I wonder if this is a movie that MUST be seen FROM the second time around?

I won two free movie tickets via a contest held at the CLASSIC MOVIE HUB website
( Yaaay! and THANK YOU Annmarie ). I grabbed dear old Dad and Sunday night off we went to the movies, for Fathom Events’ screening of Alfred Hitchcock’s 1958 classic, “VERTIGO.” The trailer:

Last Friday night when I mentioned to a bar~drinking, classic film~loving buddy of mine that I was going to see the movie, she said: “Noooo. It’s my least favorite Hitchcock. If you’re going to kill me, you’re going to have to do it on the ground. I am NOT going up those stairs!!”  What am I missing? “VERTIGO” is my favorite movie. But could I be wrong? Have I been had…been took? Had I been hoodwinked? Bamboozled? Led astray? Run amok? Does this movie warrant my father’s “Thumbs Down” during the screening?
( WHAAAT? DADDY!!! ) I swore to myself I would watch the movie objectively, this time. I would see if the pieces logically and rationally fit together in a way that makes sense. I wasn’t going to give Hitch a pass. I would not get caught up in Bernard Hermann’s sublime romantic score. That was the plan. I had my popcorn and Raisinets as a buffer between me and my emotions. Now…show me, Hitch. SHOW ME, dammit!

There might be spoilers as I ramble on the Couch here, because this really is a motion picture all classic film fans should have seen already. Not that you may like the film, but you should have seen it. So as the story begins in earnest, this is a straight~up detective mystery thing; one last job for a friend before John ‘Scottie’ Ferguson truly throws in the towel. ( JAMES STEWART’s Scottie has developed vertigo, you see, and can no longer chase bad guys ). Gavin Elster gives him the back story on his wife; trances…reincarnation…portals of the past. He needs evidence before he can have her institutionalized. We see Scottie’s reluctance: 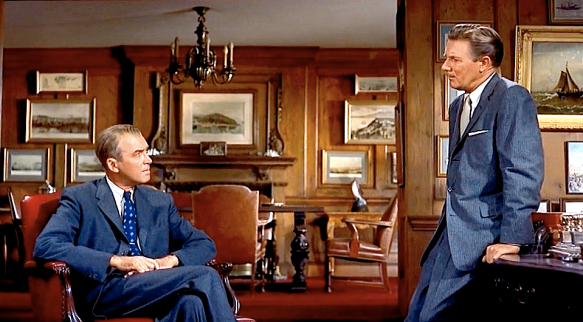 “I’m supposed to be retired. I don’t want to get  mixed up in  this thing.”

But Scottie agrees to go to Ernie’s ( the San Francisco restaurant ) to check out Elster’s wife before he decides if he’ll take the job or not. 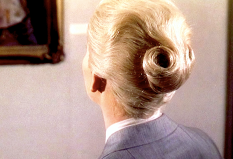 Gloriously, hopelessly, quietly deliriously and unapologetically I spiral down into the plot. I’m hooked. Now it’s NOT that I lost my resolve, mind you. But hell, I can’t fight my OWN theory…if you don’t fall for KIM NOVAK, the movie won’t work for you. 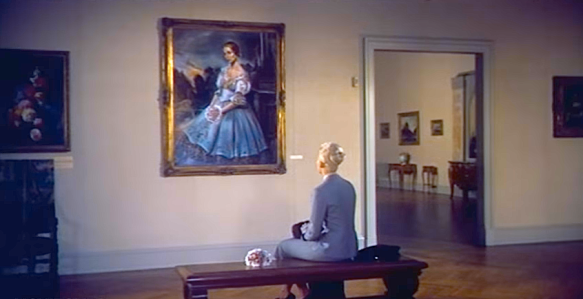 It is the following of her and vesting your emotion in her mystery that’s ~ ( at least to me ) ~ the initial lynch pin in this whole mesmerizing story. I s’pose you don’t have to fall for Novak. Be that way. There’s more twists in this tale to keep you on your toes. 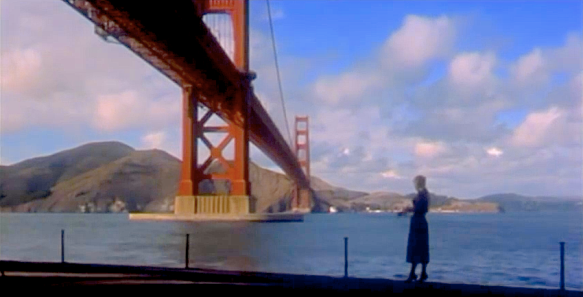 Elster dangles the puzzle and mystery of Madeleine in front of Scottie and us. Scottie follows Madeleine thus we get the scenic drive through San Francisco. As we drive with Scottie watching Madeleine, it’s as though we are watching a movie. In fact, Madeleine IS a movie.

My friend Lynn says Madeleine’s wet gloves make her look like a ghost.

Garbo comes to mind with Madeleine for some reason. Bear with me while I stretch my movie metaphor a tad more. All those silent movies that fans watched of Garbo’s…not hearing her voice, silently move about on screen…and then in 1930…we hear her for the first time. That’s kind of what we do with Madeleine. We hear all about her. She doesn’t come into the movie until maybe about 40~minutes in for her close~up. We silently follow her around, as I said…she is her own movie. Twenty minutes after that…about a full hour into the film, she’s steps OUT of her movie, and INTO Scottie’s living room…in his robe. The anticipation has been built, and there she is. That sly dog Hitchcock gets around the censors by showing her wet clothes drying in Scottie’s kitchen. When Madeleine wakes from her near~drowning we finally hear her voice…that distinctive low, husky, whispery voice of Kim Novak’s: 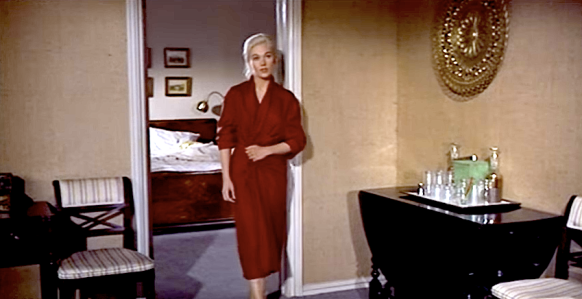 “What am I doing here. What happened?”

( Uhhhhmmm, you DO know Madeleine was really aware she was being disrobed, right? She is a movie at first. And movies are a voyeuristic experience. And we watch movies. So tell me, what makes us any better than Scottie? ) We get to ‘know’ a little more about the mystery woman. She doesn’t know why she does what she does because she doesn’t know what she does. That’s the hook.

You see, Scottie’s never been in love before and when it hits him, it’s truly like a ton of bricks.

My father says to me:

“But he’s going to fall in love with another man’s wife? What mess is that? The guy’s supposed to be his friend and he wants his wife?”

ME: “Daddy, how many movies have you seen where people have affairs? We see it all the time. You say that like that’s an unusual thing in movies. But I give you this, Scottie didn’t think this all the way through. Is he going to tell Elster ‘I love your wife, so don’t put her in an institution?’ No, he didn’t think it all the way through, but an affair is not an unusual thing.”

Yes, there IS the warm, attractive Midge ( BARBARA BEL GEDDES ). She’s competent, confident, independent and maybe the death knell to romance: comfortable. She holds no mystery.  But you do see what you’re getting with her, and that’s a GOOD thing. Scottie is acutely aware of the difference between the two women. 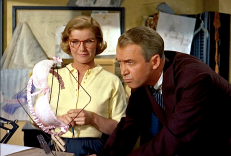 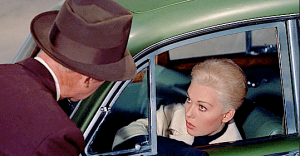 I get a little miffed at Scottie when he’s slightly prickly because Midge leaves a note for him under his door when she can’t reach him. But Madeleine does the same and he’s fine with that. 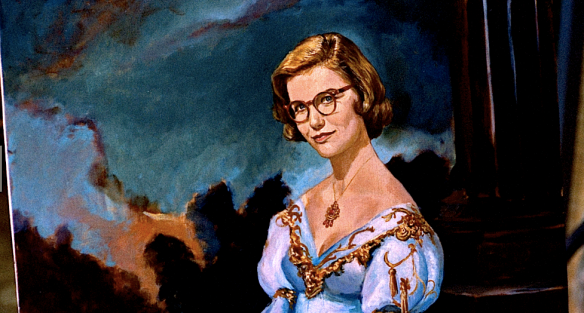 And there’s that quite heart~wrenching scene ( for me ) when Midge teasing Scottie painfully backfires. No coming back from that. He’s already too far gone.

Scottie’s Mr. Fix-It. He’s solved the mystery of her dreams and shows her this very real place indeed, the mission down in San Juan Bautista. Now that Elster has hooked Scottie, he’s got to make Scottie climb those stairs of the bell tower. Curiosity alone won’t get him up. Madeleine has made Scottie fall in love with her. And that love will make him go up those stairs, in spite of his fear of heights. Elster and Madeleine have made Scottie go outside his fear to try and save this woman he’s fallen for. By this point in the movie, I (almost) forget Scottie even HAS vertigo. But up the stairs he goes; at least he tries. Elster has played dirty pool. That’s the dastardly thing about all this. Elster and Madeleine use Scottie’s fear and love against him. Perfect.

Madeleine’s gaze into the distant past masks what she really sees.

It’s a great scene at San Juan Bautista BECAUSE Scottie and Madeleine talk past each other. We won’t understand that yet, but we will. And when we do, it will be a Wow! Hitchcock gives us two different movie experiences with “VERTIGO.” One is the “came~the~dawn” experience when things are revealed and we go“Ahhhhhhhh!” The second comes with us knowing all the pieces; the film becomes more suspenseful because we know things the characters don’t know yet.

What the heck does THIS mean? We won’t understand that yet…either. The twist is Madeleine has fallen for Scottie. And THAT is not part of the Grand Elster Plan. 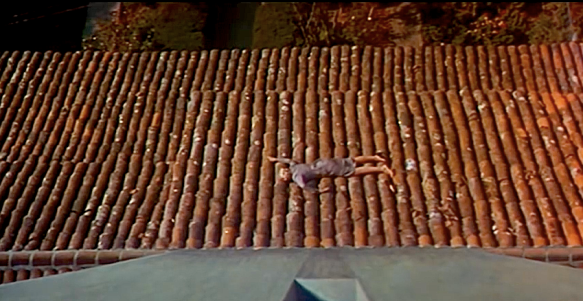 At this point you’re sad about the movie. Scottie loses Madeleine. He couldn’t save her. She jumps to her death. Scottie goes before an inquiry and you get the cold hard facts from the Inquisitor…

“He did nothing. The law has little to say on things left undone.”

…I mean the Coroner ( Henry Jones ). He breaks down the movie for you in the coldest, most dispassionate, judgmental, “just~the~facts~ma’am” kind of way imaginable. It is like cold water in the face; ice cube, tray and all. ( I know…I know: “SNAP OUT OF IT!” ) With that commercial break at the Inquest, and Scottie now off his rocker, Hitchcock brings us to the last third of the movie. This is the part you won’t like. Maybe you’ve obsessed over someone, or they over you and the memory embarasses you. This is the part you won’t like if think with your head instead of your heart. You’ll find it crazy and creepy and edgy and disturbing because you won’t allow for someone to lose control in his quest for love. You might be right. But you’re missing the heart of his movie.

Hitchcock does two things with “VERTIGO.”

(  2. ) Hitchcock takes the myths of Osiris and Isis and Orpheus and Eurydice and puts his spin on it. In both these myths, people want to bring loved ones back from the dead…only Hitch has it all take place in beautiful San Francisco.

“…Because I remind you of her?”

“If I let you change me, will that do it? Will you love me?”

We’re all pretzel’d up in the second half of the movie. I won’t go into all the details because you already know what happens ( don’cha )? And if you don’t, I want you to find out on your own. It gets crazy y’all. It gets wild. We can psychologically handle this now, but 1958…not so much. Scottie spirals out of control as this romance movie turns into a dark, film noir suspense thriller. ( Too many genres?? Ha!! ) Little things we didn’t understand, now come to light. No doubt it is disturbing. Scottie’s and Madeleine’s lives unravel.

MADELEINE: “I was safe when you found me. There was nothing that you could prove. When I saw you again I, I couldn’t run away I loved you so. I walked into danger, let you change me because I loved you.”
SCOTTIE: “It’s too late. There’s no bringing her back.”

And like Eurydice sucked back into Hell when her lover Orpheus turns to look at her,  too soon, so does Hitchcock pull the rug out from under us. It feels like a punch in the stomach. The air is sucked out of the room. The movie ends as it began…abruptly. It’s over. 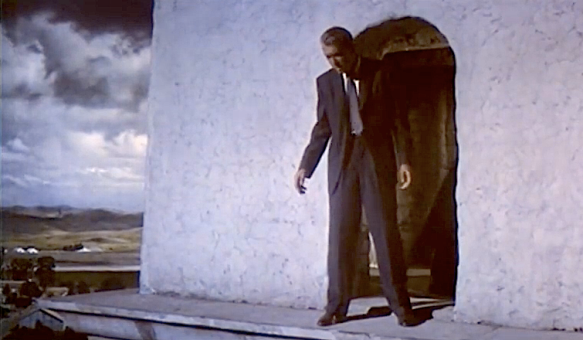 MGM’s youthful, good~natured, affable Jimmy Stewart does some interesting work in his middle~age playing complex men. In “VERTIGO” on the steps of that bell tower, he’s angrier and more insane and pitiable than I’ve ever seen him. But Stewart’s a proven and accepted legend. 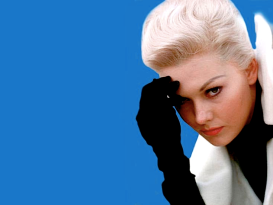 It’s Kim Novak who is the revelation for me especially seeing the movie on the big screen. Yeah, I’m a fan, but putting that aside, she does do a phenomenal job playing these two disparate women in a performance I think is still under~rated. Click here to see the Academy Award~nominees and winners for 1958. Novak shows the skill, nuance and smarts to put this over. She gives an amazing performance, and is absolutely stunning to look at.

Thanks to Fathom Events for featuring the 60th anniversary of this complicated, disturbing and mesmerizing film. It’s a movie about emotion, illogic, abandon, losing control. I think “VERTIGO” is classic film’s Rubik’s Cube with all the pieces you have to maneuver. I love it’s ins and outs and twists and turning in on itself. But this isn’t everyone’s cuppa. And I’ll have to be okay with that. Sorta.

After all, some puzzles are not meant for everyone to solve.