Terence is at it again. He of “A Shroud of Thought” is hosting his fourth annual “FAVOURITE TV SHOW EPISODE BLOGATHON.” This “is a blogathon in which bloggers write entries about their favourite episodes of their favourite classic television shows.” If you’re interested in seeing everyone’s favorites ( don’t use a “u” ~ I’m an American ) please click on “The Saint.” I participated in this popular blogathon once before with the iconic and poignant “Twilight Zone” episode “Walking Distance” starring Gig Young. But now for something different. 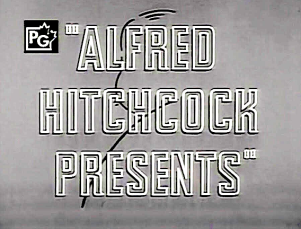 Everybody should know by now that Hitchcock’s my boy. He’s left his mark of chilling suspense on movies and tv. Thanks to the MeTV channel, I get to watch Hitchcock’s tv program nightly and this episode is one of my faves.

Here are the title cards for tonight’s episode. I apologize for the UNclarity of the screen caps. Watch along with me. I’m going to walk you through it with my impressions and observations. It will have spoilers, but it won’t have the main spoiler I will leave out. Wait, I’ll put it on another page. This is Season 7 Episode 24 of Alfred Hitchcock Presents. I would say sit back and relax, but hey…this IS Alfred Hitchcock. 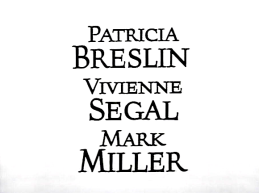 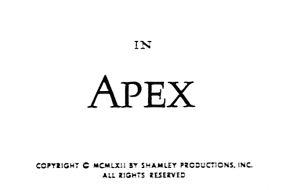 The lovely Patricia Breslin set this nice homey little domestic scene with handsome Mark Miller of tv’s “Please Don’t Eat the Daisies” fame. ( He’s also the dad of actress Penelope Ann Miller ). Patricia Breslin reminds me of Barbara Rush and Dana Wynter. And here she is, your typical 50’s/60’s scene, talking about refurnishing…and sending her man off to work. 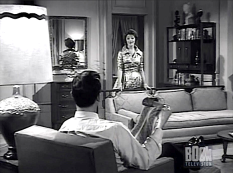 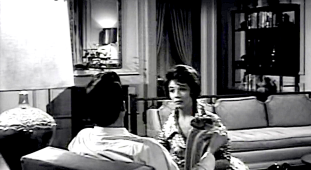 What’s he stopping for, a quick smoke? Oh snap…he lives next door? WIFE? He’s married?! I see what he did…he checked the window before going into his own house. Having an affair right under his wife’s nose. And lies to her face.

Wait, his mistress is friends with his wife? ( Oooh, that never works, trust me! ) What a reveal. This has been going on for over a year? Woweeee! The wife is played by Vivienne Segal. She’s warm and friendly. I feel bad for her.

Margo: “Clara, is something wrong?”
Clara:   “No. Nothing.”
Margo: “Are you and Claude having trouble?”
Clara:   “Not Claude. Just me. And I haven’t a     thing to go on. No mysterious phone calls. No handkerchiefs with lipstick on them. But I think he’s seeing another woman.”
Margo: “Clara, I can’t believe you.”
Clara:   “You can’t? We just had our seventh wedding anniversary. That’s when the itch is supposed to set in.”
Margo: “But you know how much Claude loves you.”
Clara:   “I know how much he says he loves me. Oh Margo, never marry a man who is even a little bit younger or poorer than you.”
Margo: “Well it’d be kind of hard to find anyone poorer.”

She owns the company, like the Countess DeLave owned Dandee Gelatine in “The Women.” There’s a veiled threat he won’t own any part of the company if they divorce.

Clara: “Dear it’s getting late and I’ve got to go   to the bakery. I promised Claude we’d have cream puffs for dinner tonight. He loves creampuffs. Don’t pay any attention to me. I’m being ridiculous.”

Margo: “You’re having creampuffs for dinner.”
Claude: “That’s nice.”
Margo:  “You were right.”
Claude: “About what?”
Margo:  “She suspects you.”

Even though it’s just dessert, hearing Margo reveal to Claude he’s having cream puffs feels like such a betrayal to me. Here is Clara, confiding her marital insecurities to Margo, and she goes and tells Claude. I feel bad for Clara. This is not looking good for her.

Margo lets him know might be in danger of losing the money AND her. Not wanting to lose either, he’s gotta kill his wife.

He can’t do it. And we see yet ANOTHER REVEAL. Margo’s playing him. Look at her thinking…how to get him back on track. ( She did say she was poor, remember? She’s been working him a year ). Leave it to a man, huh? He can barely find his socks.

Girls, if you want something done right you have to do it yourself. What the hell has Margo up her sleeve?

This was a close call here. Margo’s about ready to dope the tea when Clara busts in on her.

Margo: “Clara, you’ve gotta snap out of this. It’s just your imagination.”
Clara:   “He left his office at 10 this morning and hasn’t been back since. Is that my imagination?”
Margo: “Well, he probably had some business appointments.”
Clara:   “Then why doesn’t his secretary know about them.”
Margo: “Did you try his club?”
Clara:   “Yes. He hasn’t been there all day.”
Margo: “Well I’m sure there are a dozen explanations for it.”
Clara:   “It’s the real one that worries me.”
Margo: “I’m not saying what you’re afraid of could be possibly be true. But I do know once you decide to be suspicious of a man, you can find a million reasons for it.”
Clara:   “Margo, it’s more than suspicion. I know.”
Margo: “How do you know?”
Clara:   “I just do.”

The phone rings and Clara goes to answer it. Margo can now finish “preparing” the tea.

Clara’s mind is at ease now that she’s hearing from Claude. He was at his club meeting an old friend and tells Clara he’s sending a caddy over to the house to pick up an envelope for him.

Margo keeps Clara chatting distractedly as Clara continues to drink the bitter tea of General Yen. If it tastes bitter why are you still drinking it. C’mon man. Sloppy plotting. Quit drinking. Jesus!

Nope, she’s drunk it all…down to the last drop!!!! It’s quick acting. She’s down. She begs for help.

Margo’s takes her sweet time pretending to help. But she’s not helping. She listens to Clara dying. Damn, Margo’s cold. She wants that money. Poor Clara. She seemed like a nice woman. Margo’s pretty methodical with the clean up of finger prints and tea cups. Cool cookie this brunette. She’s about to get away but the doorbell rings. 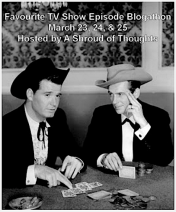 There are more great entries to this blogathon if you click on the Maverick Brothers. And surely you have favorites of your own. Leave a comment in the space below. Thank you Terence for giving us a chance to share these.

And IF anyone is interested on exactly HOW this episode of “Alfred Hitchcock Presents” ends…you need only to click on the photo below for the SPOILER. THANKS so much for joining me on “the couch”.