Hi – If you click on this section from time to time, this is the place where I’ve asked friends to write an essay about a classic movie they enjoy; give ’em a chance to express them- selves about a movie or actor/actress that resonates with them in a positive way. I promised them I’d put their name up in lights if they sent me something. So, if there’s a movie you really like from the “good ol’ days” and you want to tell folks about it, send me an e-mail at cinemavenessays@gmail.com. Your name can also go up in lights.

Trudy Ring is a writer and editor for a media company based in Los Angeles. She’s a native Midwesterner who left part of her heart in Chicago but loves L.A.’s weather and easy access to many classic film events. She enjoys almost every genre but particularly loves film noir and screwball comedy, and her favorite decades for movies are the 1930s and ’40s. When she’s not watching classic movies, she can be found seeing new movies, attending plays, reading, listening to music, or talking politics. Her favorite author is F. Scott Fitzgerald and her favorite musician is Bruce Springsteen. The film directors, writers, and stars she admires are too numerous to list.

To say Wendy loves old movies doesn’t say the half of it, but for time and space purposes, Wendy is a lover of classic films. She is definitely a 20’s, 30’s and 40’s gal. 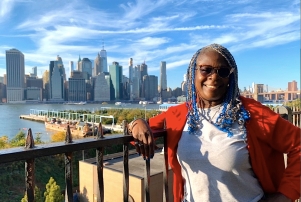 I’m a SoCal Local, born and raised. Grew up in Pasadena, California, the home of the Roses that has the eyes of the world on her every New Year’s Day for the Rose Parade and the famous Rose Bowl College Football game. We have the Pasadena Playhouse that quite a few of our beloved Classic Film stars stopped in to play a role or two. The likes of Tyrone Power, Randolph Scott, Robert Taylor, Frances Dee, Joel McCrea, Barbara Rush, Eve Arden, Dana Andrews and Eleanor Parker just to name a few… I now live in Long Beach, CA where I’m Director of Silver Screen LBC – Classic Film Club and a member of #TCMBacklot the Ultimate Fan Club.

I fell in love with Classic movies as a 13-yr. old teenage baby sitter who learned about the Late, Late Show and the Million Dollar movie after the kids went to bed and the late news ended. My first movie was “Bringing Up Baby” with Cary Grant and Katharine Hepburn. I fell in love with these two and that has not changed in all these years. I love the “Golden Age” of the Silver Screen and for me that is 1920’s -1950’s with its genres of Comedies, Romance, Action, Westerns, Suspense, Thrillers and Film Noir. My favorite male actors are Cary Grant (which I know surprises know one) Jimmy Stewart, Henry Fonda, Ronald Colman, Jack Lemmon, Tony Curtis ~ the few among the many. For the ladies, give me Katharine Hepburn, Bette Davis, Joan Crawford, Ingrid Bergman, Barbara Stanwyck, Ginger Rogers, Olivia de Havilland … I could go on and on.

I want to say Thank you to @CineMaven for the opportunity for this Truly Geeky Classic Film fan to start writing about the experiences I’m having in my Classic Film World with #MyTribe. I don’t know facts like some do … I just have so much love of Classic Film with My #ReelFamily and #ReelFriends. Hope to see you at the #TCMFF in the future or on the next #TCMClassicCruise.

See you in the Dark…

I fell in love with classic films when I happened to turn on “The Misfits” late one Saturday night when I was in high school. I’ve managed to tame my Marilyn Monroe fetish somewhat but my love of the movies remains, and my husband constantly reminds me that there are television stations other than TCM. I usually ignore this advise. ( Jeff has written a piece on Gary Cooper and Clara Bow for FLICKER ALLEY entitled “Yep, Nope and ‘It’.” )

When Robert Regan first saw “Spellbound“ he asked his mother how Ingrid Bergman could be here and across the street in “The Bells of St. Mary.” This wise woman explained that movies are not “real”, but are like snapshots that appear to move. Since then he has seen thousands of movies and loved hundreds.

Born the same day as Barbara Stanwyck ~ July 16th, Marvin’s worked 23 years at the Fountain Pen Hospital ( where modern and vintage pens are bought and sold ) near NYC’s City Hall. He loves to sing Opera ( tenor ), Neapolitan songs, oldies, show tunes, etc. Marvin also loves to draw ( cartooning/ illustration ). “I’ve been a fan of movies all my life
( since four years of age ) and when I turn on the TV my priority is always a ( good ) movie. My favorite genre is Film Noir, with westerns being a close second, but I also love musicals, drama and action films as well. My favorite actor is Gary Cooper, and Claire Trevor is my favorite actress. Billy Wilder and Michael Curtiz share the number one spot as favorite director.

Karin was born, raised and lives in Norway. She is half-Swiss, half-Norwegian and attended university in Scotland. In 2011. Karin served as the Artistic Coordinator of the inaugural Maureen O’Hara Classic Film Festival in Glengariff, Ireland. She is a classic film fan through and through. I’d say her heart lies mostly in the 1930’s with film favorites that include: Myrna Loy, Constance Bennett, Ronald Colman and the lovely Claudette Colbert.

Michele Price is a real-life jurist, a position which she is not just honored to hold, but by which she is humbled, on a daily basis. As well, she is an eager student and admirer of classic film, and has attended the Turner Classic Movies Classic Film Festival many times as well as other festivals devoted to various genres. As legal writing is not particularly entertaining, the opportunity to reference her English degree and craft something of a more creative nature is most welcome. Moreover, it is not unexpected that her favorites among the classic canon often highlight strong women: “Mildred Pierce,” “Stella Dallas” and “Now, Voyager.”

“If only hats with veils, gloves and seamed stockings would come back…sigh…” ~ Michele S. Price

There’s more to my friend Christy Putnam than her Texas-sized love for classic films. During her formative years, she spent summers traveling with her family to more than 19 states in Mexico which helped her learn to speak Spanish. As the daughter of a petroleum company executive, she has lived in the Midwest, Northeast and South. Upon receiving her Master’s Degree in English, Christy has taught college English for the last 20 years.  Her son, who is still in college working on his own degree, accepts the fact that she loves classic film and enjoys his Mom’s cooking, ( He teaches Comedy Defensive Driving . )  Christy has written about the Turner Classic Film Festival since June of 2010 as “Sue Sue Applegate” on the TCM Message Boards, The Silver Screen Oasis, as well as her blog at Christy’s Inkwells. She’s also published articles or reviews in Noir City Magazine, The Houston Chronicle, The Baytown Sun, The Sentinel, and Examiner.com, where she enjoys writing about TCM Film Festival Guests and TCM Film Festival Fans from all over the world.

Let me introduce you to my friend Sheila Schlesinger-Simon. She was an Early Childhood educator and loves to read books and watch old movies. ( brooklynoutlier@gmail.com )

Her favorite quote is from Groucho Marx:

“Outside of a book, a dog is man’s best friend. Inside a dog, it’s too dark to read.”

My friend Lindsey Wilson has been my creative partner in a number of projects for many years. A graduate of Hampton University and involved with marketing and p.r. firms in the past, she’s finally exploring her life and love of music. She is a singer/songwriter with a band of her own: ( the Reckoning ) and original music ( urban folk rock with conscious lyrics ). But she also loves movies. We’ve had so many conversations about stars and plots and scenes. She’s graciously decided to write down her thoughts on one of the great movies from the 60’s that might be ahead of its time. This is her contribution to yet another one of my projects. This blog.