I will trade Delon, Belmondo, Trintignant, Aumont, Jourdan, Montand, Chevalier, Boyer…and maybe even Jeanne Moreau for one night with JEAN GABIN. I’ve never heard of this film. And I came away from it saying “Viva La France!!” “Viva GABIN!!” You think I’m crazy? You haven’t seen this movie… 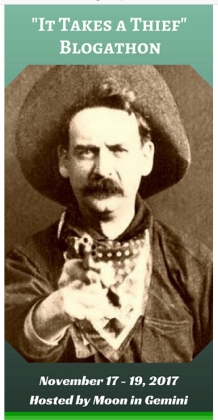 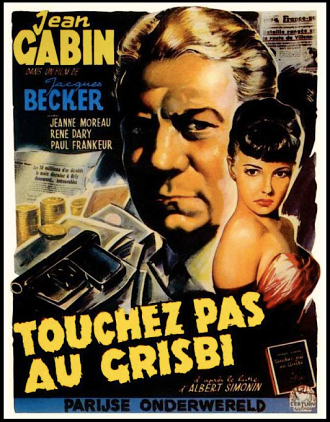 The film is “TOUCHEZ PAS AU GRISBI.” My review is one of the happy participants in Debbie Vega’s “IT TAKES A THIEF” Blogathon over at her blog ~ Moon In Gemini. Crime does not pay. At least that’s what Hollywood WANTS us to believe. With my pick for this blogathon, I look at what happens AFTER the crime. Moreso than just “honor among thieves”, this movie is the story of friendship. 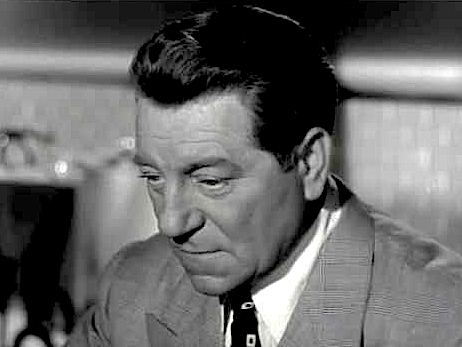 She’s there for him before, during…and after

The head of the gang is MAX played by Jean Gabin. Nope, he’s not the pretty boy~type in the Delon / Jourdan mold. He’s not handsome at all by Hollywood-standards. He’s a man; a ruggedly beautiful and masculine man. You know he knows what to do…on a heist or in the bedroom. The movie

shows us Max’s life and how he walks through his world. He’s a take-charge-take-care-of-business kinda guy. Nothing phases him. He moves with assurance. The other men look to him as their leader. He walks confidently through the underworld. ( …And dashingly wears the hell out of double breasted suits. ) The thrust of the story is he’s pulled a job netting a couple of thousands in gold bullions; but his friend and partner is kidnapped by a rival gang and Max must pay a ransom to get him back…those gold bullions. 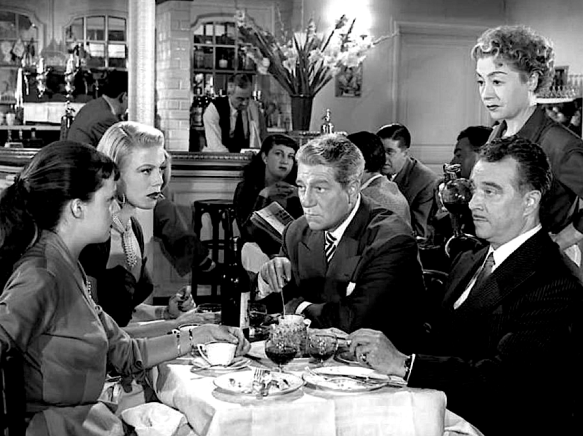 Max and the gangsters are middle~aged men. At first blush I thought “what do these old guys ‘think’ they’re going to do with these young girls.” Silly me…it’s Jean Gabin. And these ‘old guys’ are just fantastic! The crux of the story is the friendship between Max and his dear impetuous friend of twenty years, Riton ( poignantly played by René Dary  ), a man who perhaps is trying to hold onto his youth with his affair with a young chorus girl. She’s too young, and too pretty for him, but he wants her.

The Foley artists must have had a ball doing this movie; I felt like I had superhuman hearing. Every footstep on cobblestone…every bottle uncorked, every French bread torn in half was pronounced. The sound guy made me hungry. And the movie took its time. No one walked fast or talked fast. There was a leisureliness to the whole film. And director Jacques Becker wasn’t afraid to take his time either in letting scenes play out. We

see Max make a snack for him and Riton…getting the sheets and blanket for bed… brushing his teeth…spitting out the water. We would have never seen that in an American film of the 40’s; taking the time to show the whole procedure; and especially not today. Nothing going on? Ha! This quiet scene of two friends together says EVERYTHING about them. I liked their friendship. Max discusses they are old men. Time to retire. Time to face that. Riton has other ideas: Josy. 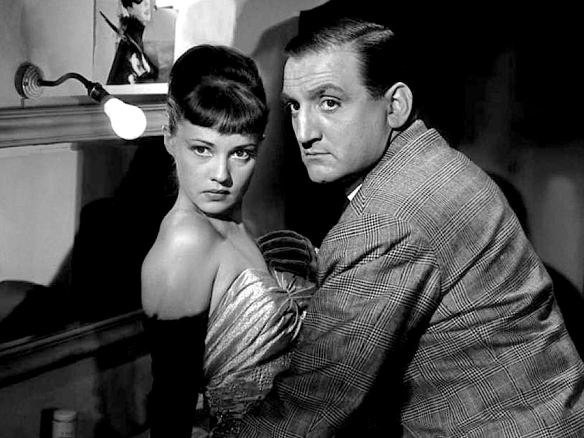 Josy has other ideas herself…

Jeanne Moreau plays Josy the chorus girl. And Moreau is dynamite. Oui oui, the cotton candy that’s Bardot would shortly be around fame’s bend. But for now we’ve got Moreau, and she commands attention in even this small early role. I remember my friend Wendy ( who has an essay or two here on my blog ) saying:

“I could not take my eyes off of Jeanne Moreau. It’s funny, I saw her name in the credits, but I was absolutely sure she was in a bit role. So as I watched Josy, I said to myself:  “She just draws the camera to her! I wonder who she is? I’m going to have to look her up after the movie.” Duh.”

Friendship. Friendship. It’s the perfect, blendship… I enjoyed watching Max’s and Riton’s friendship. I believed it. Max loves Riton, even if he’s a pain in his neck, bailing him out of scrapes. They probably were together as young men robbing and stealing. The only one who Riton trusts completely IS Max. There’s a point in the film where Max telephones Riton and tells him NOT to go with the guys in his room. Riton doesn’t question it, he just immediately does as Max says. Max is the only one who could tell him Josy is NOT for him. Ev’ryone has that one friend that tells you the tough stuff; the stuff you don’t want to hear.

..And you take it

When Max needs to get some answers, he gets some answers. He doesn’t get all wound up like our Cagney, Bogie or Eddie G. Not a lot of talk…he just bitch~slaps you right in the kisser. They all put him in a predicament. Now he’s got to get out of it and they’d better talk. As I said, I loved the friendships and loyalties in this movie.

Max and his young henchman Marco ( Michel Jourdan ) kidnap one of the rival gang members who has kidnapped their friend Riton. 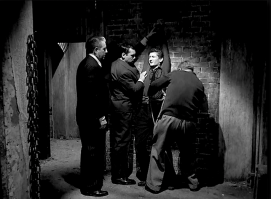 These guys may look sedentary, but they move like Baryshnikov when they have to get going. When bad guys come to Max’s apartment he escapes out a window down a chimney over a rooftop down a staircase up a fire escape through a…well, he didn’t actually do all that. But he sure does hightail it outta there quick fast and in a hurry. Jean Gabin is thoroughly watchable; in command…sexy, loyal. In fact, we get to know each one of his allies, even if for the briefest of moments. This is such a gem of a movie. We’re watching a family of friends. 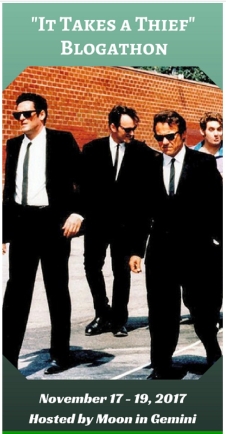 Thanks for reading! If you want to read more entries about how ‘It Takes A Thief’ you merely have to click on this photo above. Hell…it’s a lot easier than robbing a bank!