It’s a jungle out there.

Our Hollywood-American movies have a strong moral code: THE–BAD–MUST–PAY. And bad women must pay…dearly. Whether the law metes out justice for our deeds or what’s in our hearts ( “The Postman Always Rings Twice” “A Place In the Sun” ), the Moral Code in movies is inescapable and apparently, essential. It runs through our American cinema, literature and souls like an artery to the heart.

I was stunned by “THE MACOMBER AFFAIR.” I first saw it at the 2012 TCM Film Festival and it stayed with me throughout the rest of the festival. Now, I might not have the right words to describe how I feel about this movie ( my heart is so much more eloquent than my brain ), but here are the words I managed to pull from my heart’s brain:

Hemingway gives us the story, and director Zoltan Korda takes us inside the disintegration of a marriage by using the safari as metaphor. Hey, this marriage is over long before any lions come on the scene. GREGORY PECK plays the great white hunter, Robert Wilson. The movie’s story unfolds in a flashback which plays out as Peck ponders what to put in a police report. I like the inexorability flashbacks give to events. No going off the beaten track. No forks in the road. What happens happens. You’re riding this trolley to the end.

MY MACOMBER IS SPOILED – IT WAS SITTING IN THE HOT AFRICAN SUN WITHOUT A HAT! SPOILERS AHEAD

Marriage is a partnership of love, support, desire and respect. ( You can prioritize the order of these qualities as you see fit. ) The Macombers look good on paper. They are an attractive, successful and wealthy couple. ( Hey, safaris ain’t cheap. ) They have that good-natured ‘Nick & Nora’ repartee thing going on in the beginning. They are played by JOAN BENNETT ( Margaret ) and ROBERT PRESTON ( Francis Macomber ).

When Peck compliments Preston on his attractive wife: 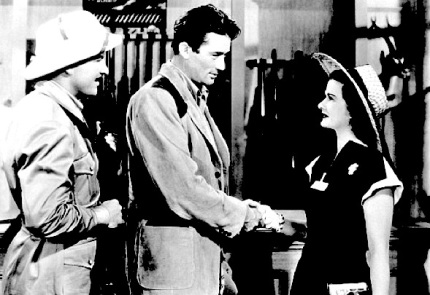 MR. MACOMBER: “Wilson, you don’t know what it does to a man’s ego to constantly be reminded he’s married to a beautiful woman.”

MRS. MACOMBER: “Usually what it does to yours darling, air does to a balloon.”

Things start off well amongst the three of them. Francis Macomber ( Preston ) is confident and deferentially concedes to Wilson ( Peck ), willing to learn from his safari guide. I liked the details of safari-ing; the talks of the types of guns and all the verbal attention to details. My guess is the attention to details is due to Hemingway’s passion for hunting. I liked the aplomb and believability Peck delivers as though this La Jolla, California native was to the safari born. Macomber is so boyishly cute as the African air and the thrill of the kill rekindles his attraction to his wife:

“I believe I’m in love with you again.”

Maybe there was a touch of hero worship from Macomber to Wilson. I’d say there is definitely an attraction between Wilson and Margaret Macomber. I think the flirtation is somewhat harmless; maybe part of the whole travel package of the safari – the charm Wilson thinks wives expect out there in the jungle while their husbands prove their manhood against lions and tigers and impalas, oh my! I like how Wilson calls Margaret “a beautiful sensation.”

But when things go down hill, they go down like a water buffalo.