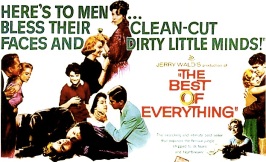 Lovin’ pre-code. Adult, frank storylines, lingerie for the fellas and liberated women ( who, of course, have to get married by the end of this playing at work thing ). But “She Had To Say Yes” is such an eye-opening, jaw-dropping discovery, its twisted sexual philosophy had me on a roller coaster ride for all I’m worth.

A clothing manufacturer hires models for his clothes but also uses them as customer girls to “entertain” ( strong air quotes here ) his clients. The company needs new blood in the girls department.

“Is it my fault because we’ve got a bunch of worn out gold diggers as customer girls?”

Regis Toomey, head salesman, has the brainstorm of an idea to dive into their stenographic pool and have those girls date their out-of-town buyers. Toomey’s idea does not include his fiancee, Loretta Young. He’s just one, big, fat-headed double-standard.

R. TOOMEY: “Say, you don’t think I’m going to sit around and watch the future Mrs. Tommy Nelson being rough housed by a bunch of out-of-town buyers, d’ya?”

R. TOOMEY: “Now listen honey. You’re the only girl in the world that means anything to me. And if there’s any man-handling gonna be done, I’m the guy that’s gonna do it, get me?”

See? He loves her. 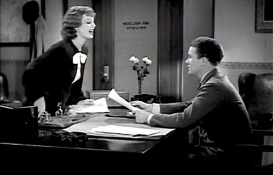 R. TOOMEY: “Seven hundred and forty-five bucks commission all because Birdie wiggles when she walks.”

But soon is the time, for all good girls, to come to the aid, of their fiancee …and get pimped out by him. Toomey needs a big sale and the hefty commission will go towards their wedding trousseau. Young’s reticent but agrees; this decision puts her in the path of that ubiquitous perennial 1930’s favorite: Lyle Talbot, who takes her out for a nice dinner:

L. TALBOT: “Maybe not…Oh, if you could only read my mind.”

L. YOUNG:  “I’d probably slap your face, get right up and run home.”

But he’s a wolf in wolf’s clothing. He paws her as soon as he gets her in his hotel room to….uhmmm…type some letters.

“We’ve agreed to take care of their orders. They’ve got to look after their own morals.”

Young fights off almost every man in this movie as they all seem to be sexual predators. She needs somebody on her side. All good girls have great gal pals, and wise-cracking Winnie Lightner is no exception. She’s on the order of a Pert Kelton, or Aline MacMahon…zinging those one-liners like a fast ball over the plate. She goes toe-to-toe with cad, Toomey on behalf of Young:

W. LIGHTNER: “Sure he can explain. They all can!”

W. LIGHTNER: “Say listen. If I did what I felt like doing right now, you’d look like you got kissed by a trolley car.”

The see-saw Young goes through with Talbot is really dizzying. When Talbot realizes she is NOT acting and IS a good girl, he plays by the rules with her ( aka no more pawing, he’ll chastely wait ).

As the plot progresses, he mistakenly believes circumstantial evidence that she HAS gone all the way with another out-of-town buyer Hugh Herbert. ( Yeah that Hugh Herbert, but not so squirrelly. ) It’s not what it seems.

Talbot wants to release the hounds and get her in bed. She owes him. She cheated him.

1…2…3…4…How do men get that way? Virginity is a commodity both men and women bargain and vie for. As soon as it’s suspected she might’ve given “it” away, the men turn on her like a dingo with a baby. Their attitude turns on a dime so fast it makes my head snap. Toomey is still fixated on her; well…not on her but on wondering if she’s really gone to bed with a buyer. No, they’re no longer together but he still wants to know. What? And if she has, she owes him. Owes?! How crazy… He drunkenly goes to her apartment to have her any way he can. It’s an uncomfortable scene:

“Ahhhh, you’re just a customers’ girl, huh? Playin’ the field …takin’ them ALL on….My money’s as good as theirs. You just close your eyes and pretend I’m a buyer. I’ll take you this way. I’ll take you any way you want it.”

Talbot, who was nice to her, suspects her of sleeping with another man and now tries to — What the hey…

L. TALBOT:  “Pretending to be Little Miss Virtue in person.”

L. TALBOT: “Yes I’m insulting you. From now on you can give somebody else the runaround!”

The movie’s message is kind of whack for women back in 1933:

Harumpppph! Things ARE better today, but sometimes I’m not so sure …  Is this movie a cautionary tale for “girls to stay home” … Is this a movie where she should sit and wait for him to put a ring on it? Is this movie lauding Loretta Young’s integrity in holding out? Is this movie espousing all men are creeps? Is Gregg shorthand better than Pittman? What goes on here? The end of this movie is a topsy turvy twist you’ve got to see for yourself…so you can tell me what I saw.

Yet even with all its “mixed messages” I do like this movie. Any movie that makes my jaw drop is a keeper, even if I start screaming. But now I really want to see more of Loretta Young. She’s believable. There is a sincerity to her performance. She’s very natural.  How did I get snookered into the blinding blondeness of Harlow …the dark sable of Kay Francis…the intelligent etherealness of Harding…the androgynous exoticism of Garbo…the American glamour of Shearer…Lombard, the chameleon who could turn screwball into serious business? I’m working my way towards Colbert but am still light years away. It’s the early 1930’s and yes, the boys are doing their thing…but it’s the talented ladies who have my attention. Am I really only now setting my near-sighted high beams on Loretta Young?

You might think I’m stretching the point a bit, but I think Loretta Young has a bit of a lot of those gals all rolled up inside that doe-faced visage of hers: 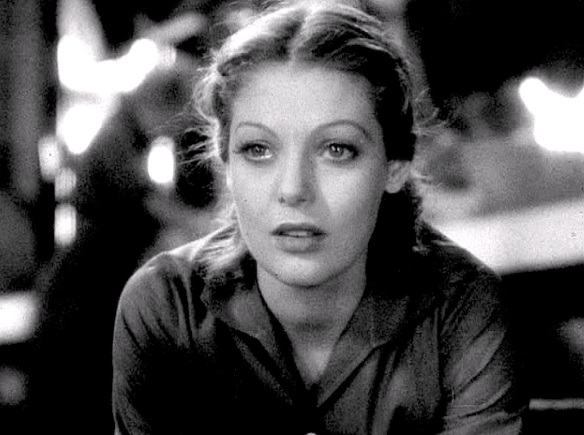 She can be glamorous, definitely classy, certainly smart. Her sex appeal is subtler. Even when she’s working class, she’s not brash ( though she WAS pretty tawdry in “Born To Be Bad” ). Her quiet elegance is a through line in her career. I am woefully full of gaps when it comes to my familiarity with this 50’s-tv icon’s early career. But in the movies, Loretta Young has got to be one of the most put upon girls of the 30’s. ( It’s gotta be them there eyes ).