I believe in monsters. Don’t you?

If they didn’t exist, how could Universal Pictures be able to feature them as a hallmark of their brand? Why, in this blogathon alone there are several entries covering monsters. If you click on The Universal Blogathon banner you will find those entries and many other genres for this Halloween weekend. This is the way you end an October. I’m doing a double whammy. First I talk about the schlocky “Cult of the Cobra” and I’m going to continue the thread of the monster genre with my entry: “FRANKENSTEIN MEETS THE WOLF MAN.”

Just don’t try and do a geneaology chart linking up Colin Clive with Basil Rathbone with Lionel Atwill with daughters of, and sons of…well, you know.

I think “Frankenstein Meets The Wolf Man” is a good representation of the genre and has a solid cast including Lon Chaney Jr., Bela Lugosi, Patric Knowles, Ilona Massey, Dennis Hoey, Lionel Atwill, and Maria Ouspenskaya, who don’t play the movies for laughs. They’re not giving us the snide-eye wink. And if they can play it straight, I can give them my belief. Let me give you the jist of the plot: 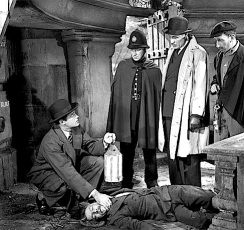 Grave robbers disturb Lawrence Talbot’s ( Chaney Jr. ) final resting place. The combination of the full autumn moon and wolfbane ensures Larry turning into his old curséd self again. Lycanthropy rears its furry face. He escapes the tomb and kills a police officer. When he changes back to Talbot, he finds himself in hospital. In charge of his care is Dr. Frank Mannering ( Knowles ) which makes me smile because he was in the original ( “The Wolf Man” ) with Chaney, but played a different character. And he’s one of my ‘go-to’ boy-next-door types ( born 11-11-11 for trivia f.y.i. ). Back to the story…

Dr. Mannering is convinced Larry needs psychiatric help because of statements like this:

“But he doesn’t understand. There’s a curse upon me. I change into a wolf.”

Sadly, it takes three men to put a strait jacket on Talbot. The struggle is a sad scene to fade out on.

Larry Talbot ~ The Wolf Man. It never ceases to amaze me to watch his transformation 1940’s-style.  And it’s ultimately this that is the sad and tragic thing to me about him. 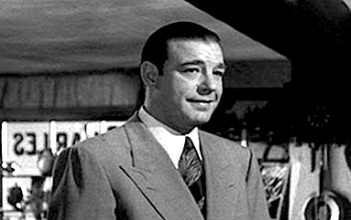 Imagine your body betraying you. Imagine an insatiable and uncontrollable bloodlust taking over you, compelling you to do things against your will. Imagine your only peace is death. This is what he suffers through and wants to avoid at all costs.

It’s Old Home Week for Larry. He’s now the man-killing wolf man, running for his life as the townspeople chase him with their usual arsenal of mass destruction: lanterns, lit firewood, yelling and arm-waving. During the chase, Larry falls through a crevice into some sort of underground, torched and frozen rubble of what looks like…a laboratory. And encased in ice…shaken but not stirred, is the Frankenstein monster.

Here is where we tie in and hitch our wagon to the other Monster mythology. What I want to know is what would possess Larry to dig out this unfortunate creature. It’s not human. Chances are it cannot speak. Why? I’m willing to forego any questions if it gets me here:

Larry and Maleva seek out Dr. Frankenstein. Maleva? ( Maria Ouspenskaya ). Oh yes. The old gypsy woman is back on board in this sequel. She still feels guilty that her son, Bela, caused Larry to become a werewolf. If she looked closely at the Monster she would see it’s her dead son Bela. But I’m not bringing reality into this. Maleva thinks Dr. Frankenstein might be able to help Larry find release. The good doctor is dead. But, he’s got a lovely daughter ( Ilona Massey ) and she does have access to her daddy’s lab records….. 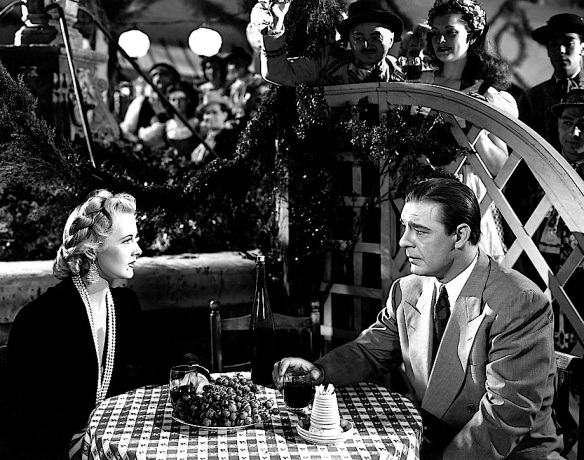 Wine and dine the daughter of Frankenstein. But she wants to forget her legacy too.

There is a three-pronged tale going on here; tangled skeins of plot criss-cross each other. It’s complicated. People are working at cross-purposes and I like the dramatic tension of that. At the heart of the film is The Wolf Man. He wants to die. He can’t make it any plainer than this. But on the other hand there’s Doctor Mannering; a man of science he’s promised to destroy the Monster but can not bring himself to deny Science. Maybe he has a key to something the good Dr. Frankenstein missed in his experiments. And what are the Monster’s wants? He’s controlled by just impulse. I don’t know that he WANTS to kill, but just can’t help be too rough with people. And the fear factor. The townspeople fear him, his brute strength, his being made from the Dead. They practically kill themselves running all over each other to get away from him. 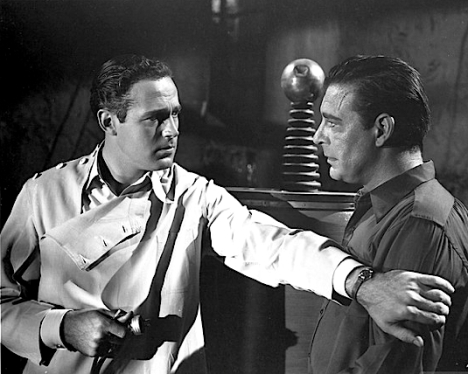 Larry Talbot: “But that’s the secret of life. What good does it do me? I’m not interested in life. I wasn’t created artificially. I’m a human being. I’ve got real blood in my veins. What can we do to end MY life?!” 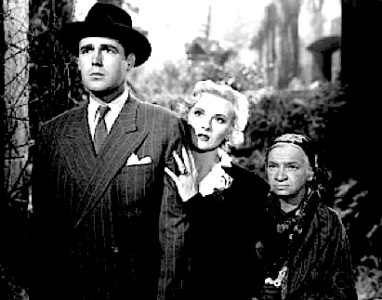 Maleva: “He’s not insane. He simply wants to die.”

Dr. Mannering: “I can’t do it. I can’t destroy Frankenstein’s creation. I’ve got to see it at it’s full power!!” 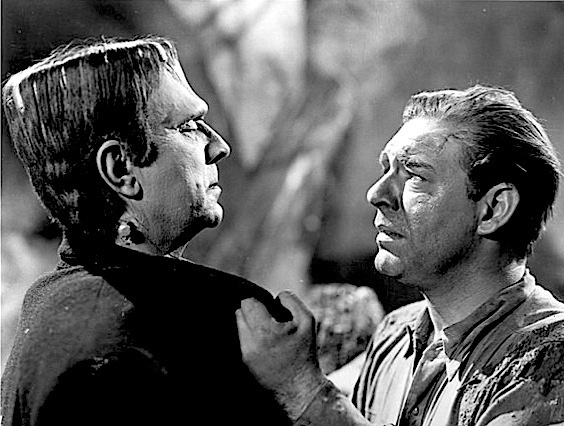 Life and Death ~ Two sides of the same coin

I’ve got two favorite scenes in the movie. Yes, of course one is when the two actually brawl. The Jets and the Sharks were never like this. The Monster has a friend in Larry Talbot. But when Larry changes into the Wolf Man, all bets are off and it’s a battle royale in the laboratory. ( Laboratories never come out intact in these kind of films ).

But my favorite favorite comes during the Festival of the New Wines scene. Ho boy, what a scene. It all starts out okay with much singing and dancing. Don’t ask me where they got the orchestral arrangement from or the full-blown chorale singing. It sounded like the Mormon Tabernacle Choir was up in that village. I told you, I don’t ask questions; I just accept there’s a musical number in a horror movie ( ?!! ) Larry gets a bit testy and high-strung with some of the song’s lyrics and tries to bust up the party, just causing a scene and looking out of a place in his double-breasted suit and long pants.

Then all hell breaks loose when the Monster comes to town. My God, people lost their minds screaming and running and jumping and trampling each other. They could easily outrun him; I don’t think the Monster could run faster than a toddler, but it’s mayhem. There’s a shot that I just played over and over again. Director Roy William Neill has the camera behind Lon Chaney Jr. and it’s on a crane. The camera rises behind him over his shoulder sort of shaky like to see in the distance, the Monster.

Talbot takes charge of the Monster, gets him in a wagon. ( No, we don’t actually see the Monster raise his ton of weight into the wagon…or bend his knees even ). But he’s up in that wagon and Larry hauls ass. The team of horses bolt through …the town, barrels of wine fall out, knocking down sets, with people screaming and running; the sound is incredible in this sequence. This short burst of an action sequence may not rival “The Hurricane” “Green Dolphin Street” “San Francisco” or “The Rains Came.” But it’s cool and dramatic.

Here is the movie trailer:

I do wish Boris Karloff had played The Monster since I always like originators but honestly there’d be nothing for him to do in this film. He’s not eliciting any pathos as he did in the first two Frankenstein pictures (“Frankenstein” “The Bride Of Frankenstein”). Bela Lugosi plays him this time, and all he really has to be is just there. That said, I like this movie and how seriously it takes itself – not in a self-important way but in a way true to itself. I was engaged by the goings on and the intersecting plot lines. Good production values. I was touched by the poignancy of The Wolf Man truly wanting to die. And what a promising monster mash-up to have these two monsters meet. It’s like “King Kong vs. Godzilla.” Or Bette vs. Joan in  “Whatever Happened to Baby Jane.” Today is the first day of the Universal Blogathon. Elementary, if you click on Holmes and Watson you can read some more great entries that will give you chills and thrills this Halloween weekend. Have fun!