Bette & Barbara. Myrna & Irene. Ginger & Norma. Doris & Ingrid. Lana…Rita…Ava. See, I don’t even have to give you their last names. You know immediately who I’m talking about. They are Stars. Their brilliance shine like beacons through the decades. And they garner new fans year after year. But there are The Others; those who are just as attractive, just as talented, but bridesmaids…just under the radar of fame’s klieg lights.

And such is the case with FRANCES GIFFORD. 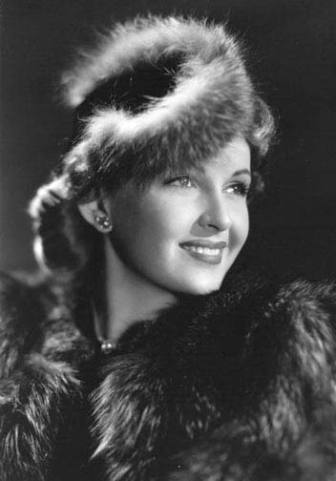 I want to remember Frances Gifford today. I find her such a pleasant presence when I see her in a film. Gifford holds her own standing next to many of Hollywood’s leading ladies, as she plays the second lead. There’s a maturity, grace and gravitas to her that she imbues her characters with. She’s warm and friendly, like a favorite teacher you might’ve had. She’s beautiful; oh, not in a sultry Ava/Rita-way, bombshelling the heck out of our senses a la Harlow or Marilyn. Gifford has a quiet unadorned beauty, a great voice and gorgeous smile. And if given a chance, can show her talent. 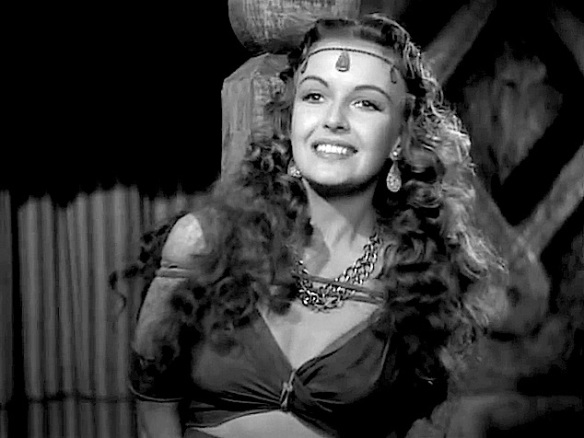 I’ve yet to see her in her hit serial “Jungle Girl” or check her out in  “Tarzan Triumphs” ( my New Year’s Resolution ) and admittedly much of her earlier work was not in very distinguished films. ( Hey, I think I spotted a glimpse of her looking into a compact mirror in “Stage Door” and just saw her in “Hold That Woman!” and western “American Empire” just to get these last two under my belt and outta the way ).

Things begin to break for her in 1943 when she lands a featured role in MGM’s “Cry ‘Havoc‘.” She holds her own with seasoned performers – 30’s queens Joan Blon-dell and Ann Sothern, and Margaret Sullavan; also with Marsha Hunt and Fay Bainter as they play nurses stationed in the Phillippines during WWII, battling illness, the enemy and…each other.

Gifford stars opposite the statuesque Esther Williams in “Thrill of A Romance” (1945) crack-ing wise as Esther swims…and then ap-pears in a silly, early Ava Gardner racetrack comedy called “She Went to the Races“  (1945). Tough competition those gals with a big MGM build up behind them; but Gifford doesn’t get lost next to Ava’s sensuality and Esther’s healthiness. 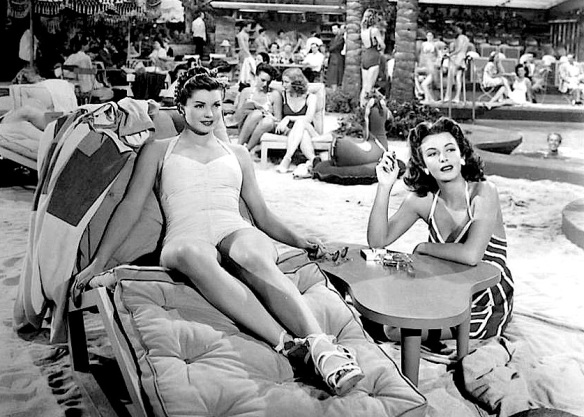 Also in 1945, Gifford has a very substantial role as an understanding rural school teacher in a Norwegian community in Wisconsin during WWII in “Our Vines Have Tender Grapes.”  (…And yes, you will believe Edward G. Robinson as a Norwegian farmer because Eddie G. can do anything. UH, unless you are Norwegian…then it might be a whole ‘nother matter entirely). She’s very good with the children – maternal, firm and sensitive. Her character has dreams of working in the Big City and won’t let romance with the local newspaper man, James Craig, derail plans for what life has to offer her…’till the last reel. She handles drama ably. 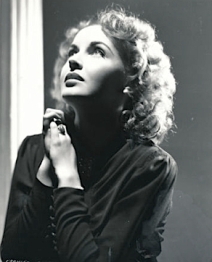 One of my favorite films of Gifford’s is “The Arnelo Affair.” She’s lovely here, all tortured longing for her distracted workaholic husband. His inattentiveness leaves room for her to come under the charm and spell of John Hodiak ( who wouldn’t, right ladies? ) She does a very good job in this film and I’ll write about it in more detail in a few weeks when my series of essays covers Extra-Marital Affairs in the Movies. 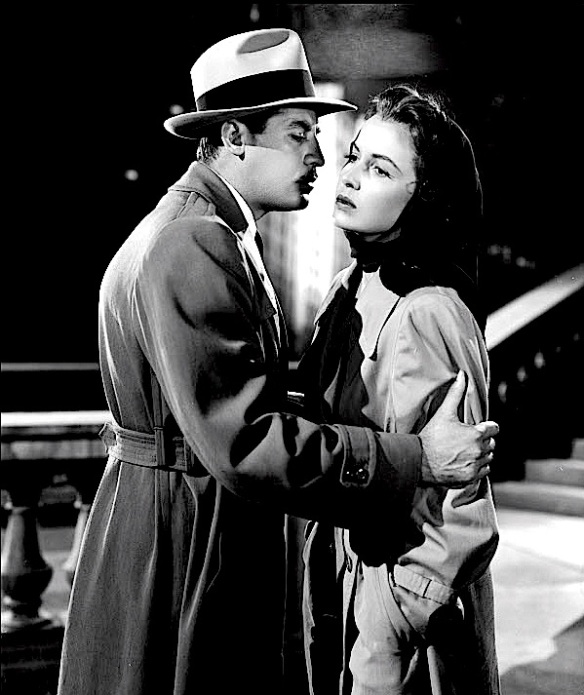 I think Gifford really shines in “Marriage Is A Private Affair” ( 1944 ).  The movie stars Lana Turner and John Hodiak. Yes, Lana is at her most Lana-ish, all eyes on her, no doubt; she’s cotton candy. But Gifford’s quiet elegance has a pull of its own that is very effective. There’s a poise about Gifford that I see from her handful of scenes. She has a quick quip and a beautiful smile. But there’s something more about her. In “Marriage…” she plays Sissy Mortimer, married and having an affair with one of her husband’s alcoholic business partners.

Later in the movie Gifford’s lover ( played by Hugh Marlowe ) brings his new wife to the dinner party. The scene was brilliantly laid out by director Robert Z. Leonard. I was very impressed with how he allowed each character’s moment to play out simultaneously as the scene progresses. You, the viewer, have many places to look: the guilty lover, the unsus-pecting husband, the knowing friend, and the lovestruck bride. Gifford holds on until she can’t handle it anymore. She throws caution to the wind while remaining controlled, drin-king heavily at dinner. She takes digs at him, knowing more about his habits than their friendship warrants. With each dagger of implied intimacy Gifford throws, she looks more and more triumphant. She cannot stop herself in front of friends, her husband and the new wife. The movie may be Lana’s, but the scene is Gifford’s all the way. Her implosion is a wonder to behold.

She was married and divorced to actor James Dunn ( “A Tree Grows in Brooklyn” ). On New Year’s Eve of 1947, Gifford was in a terrible car accident which left her with head injuries that pretty much ended her career. She did a few films and tv after the accident, but it was pretty much over for her. She wound up in the Camarillo State Mental Hospital due to the effects of her brain trauma. She was discovered in the 1980’s working at the Pasadena library, living a quiet life far from her heyday in the movies. She died of emphy-sema on January 22nd, 1994 at 73.

So, why Frances Gifford, you say?  Why not Ruth Hussey or Virginia Grey or _________ ( you fill in the blank. ) Well I say, why not? You only have to read blogathons re: character actors ( “What A Character!” ) to understand classic film buffs’ love for the famous and the obscure.

For the life of me I can’t figure out why Frances Gifford could only reach a certain rung of the Hollywood ladder. I guess a myriad of factors come into play in what must be the pure, plain, blind, dumb, luck of the draw of making it in Hollywood. Nothing branded her; she didn’t wear a peek-a-boo hairstyle or a sarong. She didn’t have “Oomph!” or an overbite. The bench was very deep in Hollywood back then, with more talented actors than there were good scripts to go around I suppose. Moguls’ stables were packed to the gills. As my friend Sheila says: “Everybody worked.” I might not be a good enough writer to make a great case in defense of Gifford’s unjust neglect. You can read more about her here, in an article Moira Finnie wrote a few years ago. ( She includes a nice short scene featuring Gifford ).  I can only hope to tickle your curiosity a bit. I especially want to remember Frances Gifford today and tell you a little about her if you’re not familiar with her. I find her earnest and sincere and I feel her warmth.

And most importantly, I believe her. Whether she’s happy or troubled; a nurse or teacher or socialite or wife, I believe her. And I guess that’s the best criteria any fan can ask for.