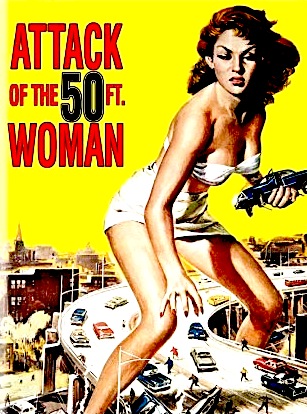 Yes, you’ve seen “THE ATTACK OF THE 50 FOOT WOMAN” about as many times as I have, though I may have the jump on you being a Baby Boomer and have been watching old sci~fi films a little longer than you. I hope with this Halloween post here,  you’ll let me take you through this great ol’ cult classic through my own bloodshot, candy corned eyes. I’ll be all over the map, not in much chronological order. But no matter. You know this movie…you’ve seen this movie…and you’ll know what I’m talking about ‘cuz there’ll be spoilers galore . . . 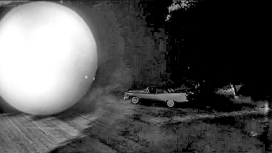 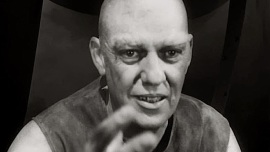 Allison Hayes ( as Nancy Archer ) is a married, wealthy, alcoholic woman~on~the~verge~ of~a~nervous~breakdown because of her husband Harry’s affair with Honey. AND to top it off, she claims she’s seen an alien.

She’s become a bit of a laughing stock in town…to be pitied and tsk’d tsk’d!

She has a waist like a wasp, and dig those crazy striped peddle~pushers she’s wearing. Her make-up’s on pretty 1950’s thick. She reminds me of the Queen Onfale from “Hercules Unchained.” Her husband Harry does the typical move of telling her EVERYthing is her imagination. He tries to smooth and cajole her into not believing what she sees and feels. She just can’t quit him.

Seems like there’s is one crazy tv channel in this one horse town. What kind of news broadcasting does KRKR-TV do? It’s geared specifically to Nancy and her alien sighting:

“Was he pink with big ears and tusks…Nancy Archer finally found a man from out of this world who will love her.”

What the??? Journalism pre-Fox News.

Nancy’s nemesis Honey ( Yvette Vickers ) is the girl Harry is coo-coo for coco puffs about. Yvette has that Joey Heatherton / Tuesday Weld / Eartha Kitt / Gloria Grahame  / Lola Falana c’est si bon petite feline vibe thing going on. These gals are fighting over Harry. Harry? Actor William Hudson plays the prince of a prize; just a lying cheating husband who wants his Honey and Nancy’s money. ( You can do better girl!! ) The only one loyal to Nancy is her butler Jess ( played sympathetically by Ken Terrell. ) He’s as loyal to her as Max is to Norma Desmond in “Sunset Boulevard.”

Sheriff Dubbit and Deputy Charlie go out to investigate Nancy’s story but find nothing. The deputy is no help being the corn~pone comic relief cross between Wally Cox and Earl Holliman. He does take Honey out for a whirl on the dance floor later when he should be doing police business.

As Nancy and Harry drive out of town to see if they can spot the man in the flying saucer who she saw earlier, the landscape looks like they’re driving on the moon. I love day-for-night shots  in these old 50’s movies with crickets chirping in the background to lend authenticity. But what kind of non~self respecting woman would run TOWARDS an alien space ship? The kind who really needs to prove to her husband she’s not alcoholically mendacious. And what kind of weasel of a husband would drive away like a bat outta Hell in a Jetsons convertible and not stay and save his wife? A weasel. He hightails it back home…packs a bag…fights the butler and picks up Honey Bear ( Yvette Vickers ) he’s been making time with. It all looks so tawdry, and low-budget. I love it.

Nancy fights for her life from the alien attack. Actually it doesn’t really look like much of an attack because this thirty foot giant moves as slow as molasses. He goes for her diamond
( Kardashian style ) but at least he takes her home when it’s all over, which is more than I can say for Harry. He’s left her on the roof of her pool house. And Nancy’s in a state of shock..stone cold sober.

Harry’s still a prince of a fella. When he goes into Nancy’s room to give her an overdose of medication so he can finally be rid of her and get her money, he turns on the light and sees Nancy’s hand is GIGANTIC. A gigantic papier maché hand. The Nurse is cross-eyed with blood~curdling screams behind him:

That Harry was in the room with that big fat hypodermic needle is not even addressed.

Here is the shopping list of supplies needed to keep a buxom fifty foot woman in check:

Nancy’s family doctor, Doctor Cushing consults specialist Doctor Heinrich von Loeb whose diagnosis is a totally garbled jumbled mess of incomprehensible pronounciations. In other words, I never understood not one word of what the hell he was saying. 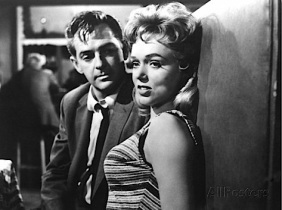 Apparently there’s also only one night club in this one-horse town and Harry and Honey have no shame being seen there together even after Nancy’s public breakdown. What I only just now noticed this one~billionth time seeing the movie is while Harry and Honey are talking, there is a couple dancing behind them that have really cool and smooth moves. Look at ‘em go, 50’s~style next time you watch.

Now that Nancy is Gigantic, the Sheriff and Jess~the Butler can do some retroactive police work and go out to see if they can find the source of those giant footprints by Nancy’s pool house. Jess suggests they call for help but the sheriff nixes that idea, not wanting outside interference. Either the Sheriff is a maroon or something tells me the budget couldn’t stand for more actors. The spaceship is out on the middle of nowhere, in day~for~night shots, hovering like a giant pearl in the middle of the field with its doors wide open. So of course The Sheriff and the Butler walk inside the steamy spaceship. They fear no extra~terrestrial microbes here in the desert air. Listen, my curiosity is as strong as the next Earthling…but I’m not walking willy nilly into a sauna~like spaceship even if the door is open. ( Stranger Danger ).

I guess the morphine wears off and Nancy wakes up. She is none too happy!!!  [ “Do these reams and reams of bed sheets make me look fat?” That astounding growth thing. ] These two hick doctors thought they could handle this fifty-foot giant by themselves and are only just now calling for outside help. Hippocratic, schmippocratic, you need help, you quacks! 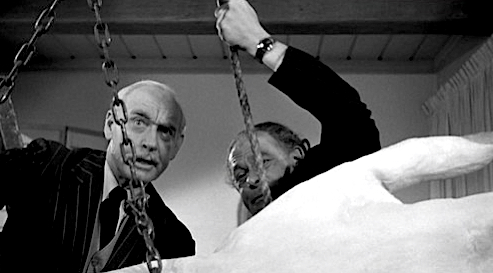 I love that we don’t see a full shot of Nancy except through reaction shots by these horribly valiant actors. Or is that valiantly horrible actors? In any event, I’m dying to SEE Nancy.

When Nancy breaks through the roof all slo-mo and everything, she looks quite majestic
( and transparent ) to me…and she has turned into a blonde. Scientifically speaking folks, did the pituitary malfunction change her hair color as well as her shoe size? Revlon might look into this.

DOCTOR: “She’ll tear up the whole town until she finds Harry.”
DEPUTY DOPEY: “Yeah, and then she’ll tear up Harry.”

There’s something sexy and powerful about watching Nancy stride through the country side and tearing off the roof of the club to find Harry. She kills Honey easily because instead of running for her life, Honey hides under a table in the club and screams her head off into the camera, crushed by falling debris. And now…for Harry.

The Dopey Deputy is not willing to shoot a woman, but Harry sure is. Nancy’s gigantic papier~maché hand reaches through the hole in the roof and wraps itself around him as she picks him up out of the club. When she holds him up in the air in that bedsheet bikini of hers…she’s awe-inspiring. It’s a low-budget film, so I won’t quibble about the thread count of those sheets. Suffice it to say it’s a very empowering moment for all those wives who’ve been done wrong.

Giants are none too bright as they walk near power lines with their giant steps. You’d think they’d avoid them. The sheriff gets one good lucky shot off and hits the power line which  brings Nancy down. She is still holding her crumpled up doll of a husband in her giant man-size hands. [ Shades of Ellen Berent? “I’ll never let you go. Never. Never. Never”?? ] It’s only fitting the doctor, who has known Nancy since she was a little girl, have the last line in this classic:

“She finally got Harry all to herself.”

Directed by Nathan Hertz, the film is nothing like the movie poster at the top of my review. Nancy is not some giant behemoth attacking the world. She is not a menace to society or a danger to rush~hour traffic. She is a menace to herself. She is single~minded in her path of destroying herself. She wants her husband back. I could say the film is a parable about unloved housewives of the fifties and their outsized love to hold on to their men; or women being silenced by the patriarchal power structure; or a film where Men’s worst fears are realized: a woman who is too big for him. But why spoil it with psychobabble. “Attack of the 50 Foot Woman” is just a plain fun. But it’s not a movie I laugh at. Oh no. I feel terribly terribly sorry for poor mixed up Nancy Archer.

P.S. And even though I missed entering my submission here in the: KEEP WATCHING THE SKIES Blogathon doesn’t mean you have to miss reading any of the entries. Check ’em out.