I have to tell you – I’ve been lucky. I’ve been blessed. As a bonafide, die-hard, gushing classic film fan, I’ve been given some once-in-a-lifetime opportunities by Turner Classic Movies that have been over-whelming! And this is one of them: going on the inaugural run of the New York City TCM BUS TOUR. Click on photo to enlarge it.

Now don’t ask me how or why I was selected. ( I’m going to look a gift horse in the mouth? HA! ) I don’t. But I’m grateful. And then to be remembered by Tom Brown AND Robert Osborne; c’mon. I can’t even… Thank you Will and Aurora for the shots of Robert and I. And by the way folks, I also got the chance to meet Jane Powell.

She literally said to me: “I love your hair.” Okay that’s it folks, I’m done. Check please.

There were things going on inside and outside the bus. I’m there with Tom Brown and Robert Osborne…and I see Citizen Screen holding court ( w/Jane Powell. )

I enjoyed the tour –  another enterprising project by TCM to connect fans with classic films. A lot of info I knew, but many I didn’t. I hadn’t realize just how many New York City locations lent itself to the magic of Hollywood. Here is a mere fraction of what I saw that wonderful summer’s day.

The bus went around Columbus Circle and 59th Street – “It Should Happen to You” was filmed here where Judy Holliday hangs her big billboard. 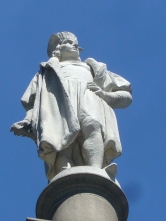 In the same area, this subway and newspaper stand is in a scene in “On The Town“ when the sailors come out of that ‘hole in the ground.’

The bus drove down Central Park West where we passed churches and the Museum of Natural History which has appeared in films. We stopped at the famed Dakota where many celebrities live including and up until recently, Lauren Bacall. Then the bus cut across Central Park, location for countless films. There’s nothing like Central Park in the summertime.

Leaving Central Park the bus goes down one of NYC’s busiest thoroughfares, FIFTH AVE-NUE. We pass The Plaza Hotel, Tiffany’s and Atlas: 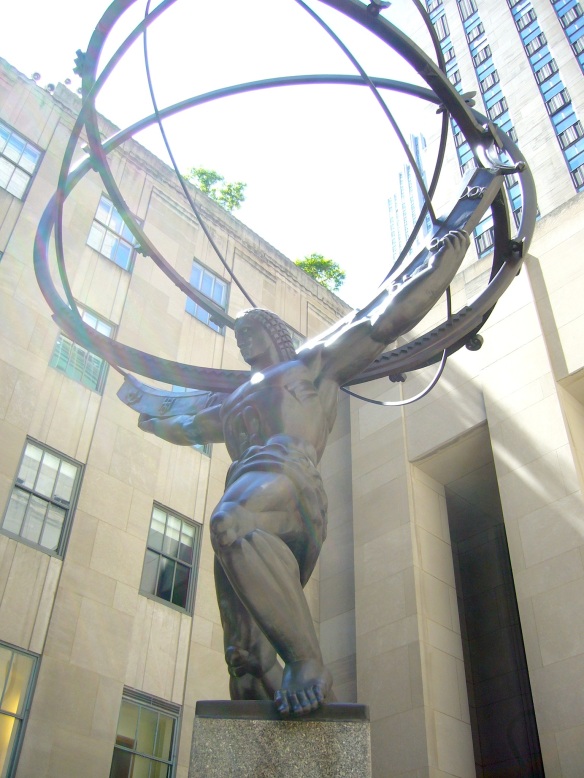 Before Gregory Peck goes for his interview in “Gentleman’s Agreement“ he shows ‘son’ Dean Stockwell the statue of the mighty Atlas.

We went all the way East side of Manhat-tan to the very quiet, very tony, very ritzy Sutton Place. Sssssshhh!! As a classic film fan, you should recognize the 59th Street Bridge. If you’ve seen “Sorry, Wrong Number” the bridge is outside Stanwyck’s apartment window. Or see it in another movie’s iconic shot. ( Click photo. ) We ended at Grand Central Terminal where all roads meet. The TCM NYC Bus Tour covered more locations than I’ve listed here. Maybe it’ll prompt you to take the tour next time you’re in New York City. Or spend a nice relaxing time if you already live here in New York. It was a lotta fun. 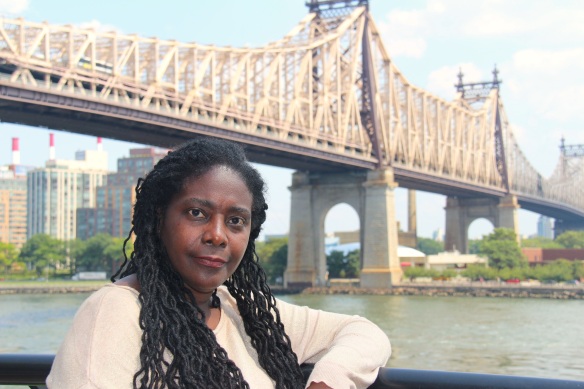 ( Photo by Will McKinley )