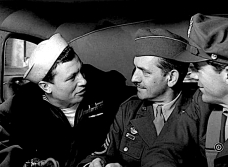 A military plane carrying three servicemen home after the end of World War II flies over the high school and tree-lined streets of Boone City. We’ve already been introduced to them at the airfield and on the plane. We learn what they did in the war, who they are coming home to and how they feel about it. “Nervous out of the service,” says Dana Andrews as Fred Derry, former bombardier. I know you all have seen it more than once, but I’ll refresh your memory as to the other two returning warriors: infantryman Al Stephenson (Frederic March) and Navy mechanic Homer Parrish (Harold Russell).

“It’ll be alright, sailor,” Fred comforts a trepidatious
Homer. “You wait and see.”

Do they know what are they coming home to? Will what they look forward to come true? 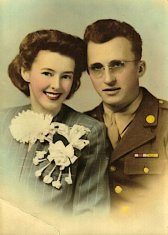 Watching “THE BEST YEARS OF OUR LIVES” (1946, directed by William Wyler) again for this blogathon, I realized I really could watch it over and over again without becoming bored or losing my amazement. The acting, the direction, the music (Hugo Friedhofer), the precise black and white deep focus cinematography (Gregg Toland), and the extremely timely postwar story are all put together masterfully, collecting 8 Oscar wins. My parents were married in December of 1944 in my grandmother’s living room. This movie helps me imagine what life was like then. I can’t get enough of it.

Seeing the problems of the vets reentering civilian life, one wonders if the title should have a question mark after it. Which are the best years? At war, Fred learned he could successfully pinpoint a target from the nose of a bomber, one like the B17 he came back home in. Once home, he’s told he has no skills that translate to a peacetime job. His wife sneers at his lack of success.

Pre-war, Homer had a good throwing arm for high school football. Now he has no hands. Al was the proud head of his family before and now sees his children and wife almost as strangers. Rob, his son, is perplexed at the “Jap” flag and sword Al eagerly gives him as war souvenirs.

Al’s job at the bank seems mundane and restrictive.

After several viewings, I finally got the film’s real heroes: the women. The women are the glue that have held the home front together. They will do so again, now that their men are home casting about for new identities. Each in their own way, the women will make the future the best years.

The women characters are not usually the focus of reviews of this movie. The servicemen have suffered physical and emotional loss and turmoil. Their civilian struggles are real. The women’s parts are so sensitively written and melded into the story as adjuncts to the men, it’s easy to miss their importance to the story.

The first to be dropped off home from the Boone City airport is Homer.  His adoring girl-next-door sweet heart, Wilma Cameron (Cathy O’Donnell) hugs him. Wilma is not emotional with Homer, just seems genuinely glad to see him. She is completely focused on him, taking in his reluctance to engage with her. Later that evening, as the two families gather, we see Wilma in profile as Homer listens to her insensitive father. She is just as discomfited by Homer’s awkwardness as he is.

The scene ends with a close-up of her face, full of loving concern.

Next is Al. His wife, Milly (Myrna Loy), is so happy she can hardly speak to cancel a dinner party that evening. In a close-up, Loy’s joyous face, mussed hair and rising voice perfectly express what she’s feeling. She bemusedly watches and takes care of Al get as he gets smashed in a club crawl. She assures him they’ll be alright for a while if he wants to take some time off before returning to the bank.

For me, the most important character is Peggy, Al’s daughter (the subtly touching and beautiful Teresa Wright). When Al expresses bewilderment at how they’ve survived, she says, “We’re tough, Dad.” She acts as another parent to her younger brother, Rob (Michael Hall).  She works in a hospital. She took over many of the household duties when they lost their maid. She seems to have taken this all in stride. 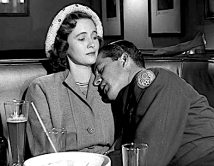 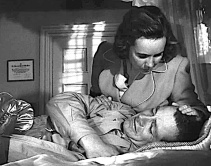 Later that night, after Fred has joined the drunken nightclubbing Al Stephenson (with Peggy and Milly looking on), Fred sleeps it off in their apartment. His sleep is disturbed by flashbacks to a fiery plane crash.

Peggy calmly, deftly comforts him and gets him back to sleep. The next morning, they two are at breakfast, natural as a couple, when Peggy scrambles him eggs. They sit opposite each other at the table talking. She doesn’t mention the nightmares, acting as if nothing has happened. In contrast, Fred’s wife, Marie (Virginia Mayo in a great turn as an eminently unlikeable witch of a spouse) later tells him to snap out of it and he’ll never amount to anything until he does. 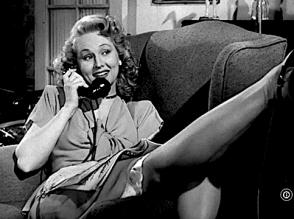 Fred is the last to get home, to his father’s dilapidated old house. The railroad bridge looms over it, and we hear the train whistle – the wrong side of the tracks. His dad (Roman Bohnen as Pat Derry) says his daughter-in-law Marie has left for her own place. She’s leading her own life to the point that she rarely visits. Dad doesn’t even know where she  works, only that it’s a club downtown.

Fred leaves his duffle bag there and goes to search for  Marie. Soon, our three servicemen, who only met the day before, serendipitously meet up in a small bar. They grin, laugh and hail each other like lost brothers. In a contrasting two-shot, Milly and Peggy motionlessly and stonily look on. The next day, after Peggy has cooked him breakfast and driven him home, 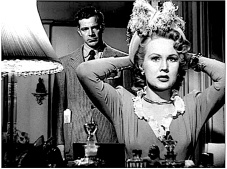 She’s thrilled to see him – and the French perfume he’s brought her. Later, she is quite disappointed to see him in civvies and begs him to wear his uniform when they go out. When Fred runs out of money, she turns, refusing to give up her partying life. Marie will not be Fred’s future, and her angry statement that she’s divorcing him will open that future up to something else.

The women go through a lot for their men, trying to support them and help them forward to a “best years” future. 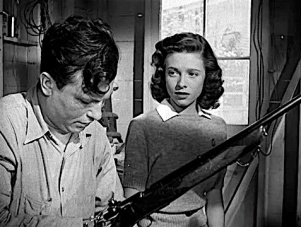 Wilma seeks out Homer in his garage to talk and declare that some things have changed but her love for him hasn’t. He sees his younger sister and her friends staring and he reacts badly. Wilma is in every shot with Homer, looking on with concern but not pity. She comes over the next night as Homer has made himself a snack and a glass of milk. He gives 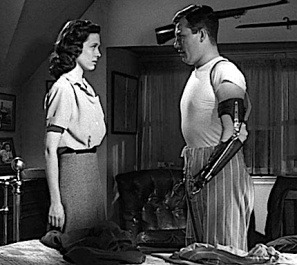 her a demonstration of what his limitations are and what life would be like as his wife. Homer’s face in in deep shadow as he tries to tell her that it would be an awful life for her. She has a wonderful light on most of her face, as she tells him his disability means nothing to her. She faces him in his bedroom and watches as he takes off his robe and the harness that straps on his metal ‘hands’, leaving him all but helpless. She is smiling as she buttons up his pajama top.

Her eyes are always on him as he describes the lifelong help he’ll need. The spot stays on her face as she declares she’ll always love him. In that moment, their ‘best years’ future is set with each other.

Peggy can’t seem to stay away from Fred, even though he’s married. Fred has taken a low-paying job at his pre -war employer, a drugstore. Peggy comes in, and they flirt. The close-ups of Teresa Wright are astonishingly gorgeous, in her innocent floral hat and pearls.

Her fresh young face contrasts with heavily made-up Marie. Fred and Peggy have lunch together. This is where I began to notice that in many shots of the two of them, Peggy has the best lighting and the best angle. As they eat and talk, Peggy is the visually most important thing. The situation turns serious when Fred kisses her in the parking lot. He immediately apologizes and Peggy drives off stone-faced. She later calls Marie to invite her and Fred out for a double-date dinner, to “get him out of her system,” as she says to her parents.

She hopes seeing him with Marie will cure her. Her date tells her that he can see that Fred and Marie just don’t like each other. Peggy confesses to her parents that she’s determined to break up Fred and Marie’s marriage. 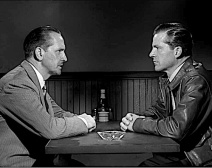 Al and Fred meet.  Al extracts a promise from Fred that he will not see Peggy again. 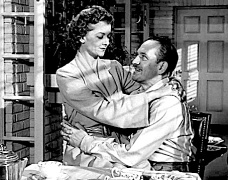 Milly does her best to make Al feel comfortable and safe – things like breakfast in bed and helping tie his tie for a fancy bank testimonial dinner. During the dinner, she keeps track of his drinking and worries when he staggers to the podium to speak. As he begins, the concern on her face is palpable. One quiet cough from her warns him off from being too honest. He catches that hint and because of it, saves himself.

Via Myrna Loy’s perfect acting, we see her face turn from worry to admiration and love, when he declares that, if he has anything to do with it, the bank he loves will support the returning vets. He goes on to state that doing so is patriotic. He’s contravening what his boss has earlier warned him against, risky GI Bill loans. Speech ended, weak applause turns to an ovation when Milly, radiant with pride, gets up to give him a congratulatory kiss. She is giving him his path to his ‘best years.’

Fred discovers that Marie is seeing other men (Steve Cochran). It’s pretty much an instant break-up. Divorce imminent and not regretted by either, Fred decides to leave Boone City. Fred’s dad and his stepmother (actress Gladys George) help him pack.

They discover Fred’s many citations for bravery, which he scorns. After Fred has gone, they read the citations and with emotion, realize Fred’s accomplishments and traumas of the war. Back at the Boone City airport waiting for a lift to go any where, he visits a field full of the decommissioned planes he saw coming home. With dignity and confidence, he gets a job turning old planes into new homes. 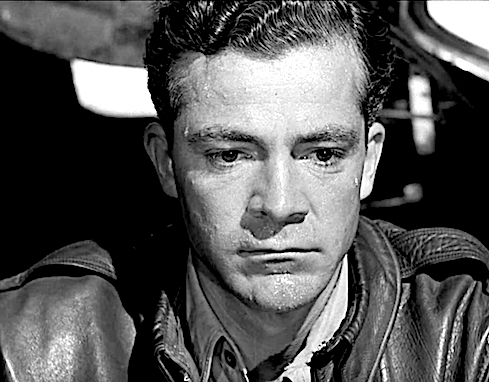 The finale is Homer and Wilma’s wedding. Across the parlor – this is an old-fashioned home parlor wedding – he sees Peggy. Once again, the women are wonderfully lit. Al and Milly, in deep focus beyond the bride and groom as they recite their vows, are the picture of an equal marriage partnership. Fred is there as Homer’s best man. During the vows, Peggy’s face, filled with emotion, is softly illuminated in close up. You can’t take your eyes off her, and neither can Fred.

The final shot of the movie is another close-up of Peggy, adoring Fred.  We are looking over his shoulder, but she is the most important thing on the screen. He tells her how hard their life will be. Clinging to him, she obviously only cares about being with him. They are each other’s way to their ‘best years.’

While this is a long move, 169 minutes, it flows without stopping. The interwoven stories of the three returning veterans are told with grace and sensitivity. I hope I will make other discoveries when I watch it again.

CineMaven’s Note: Thank you Stephanie for sharing your well-written thoughts and for giving this Old Movie Weirdo a new hook…a new way to watch this time-honored film. Enjoyed reading this. Folks, click the banner —> for more entries in today’s blogathon. Thanks for reading!

17 thoughts on “THE BEST FUTURE OF THEIR LIVES”