Well, it’s been six months since the Turner Classic Movies Classic Film Festival with everyone back home and back to their real lives. I’m thankful we were reunited once again by our shared passion for Classic Movies and that friendships we have fostered throughout the year using Social Media help build our bond. I’m thankful for meeting the newbies who’ve come to Hollywood for their first festival and seeing how excited they are to finally be here in Hollywood where the Magic of the Silver Screen lives! We are #ReelFamily and #ReelFriends.

I live here in Los Angeles and have lots of opportunity to experience all that Hollywood has to offer. So when it is Festival time and #MyTribe comes home for the TCMFF, it is so wonderful to share all that L.A. and Hollywood have to offer! I like to join in on the local Hollywood tours that are available during the Festival and year round. It’s a great time to reconnect with seasoned festival-goers and first-timers who want to enjoy Old Hollywood locations and history together.

For me, the TCM Film Festival experience is, first, what movies I am going to see.

First and foremost I love Cary Grant! He and Ingrid Bergman are fabulous in this movie. I had not seen it for a long time; more than four years at least! And I had never seen it on the Big Screen with an audience who could truly appreciate it. I love the witty dialogue between them and how they just so unexpectedly feel in love. You could feel the ease at which they just come together…like they were made for each other. And then her outrage at his pretense! The plan for revenge was so fun to watch play out and share that fun with #MyTribe.

This one was a first time for me for a Cary Grant film. This was one of his earliest film roles and though he had a small part, he always makes an impact. When he first comes into play on screen his back is to the audience, but you know right away who it is when you hear the sound of his voice! There was a cheer from the crowd when we heard him!  He is young in this role and doesn’t quite have the signature suave, graceful, move that we have come to know of him in movies. Sylvia Sydney and Fredric March were the leads in this film and both were really good in their roles. But I was really there for a Cary Grant role I had not seen before.

Now THIS screening was the crown jewel of movie viewing for me at the #TCMFF10!

“The Bachelor and the Bobby Soxer” played opening night of the Festival in the historic Egyptian Theater in Hollywood, with about 600 very happy Classic Movie Fans.  We got to see this Nitrate print on the Big Screen while seated  in the Balcony! It was GLORIOUS! This has always been one of my favorite movies with Cary Grant and Myrna Loy. They play off each other so well and move with such ease in their scenes. Shirley Temple also stars in this movie and I just love her part in this comedy. Plus she added the word “sklonklish” to my vocabulary! 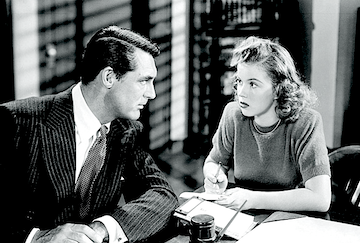 My favorite Festival moments are always the WHOLE THING!!!  But this year was extra SPECIAL because I had the opportunity to attend the Jennifer Grant interview and she is just as lovely as I hoped she would be! She is Cary Grant’s Child! She was gracious and very understanding of we obsessed fans of her father’s.

I was able to get a selfie with her and she introduced me to her son Cary Grant!!! And was he a little charmer. I know I was hoping against all hope he would have a cleft in his chin! It was just so lovely that she shared some of her memories of her father with Us…just made me even more of a fan, if that is possible. On Sunday “Merrily We Go To Hell” was as a TBA at the Legion Theater and Jennifer Grant came back to the Festival and did the intro to the movie for us. And I got a wave from little Cary Grant! 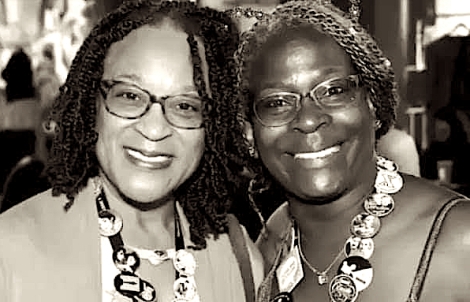 The TCM Festival experience is meaningful to me in terms of the time I get to spend with #MyTribe that are visiting from far and wide. It’s the built up anticipation of waiting 365 days until we meet again. It’s like Montgomery Clift’s  character, Prew, in “From Here to Eternity”:

“I’ve been counting on this like a kid counts on Christmas.”

That is what it is like for Us, crammed into four ~ five days.

One of the other things I do is take time to visit with people and get pictures! I love the Selfie!!! Pictures are a great way to be able to look back and relive every moment! Plus, with Social Media we can share our pictures with each other which also helps strengthen the bonds of #ReelFamily and friendship throughout the year. Photos also helps get me through feelings of sadness and withdrawal when it is all over in a blink of sleep-deprived eyes and salty buttery popcorn fingers.

So join me on the “Going to the TCM Classic Film Festival” Facebook Page or follow me on the Twitter (Girl@theBeach @Cary_Grant_girl) to see how much fun we Classic Movie Junkies have when we get together!!!

See you in Hollywood #TCMFF2020