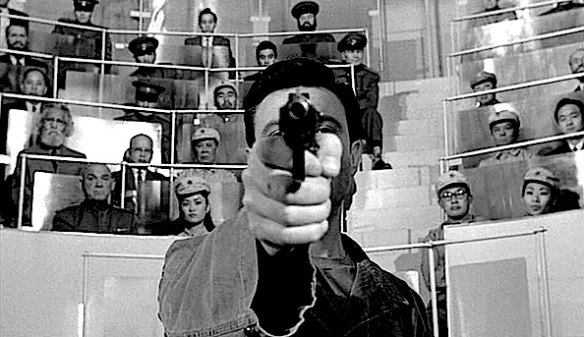 The magic of cinema has never been lost on me. When VHS was introduced to our household, that opened Pandora’s box for me. One of the treasures I found in that mysterious box was the 1962 John Frankenheimer classic “THE MANCHURIAN CANDIDATE.”

But, I didn’t find this treasure on my own. My beloved father, Walter Wilson, a technical writer for Bell Laboratories in the late 70’s, early 80’s, actually led me to this “gem” of a film that would open a new doorway to politics, imagination and fantasy for me. I could sit here for days and extract every single nuance that enchanted me about “The Manchurian Candidate” and it still wouldn’t do complete justice to the profundity this film offers to the 21st century.

The film is a political suspense thriller about mind-control and I must admit I, too, was transfixed and beautifully manipulated by the script and flawless casting of Frank Sinatra, Laurence Harvey, Janet Leigh,  Angela Lansbury, Henry Silva, and James Gregory:

Frankenheimer’s ability to transpose fantasy onto reality “blew my mind”– literally. It was clever, hip and ever so twisty. 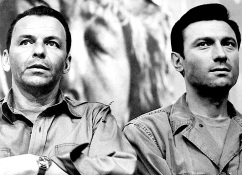 Take for instance the Manchurian operatives using mind-control to convince captured U.S. soldiers that they were looking at a congre-gation of white women addressing them about botany. Then…Frankenheimer morphs the scene to show Black women in an auxiliary club at a garden club. Interesting choice. In actuality it was mind-control that superim-posed the faces of women onto the actual male Manchurian operatives. All I knew was that the scene was trippy and delightful – saturated in layers. I just remember looking at my Dad, then looking at the screen as if to say “Did you see that?” I couldn’t pull my mind from that scene and was fixated to the end. It was that scene that began my mind-altering ride.

The cast is impeccable. I’d like to acknow-ledge the honesty of the main character Bennett Marco, played by Frank Sinatra. Mr. Sinatra was  a courageous man for taking on this film and to his credit, played his character with human pathos and humility. This character was by no means pretty. He was a mentally deprived man, by default, yet his intelligence allowed him to actually de-program himself to not only solve a murder, but also peel back the layers of a diabolical mind-altering plot. He was a hero; very much like whistle blowers today. I believed and empathized with this character.  Yes, Sinatra’s portrayal of Marco was stunningly progres-sive. Hats off to you Frankie.

Janet Leigh, the love interest. A tasty counterpart to Sinatra’s character. I believe she was the handler trying to bring him back to a state of normalcy – an instrumental source in the deprogramming of Ben Marco.

l love Angela Lansbury, the controlling mother. I think – Lady Macbeth. I think, the Devil Incarnate. Just who WAS this woman? Perhaps the Queen

of Hearts. I would pay to read her backstory, wouldn’t you? There is nothing so horrible as to use a mother’s love to create an assassin! What or who created this monster? It would probably make an excellent film in itself: “Eleanor Shaw & the Oedipus Rex File.”  Heck, I’d watch it.  Angela Lansbury’s cunning and deviant character Eleanor Shaw, was a stroke of genius. Lansbury masterfully embodied the demented character’s drive for power, but also showed the vulnerability of a maniacal maternal instinct.

She does kiss her son. However, the question stands: was it a “motherly” kiss or a lustful one. Somewhere in that backstory lies a woman scorned, avenging the taking of her son’s mind as any committed mother would. Eleanor, however, was commit-ted to another world that had her full allegiance – Central Intelli-gence, to which she sacrificed her only son. Very few actors can embody both emotional realms simultaneously. Angela does it brilliantly.

“Poor, Raymond. Poor, poor, Raymond.” A stoic, tragic figure. It seems as though tragedy would fol-low this amazing actor, Laurence Harvey, to his death in 1973. I found his character painful to watch. His sadness and anger was staggering. Knowing that his mind was manipulated as a child left no out for him. He was the struggling ultimate victim – a casualty of war. I found that throughout the film, in his way, his morbid nature was an indi-cation of depression and resignation to his fate. Once he realized his fate was sealed, he self-detonated, destroying all evidence of a hand poorly dealt.

I’m sure there are books written on the psychology of “The Manchurian Candidate.” If not, there should be. This film is foretelling, foreboding and only the beginning of things to come. I highly recommend people revisit this classic to get some answers to the questions embedded in the political and social climate of the 21st century.