I revisited “Fort Apache” (1948), one of the most entertaining Westerns made during the Classic Era, by master John Ford. It is not my favorite Western (my top one Western is John Ford’s 1956 film “The Searchers”  ), but is arguably one of the most complete, combining entertainment values, rousing scenes, a great gallery of characters and actors, beautiful scenery on location and cinematography, poetry, the tackling of timeless issues, etc. A true gem. A popular film, liked by audiences and critics alike. 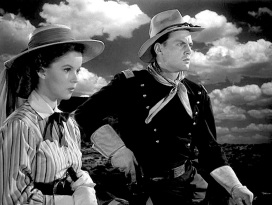 And what a cast! John Wayne, Henry Fonda, Shirley Temple, John Agar, Anna Lee, Victor McLaglen, George O’Brien, Pedro Armendáriz, Ward Bond, Mary Gordon, Irene Rich, Mae Marsh, Movita Castañeda, Grant Withers, Dick Foran, Guy Kibbee, Miguel Inclán, each one giving an unforgettable performance in this great ensemble piece under the guidance of the American Master. You can’t get better than this. Endearing, funny, moving, rousing,….I could go on and on, about it….talking about how much I disliked Fonda’s being full of himself, egocentric character; or how much I liked Ward Bond playing the proud father of an officer….with Irene Rich as his sweet & understanding wife; Anna Lee’s beautiful nuanced performance as O’Brien’s wife; John Wayne at the peak of his powers and of his charisma; OUR HERO, etc, etc….

The Blu Ray release includes a wonderful print. A true must-see. I fell in love with this film, in spite of the many times I had seen it before, I had never really valued its actual worth.