I’ve had this film on DVD (a fair print shared by a very good friend) for years, but I had not seen it -although I knew it was a fantastic flick- but, in a way it was good not having watched it until now, because I was able to watch the recently released Blu Ray release, which includes a fantastic print.

In my opinion, director John Farrow directed his best films, around this period of time, including “The Night Has a Thousand Eyes” and “The Big Clock”, the latter also starring Ray Milland, but this might well be the best of them all!

Ray Milland plays a villainous role (the devil, no less) and he is very good in it. He’s an actor that has been growing on me with each film of his I have had the luck of watching. He was not only good in romantic films or comedies, but also in dramas and sci-fi flicks. “The Uninvited”, “Till We Meet Again”, “Skylark”, “The Gilded Lily”, “The Crystal Ball”, “Ministry of Fear”, “A Life Of Her Own”, “The Man with the X Ray Eyes”, “Easy Living” and “So Evil My  Love”, in which he also plays a sinister role, are some of the films that are living testimonies of his great talent and range as a performer.

Audrey Totter as a fallen woman gives truly one of her best performances and Thomas Mitchell as an honest DA is also superb, giving a nuanced and believable performance. He should have won an Academy Award nomination for this role. I won’t tell anything about this fantasy-drama’s plot, because it is indeed a film that one should better watch without knowing anything about it. It should take you by surprise! 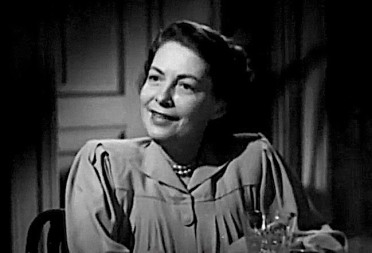 Mention apart deserves in my opinion, Geraldine Wall as Mitchell’s character’s understanding and altogether marvelous wife. Her performance is one of the most sincere I have ever seen in a film of this Era. She glows with truth as the loving and wise wife. I loved her.

And George Macready, whom I will always identify as Rita Hayworth’s sinister husband in “Gilda” (1946) plays a completely different role (a reverend) with great depth.

A very good film and a huge discovery.

CineMaven’s Note: I will always stop dead in my tracks for Geraldine Wall. ( See her in a bit part as the veterinarian in “Please Don’t Eat the Daisies” or as Van Johnson’s Mother in “High Barbaree” and in….oh, tons of things. )