I know it had to. And it has. I’m not quite understanding how sunshine will happen without day. Doris Day passed away Monday, May 13th at the age of 97.

I needed a few days to process this news and I’m still shaking my head. You might think this crazy but 90’s is not so very old, for classic film fans. Social Media blew up like a volcano with this devastating news. It was sad but wonderful to read the great outpouring of love and admiration for a woman who was top box office for a decade, had a great career as a singer, was a big animal activist and seemed to be regarded by all as a genuinely nice person.

When I’m feeling sad or bummed out, I can throw on a Doris Day movie or think about one of her films and it’ll perk me up. I had to take an MRI about a year and a half ago, and going into that machine proved more irrationally daunting than I expected. The technicians hooked up my iPhone in to their room’s headphones, which I could wear to drown out the noise of the machine. The movie I had on was “My Dream Is Yours.” It helped calm me. She pulled me through what I couldn’t get through myself. Doris Day was so pretty, had a great smile, a cute little figure, a great sense of style…and an infectious laugh. Simply put, she makes my heart smile. 0kay okay…if you want me to get technical about it, she was quite the talent. So versatile. I found her believable in the movies. Those who chalk her up to the “virginal girl-next-door” are most certainly and lazily missing the point of her screen persona. At her core, she was a good decent person you rooted for. On top of that, she could do anything: comedy, musicals, drama, she could dance and sing. See…versatility squared. And boy could she sing. ( My Dad says so! )

She could switch up styles with ease. You want her peppy, raucous, lush & romantic or swoony…or jazzy? Yeh, she could swing jazz too. One of her idols was the great Ella Fitzgerald. What’s your pleasure? She had the chops to do it all. To talk of Doris Day’s music career would need a post unto itself.  While today’s singers flit up and down the scales like jack-rabbitting acrobats, Doris’ voice is warm and controlled. Oh no doubt she could be raucous ( see “Calamity Jane” ). And she could belt it out and ramp it up with the best of ’em. But when she gives with a soft romantic song her voice is like a caress; it’s a whisper brushing against your ear…your heart. Her voice was transparent like clear clean spring water;  not a lot of embellishments. But she also had the lush consistency of maple. No, I don’t mean saccharine. I mean full, rich…it coats you. I don’t sense pain in her voice ( though she’s had her share of it in her life ). No, I’d say there is longing, poignancy; a confession only to you.

With her acting career, how lucky was she to have worked with all sorts of top Hollywood leading men, and compliment their style. Maybe make them even better. She fit so well with Gable, Grant, Stewart, Hudson, Douglas, Garner, Niven and Cagney  just to name a few. And again, she could wear different persona and be believable in any one of them: sassy, rowdy, warm, sensuous, playful, terrorized, professional, maternal, a Woman. And if you think it’s only Audrey Hepburn or Kay Francis who have a sense of style, then check out GlamAmor’s blog chronicling Day’s outfits in “Pillow Talk”,  “Please Don’t Eat the Daisies” and “That Touch of Mink.”

I’ve been lucky enough ( or old enough?! ) to have seen some Doris Day films when they were originally released. My earliest memory of her is my family going to the Bronx’s Whitestone Drive~In in 1964 to see Doris Day and Rock Hudson in “Send Me No Flowers” which is imprinted on my cinematic DNA. When she does comedy, it’s impossible to leave her films without a smile on your face. She’s wholly under~rated as an actress. Now, I’m not quite sold on the idea she could have played Mrs. Robinson in “The Graduate” and be that type of cougar. But here are my choices of five bite~sized descriptions of my favorite films of Day’s showing different sides of this talented woman. What’s not to like?

I prefer this Doris to her very first film ( “Romance on the High Seas” ) because she’s a bit toned down and sweeter in this one. But no doubt she did make a vivacious splash in that film. “My Dream…” is sort of a meta-version of Day’s own story. A young woman alone trying to support a child and herself on her own while breaking into the show business. ( Big bands ). She’s so engaging in this; warm, hopeful, disappointed and in love with the wrong man. With a normal wardrobe ( and not the over-the-top concoctions of ‘Romance…’ ) you can really see she’s just like you and me. I love this film. It’s the first of her movies where she plays a mom. Right off the bat the studio is not afraid to portray her as a Mother, and her scenes with her movie son are adorable. She works well with hail fellow well met Jack Carson. Her next movie: “It’s a Great Feeling.”

In the same vein ~ singin’ & dancin’: “Romance on the High Seas” “Tea For Two” “It’s A Great Feeling” “Lullaby of Broadway” “The Pajama Game“

We all know movie biographies’ accuracy are suspect. And I doubt the real Calamity Jane sang or did any of the things Day does in this movie besides shoot off her gun. But that don’t hardly matter, pardner. Just sit back and let her loose. Day owns the screen with this film, running and jumping and whooping and hollering it up. She totally never breaks character. The film she did before this was “By the Light of the Silvery Moon.” As Clam, she boasts she can bring a fancy dance hall girl to town, which only causes Day’s character to become painfully aware of her lack of femininity by contrast. But with all her loudness and competitiveness, she’s really a girl in love. She just has to realize the right man she’s in love with. She does a great job in this one and is supported by that attractive, big ol’ 6’4″ baritone Howard Keel. In this film, Day is part tomboy / part lady / all talent. Her energy is off the chart. She should have been nominated for an Academy Award for this performance. Her next movie: “Lucky Me.” 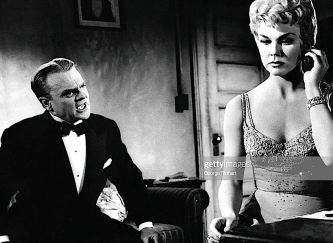 Here’s the test, straight drama… standing toe-to-toe opposite one of the screen’s already legendary tough guys: James Cagney. Could YOU do it? Doris does…and passes with flying colors. Hollywood goes the bio route again, this time with 20’s songstress Ruth Etting. Day plays a tough slightly calculating cookie to get the breaks she needs in this sea of men; she walks the line this side of pretty much flat out using petty gangster Cagney, to get the career she wants. Day is serious in this film, nothing playful or cutesie about her. She’s got a killer figure and shows it off in her skillfully done dance numbers. I don’t know Etting’s voice, but I’ll wager Day sounds nothing like the famed singer of a generation before. Day has her own style. See—> “Ten Cents A Dance.” Her singing that song is my favorite moment in the movie. She clasps her hands in hopeful prayer when she sings the line: “Sometimes I think, I’ve found my hero…”. But it’s mostly her rigid stance, steeling herself against the men who only need a ticket to dance with her, planting her feet firmly on the stage that rivets me. With hands on her hips and slightly swaying her fringed dress, hearing her say: “Come on big boy…” is worth the price of admission. Her next movie:  “The Man Who Knew Too Much“

I think this is the “official” ushering in of the sexy romantic comedy. Doris Day and Rock Hudson are absolutely perfect in this comedy on the cusp of the sexual revolution. Smartly written, the premise has an interior decorator ( Day ) and a womanizing songwriter ( Hudson ) share a telephone party line. Hudson pretends to be someone else in order to wine, dine and trick her into romance. Shenanigans ensue. These two were on their own very different career paths when they were teamed here, and this is a match made in heaven. I think “virginal” is a misnomer. She’s a successful career woman with standards. She’s got a fierce wardrobe ( GlamAmor: “Pillow Talk” ). See her fabulous apartment? Doesn’t look like she’s a hermit. She’s sexy as hell. Day and Hudson are just perfect together: timing, good looks, chemistry. They tried the formula two more times, having Tony Randall round off the threesome’s trilogy. This is a wonderful film. In fact, I’ll be watching it with three friends this Friday and it’ll be a good time!! Her next movie: “Please Don’t Eat the Daisies.”

In the same vein: “That Touch of Mink” “The Glass Bottom Boat” “Lover Come Back” “Teacher’s Pet“

Doris has her hands full with four sons, a giant dog, a new dilapidated house in the country and a husband who’s trying to navigate the world as a Broadway theatre critic. From the beginning of her career, Doris has off and on played a Mom. Well here she sure has her hands full and it’s totally natural and believable. She’s no coddler, she shoves ‘em around, talks to them on their level. I like seeing her with sons. Now dealing with her husband is a different matter. She’s got the Continental sophisticated David Niven as a husband ~ not bad, girlfirend ~ He’s somewhat Americanized. They love each other and are loving to each other ( uhhhh, four sons, hulloohhh! ) but are having just a bit of a rough patch. Doris is worried about her marriage and her husband getting too big for his britches in the theatre world. It’s a comedy, with a tinge of drama to it. You know on paper, I wouldn’t have put Niven and Day together. L0L! Shows ya what I know. They fit each other nicely. I enjoy seeing Doris maneuver between three rough and tough boys, one precocious toddler…and still be a loving partner to Niven. Her next movie: “Midnight Lace.”

In the same vein ~ Married but comfortably sexy: “The Thrill of It All” “Move Over Darling” “Send Me No Flowers“

There’s a small hole in my heart. I loved Doris Day. She is the one movie star who singularly makes me happy. RIP.