It’s so hard for me sometimes to explain exactly why I love these ‘old’ movies as I do. I have such a visceral and emotional response to these shimmering ( or murky ) B&W films whether they be “A” pictures or “B” that it’s hard to explain intellectually. Maybe words aren’t needed among us. 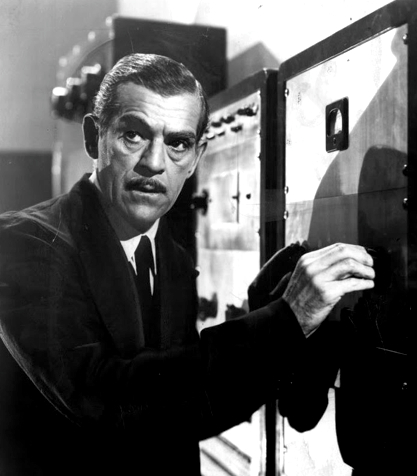 I love “THE DEVIL COMMANDS.” I love the low-budgetness of its production though well-done. It has a succinctly executed plot thanx to Edward Dymytryk. Once again, BORIS KARLOFF owns the movie he stars in. I find him compelling to watch: the sonorous resonance of his voice, its soft accent, his dark handsome looks. I can picture him with a white dinner jacket against his swarthy complexion dancing at the Mocambo, though I am romanticizing him. He probably was a stay-at-home-bookworm. Also he’s just a darned good actor. I think becuz he mostly starred in the horror genre, he might be over-looked and under-rated as an actor; Karloff has the pathos of Frankenstein’s monster, a kindly scientist and a terrifying, sadistic grave~robber. He can be soft or crazed. Hell…he’s every bit as good as Spencer Tracy.

His pathos as the grieving Dr. Julian Blair in “The Devil Commands” touches my heart. He’s rather the avuncular absent-minded professor in the beginning of this movie. We see his comfortably happy marriage to wife Helen played by Shirley Warde. She’d have certainly done Moms like Henry Aldrich’s and Andrew Hardy’s proud. She made an impression with me…very sweet. She helps him with his experiments and playfully chides him for working so hard. During Karloff’s demonstration before fellow scientists, I just loved the way he quietly asks his wife if her hair is wet when he’s about to strap her to one of his experiments. He was so soft, quiet and tender with her.

This is the hypothesis he intends to prove: 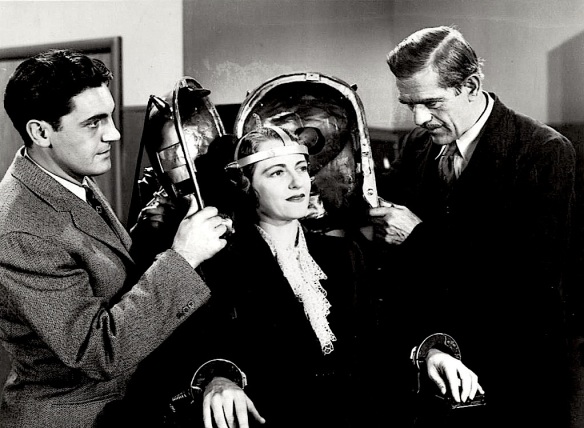 “You will be the first people…to see the proof that the human brain gives off an impulse that can be recorded.”

But you know what else we see…we see a man spiraling down…down…down; a man turning his scientific experiments for the good of mankind…into using Science as a coping mechanism for his grief, as his wife has been killed by an out of control car.

With what, at first, could be a scientific possibility, has now gone awry as Karloff discovers that he has heard his dead wife’s voice:

“Well now I know there is a way for the dead to talk to the living.”

Skepticism hits Karloff between the eyes when his fellow scientists begin to scoff and question his sanity:

KARLOFF: “Well I believe that the human brain, the brain that invented radio, is itself the most perfect sending and receiving medium on earth.”

SCIENTIST #1: “But what if you do find a way to pierce the veil between us and them.”
SCIENTIST #2: “And let the world of the dead back in upon the living?”

SCIENTIST #1: “We don’t know what evil may be lurking behind that veil waiting to get through.”

SCIENTIST #2: “What if you let loose on humanity something much more terrible than any fear that haunts us now?” 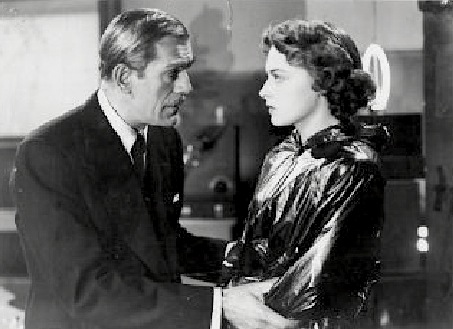 Karloff’s goose is cooked and his daughter ( played by Amanda Duff though I longed to see Anne Gwynne in this) and science assistant ( played by * Richard Fiske ) witness his discretization. 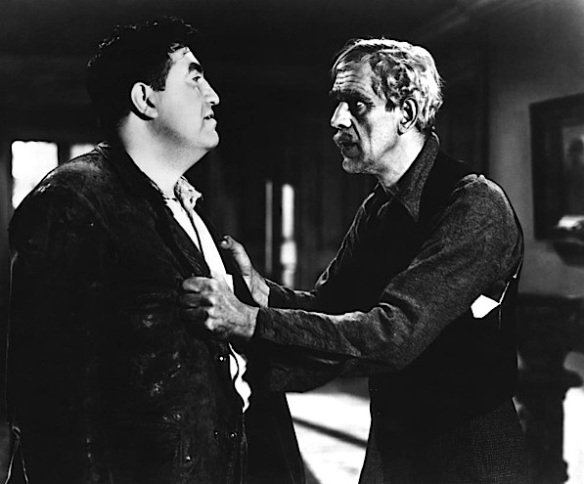 Faithful man-servant Karl ( played by Ralph Penney ) suggests Karloff visit the medium he uses to talk to his dead mom. ( Wha’? ) Now it’s Karloff’s turn to play skeptic but he humors poor dumb Karl. Karloff meets up with Mrs. Walters, played by the great Anne Revere. Now I might be alone in this, but I find Revere majestic in every role she plays; Mom or Mean. Even as the mother of Elizabeth Taylor, Gregory Peck or Monty Clift, I find her sternly beautiful with a Puritan/MidWestern look and a grand speaking voice. I could listen to her all day. I think Revere would have made a good Mrs. Danvers…or Lady MacBeth. As the Medium, she is debunked by Karloff but he does experience an electrical sensation from her that is the only real part of her act. Could this be love? Hardly.

“This is science Mrs. Walters. There’s nothing of the occult about it!”

Karloff has shunted his daughter aside and adopts Revere as confidante/co-conspirator in his scientific exploits. He uses her for her energy, but Karloff’s motives though pure are wacky. Revere has different ideas in mind; and they have a purely financial bent. Please note the look on her face as Karloff talks of his plan to communicate with the dead. I don’t think I exaggerate that she has a look that is exalted, rapturous and down right ecstacy-filled. But her voice is cold…cold…cold when she says ( in her perfect enunciation ): 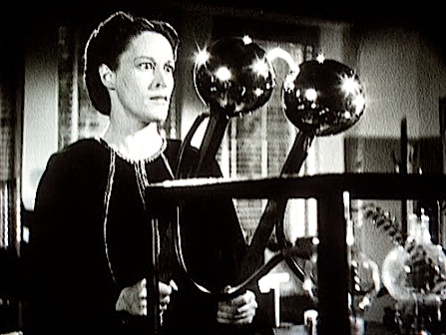 “If you can do what you’re trying to do, you’ll own the world. You know that don’t you?”

Whew! Her face was intense, her eyes unblinking. I’m telling you, I watched her.

Revere is driving the bus now, taking the reins of the household. And I did think of Lady MacBeth with her control over Karloff, moving him out of town, making things easy for him to just concentrate on completing his experiments…bringing her that much closer to riches she believes await. She doesn’t allow Karloff to get medical care for Karl…now a shell-shocked victim of Karloff’s single-minded determination and experimentation. Revere pulls poor Karloff away from all he knows. When we see him two years later, his hair is unkempt and unruly. He looks disheveled. Bodies are now missing from the town.

His housekeeper Mrs. Marcy is played by the ubiquitous Dorothy Adams. Oh you’d know her if you saw  “LAURA.”  She is prompted by the town’s sheriff to investigate what’s going on in Karloff’s laboratory. ( The whole town’s talkin’. ) It will be the last thing she ever does. That whole scene with her in the lab was great; the music, her fear. Why’d she go inside that room. What the heck is under that tarp? 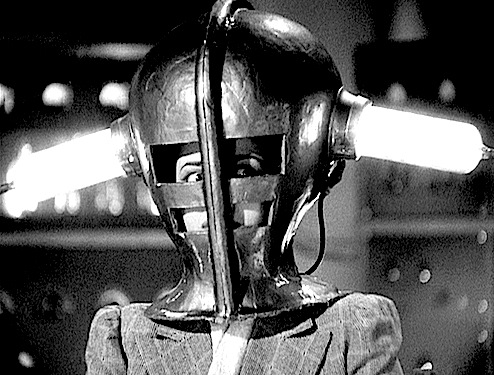 Poor Karloff…his single-mindedness endangers his own daughter and puts him back in Frankenstein monster mode where townspeople with torches are after him. What an eerie sight in his laboratory,  to see the bodies of the missing dead trussed up in Diver Dan helmets…the noisy whirlwind of energy centrifically forcing the bodies to lean forward. Revere is eventually and justly hoisted on her own petard, and so is Karloff as it all comes crashing down around their ears.

“The Walking Dead” “The Raven” “The Mummy” “The Black Cat” and “Black Friday” are among my favorite Karloff films. And you can read my guest blogger at Fernando’s Corner talk about:  “Isle of the Dead.”

Journeys In Classic Film is hosting the blogathon of TCM’s SUMMER UNDER THE STARS. ‘SUTS’ is TCM’s annual event where each day they celebrate a different movie star by showing a day of their films. Please click the banner above to see the other entries in this great event hosted by Kristen Lopez. There’s a smorgasbord of films to fill the end to summer.