Even though my formative years of education ( K – 12 ) ended in 1970 ( yes, I am a Hunter College graduate ), it is indelibly etched in my DNA what the Fall…what September means. It does NOT mean autumnal colors or the mellower temperatures. Nor does it mean Mother Nature preparing herself for her Winter slumber. No, Fall to me means the misery of going back-to-school. Homework. Teachers! Baaaah!!! ( Of course, I’m speaking as a fifth-grader now ).

With the ‘SEE YOU IN THE FALL BLOGATHON’ hosted by Steve of Movie Movie Blog Blog, Fall now has a new meaning for me. You want pratfalls, sight gags, scatological jokes and UN-politically correct humor which ribs ethnicities, sexual persuasions, mental health and movie genres? Well you’ve come to the right place: The World of Mel Brooks.

“BLAZING SADDLES” is one of the funniest movies ever made. All throughout Mel Brooks’ riotous “B.S.” (that’s “Blazing Saddles” to you) there are many laughable moments:

…and much much more. But I gotta tell ya, when Brooks breaks that fourth wall in the last ten minutes of this movie, all bets are off. All hell breaks loose. With this western comedy, the wheels fly off the stagecoach, the stagecoach goes off the tracks and careens over a cliff; and during its descent into Death Valley and chaos, you don’t jump ship, but you ride that bucking bronc like Slim Pickens in “Dr. Strangelove…” Click photos for some brief excerpts: 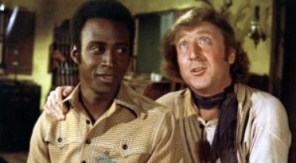 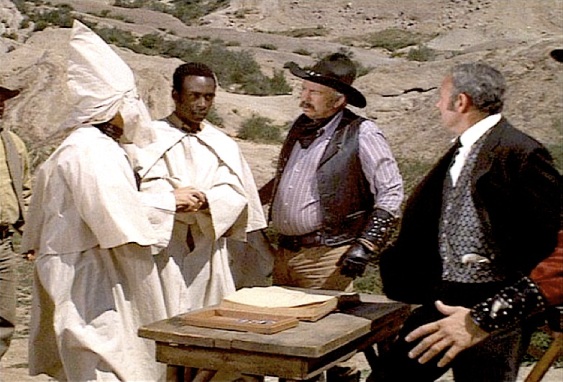 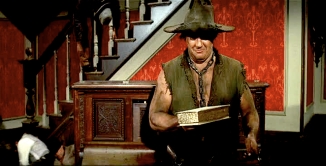 In keeping within the rules of this blogathon, my look, specifically, is of the last ten minutes of “Blazing Saddles.” It’s these last ten minutes of the movie that are akin to the anarchy of the Marx Bros.’ “Duck Soup” and it packs a wallop. Let me try to break it down for you ( but DO seek out the DVD!!! ) Be fore-warned here. My post will contain salty language befitting the tenor of this movie ( but not nearly as salty as I am in REAL life ) so if you’re easily offended, I’ll beg your apologies beforehand or you can just move along folks. Move along. Nothing to see here but some wild-ass humor:

When Taggart ( Slim Pickens ) – the bad guy, and the rest of his dastardly bad-ass henchmen descend on Rock Ridge they find out it’s a fake town. Good guy, Sheriff Bart ( Cleavon Little ) and the good citizens descend on them no-good varmints to whoop some bad guys’ ass. A free-for-all ensues and we’re off to the races where horses are tipped over, Lili Von Shtupp ( Madeleine Kahn ) and her Germans are singing, and preachers are resorting to violence. An overhead bird’s eye view of the action sees the fight from that vantage point and the camera pans over to Hollywood sound stages.

MUSICAL COMEDY: A group of male dancers are in top hat, white tie and tails and cane when one dancer makes a mistake and messes up the whole routine. Sissy Mary Director Dom DeLuise (in beret and jodphurs) steps up to show ’em how it’s done.

The Westerners come bursting onto the music set, knocking down walls, hootin’ and hollerin’ and riding horses onto the set. There goes Taggart again ( he just ‘follows orders’ ) punching DeLuise right in the gut. The dancers retaliate by giving the western brutes a good thrashing; well, as good a thrashing as these guys could do, if you know what I mean. A cowboy punches a dancer square in the stomach and when they come out the other side of the set, they’re walking in an embrace. Two dancers do a 10-second Esther Williams synchronized swimming bit.

THE COMMISSARY: Actors are in make-up having their lunch and a studio walking tour is about to go inside. Before you know it, the Westerners and

the Dancers break on through to the other side and spill their brawl into the studio’s high-class cafeteria. A man in a Chef’s hat announces the great Pie Fight ( promptly gets a pie in the kisser ) and now it’s really ON. It’s a hot mess in there with pies flying within an inch of everyone’s life. Pies, cowboys, dancers and horses all entwined in fast-motion. The walking tour leaves the commissary, every one covered with pie on their faces. What a mess!

Taggart is punched by that big galoot Mongo ( Alex Karras ) and he goes sliding into the cash register. I LOVE the way the cashier rings him up pointing to the food all over his face and clothes. LISTEN to the matter-of-fact WAY she says: “Yankee Bean Soup, Cole Slaw and Tuna Surpriiiise.” I am laughing as I type this. She ain’t playing. He’s going to have to pay for that. See the Great Pie Fight:

Did you see how Hedley Lamarr ( played by the great Harvey Korman ) comes out of the Men’s Room into this melee and when a pie comes flying near him, look at his face – the sly crooked sheepish smile as he slowly backs back into the bathroom and immediately comes out again, his puss full o’ pie. Love the way he minces out of the dining room.

At this point of the movie, it’s now more sight gags than pratfalls and anything else.

The riot cuts to outside studio with the mob running for their lives down Olive Avenue (4300 W). Hedley hails a cab: “Drive me off this picture!” with Sheriff Bart and his absolutely gorgeous palomino hauling ass after him.  Isn’t this a beautiful horse?  So interesting how the very next immediate shot is at night. Continuity error or intentional?

Hedley pulls up to Grauman’s Chinese Theatre. ( At the TCMFF last year when “Blazing Saddles” was shown AT the Chinese, the crowd gave the theatre rousing applause when it makes its appearance in the movie! )

At the ticket window, Hedley pushes some college kids out the way and buys his ticket. I laugh when he pulls out i.d.:

I love the contemptuous way Hedley throws down another buck and says: “Pain in the ass!”

He passes a married couple looking at the famed footprints of Grauman’s Chinese:

HA! He’s fighting a losing battle on THAT score.

Inside the movie lobby there are cows near the candy stand and I always get a big kick out of Hedley ordering my OWN personal favorite movie candy:

He almost sits on a disgruntled patron ( was that the frontier gibberish guy? ) in the darkened theatre and when Hedley looks up at the screen he sees Bart riding up to Grauman’s. Again I LOVE his reaction…he spits out the Raisinets and says: “SHIT!” bolting from his seat.

Oh man…I LOVE the meta-ness of the last few moments of the film. The movie is seeing a movie of itself in the movies. How clever of you Mel.

The gun duel is no contest as Hedley is mortally shot. He falls face down – in profile – into wet cement. His name is written in cement ( how’d THAT get there?! ) underlining its correct pronunciation for the final time.

This movie touches all bases in terms of physical comedy, slapstick, sight gags, verbal jokes AND befouled bodily functions to last you your lifetime. You have to be smart…you have to know your movie references. “Blazing Saddles” is a grand slam triple-header in that regard and forgive me if I jacked up the baseball metaphor.

Folks, there’s more where that came from. Click on this banner. ( You all know the drill by now, don’cha? ) If you click the FALL banner below, you’ll find more entries on what strikes bloggers’ funny bones. And if you can, check out “Blazing Saddles” in its entirety. It’s hilariously clever and sadly, we’ll probably never see the likes of it again. See the movie. Hey, you’d do it for Randolph Scott. 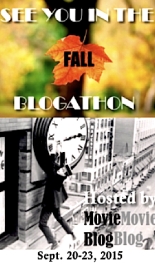 To see my first entry for the “SEE YOU IN THE FALL” blogathon, please click onto:
( “MR. MUCKLE“ ) for some more funny.