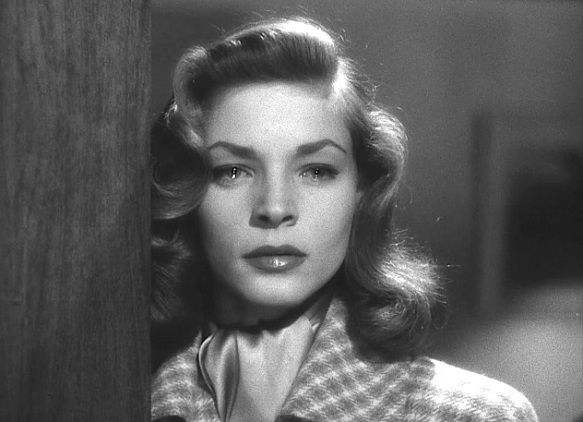 When Lauren Bacall looks at you, or gives you her side-eye glance, brothers and sisters…you  are  done! Her eyes are scorching laser beams, slicing through you like butter. Her gravelly voice can be commanding, withering or mesmerizingly sultry. When she died last August 12th, 2014, it was a shock to all in the classic film community. She seemed so indomitable. She could glare death into submission. What was I thinking.

It truly sunk in that she has passed away as I bought several New York newspapers the day her passing was announced: 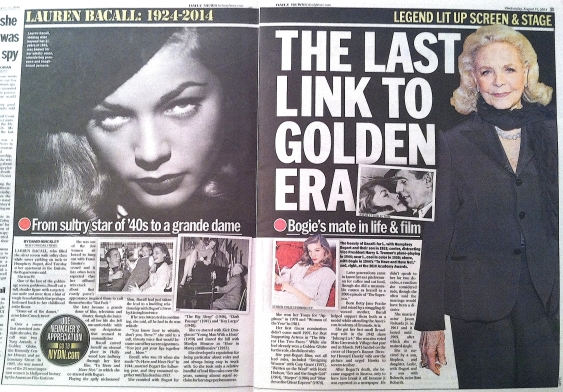 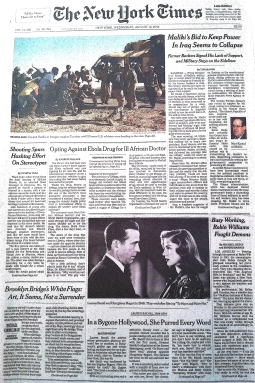 That’s just me; being romantic again about the power these film stars hold over me. Here in the cocoon of this blogathon, I can speak of one of my favorite performers when Crystal’s blog: In The Good Old Days of Classic Hollywood presents THE LAUREN BACALL BLOGATHON. My “Bacallathon” entry will be Douglas Sirk’s 1956 film “WRITTEN ON THE WIND.” 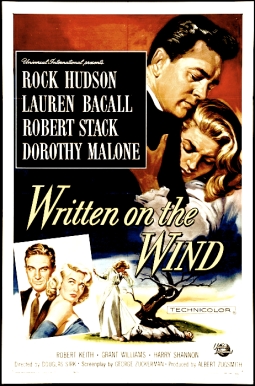 Lauren Bacall gives a subtle quiet performance as Lucy Moore in “Written on the Wind.” She starts off with edge, sharpness; after all, she’s an Executive Secretary for a top advertising agency in NYC. The film’s opening shorthand gives us the score on her.

She wants a career. Picture her at 21 with a martini in one hand, witty repartee in the other and fending off Madison Avenue Casanovas with the other other hand. She says so:

By mid-point in the movie, we are in the SAME predicament as Bacall:

The movie is actually told in flashback to show how we ALL got to this point. And for the sake of full disclosure, I must admit I don’t understand her character’s psychology in even marrying Robert Stack in the first place. The why of her marrying him is the crux of the story and sets a lot of things in motion…check out this clip:

So…you tell me. He never blinks, and has a glassy glazed intense look on his face. If I question her motivations for marrying this guy, the movie might be over in 20 minutes, and you might not want to read about her any further.  It does naggle at my brain. But lets just take it as a given. 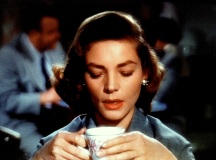 Now even though we   all do know
Bacall has edge, her panther-like persona is not brought to this role. She is rather demure I’d say ( often casting her eyes downward. ) She is partly an observer…a conduit of the crazy goings-on of this waaaayward family of the rich and neurotic she’s married into. She’s warm. She exhibits a calming kindness and understanding. Of course all bets are off when it comes to dealing with her new sister-in-law, played with fire and pizzazz by Dorothy Malone. Malone plays Iago to her brother,

dropping innuendoes and sarcasm like bar-bells. If he had any self-esteem he wouldn’t believe her but, well…therein lies the rub. When she belittles him to his new wife, Bacall steps up to the plate in his defense, swatting down her dear, heat-seeking sister-in-law:

MALONE:   “Anyway, about your marriage. You have my condolences.”
BACALL:     “Pardon me if I seem to be brushing you out of my hair.”
MALONE:   “Darling I’ll send you some of my towels. I believe you’re still wet behind the ears.”

I love their exchange. Bacall’s no patsy. She doesn’t show fire, but the sharpness is there. What’s more, she tempers that edge, which is what I like about her performance in this movie. She has a nice scene when she meets her father-in-law, played by Robert Keith; he senses she’s no gold digger – she has a down-to-earth personality and a direct gaze. Though his manner is avuncular, he’s got his issues too. He IS the Dad who put his friend’s son ( Rock Hudson ) above his OWN son ( Robert Stack ). 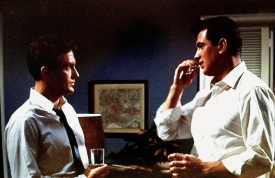 This is one of the things that makes Bacall sympathetic to Stack. With her influence, she makes Stack want to be a better person. And though I STILL see no visible means of his being a tangible asset to the family oil business, he’s laid off the booze and has gotten rid of the gun he sleeps with underneath his pillow ( RED FLAG #1 or #5,374 ). Sirk leaves no foreshadow unturned, heralding it with dramatic music. But can one person prop up another person’s life? Bacall’s about to find out it’s an impossible job.

Back In the Friend Zone is Bacall’s ‘Rock’. Rock Hudson did see her first at the ad agency

but faint heart never won fair maiden. His pal ( Stack ) swoops in with his charm and millions ( and unwavering gaze ) – probably their dynamic since childhood. With Bacall marrying Stack, Hudson sort of stands watch over her from the sidelines. He’s a comfort to have around even if they don’t act on their feelings. Oh yeah, there are feelings. She definitely shows us she’s attracted to him; they’re shy around each other. And Stack is as territorial as a dog with a mailman’s leg. She’ll need Hudson more than ever now.

Her father-in-law has just keeled over dead from a heart attack in the classic Mambo of Death dance scene ( click Malone above for her dance scene and here for her Oscar-winning speech ). Bacall’s reaction is a combination of horror and numbness. Keith’s death leaves her alone with a nymphomaniac sister-in-law and an alcoholic husband. Hudson’s sort of an enabler in all this, not definitively putting his foot down. So NOW, he’s had enough?

“To Hell with the Hadleys!!”

He’s going to a safe place ( Iran!!! ) to work for another oil company and get away from the lot o’ them. I like how subtly torn Bacall shows us here; her body language leans slightly forward…anxious to stop him, but stopping herself ‘less she looks like she wants to stop him…which she does.

The soft sweet pain and yearning of unrequited love.

The descent begins in earnest when Stack believes he can’t father children and Bacall tells him she’s pregnant. He goes from zero-to-sixty…downhill. All Sirkian Hell breaks loose.

And Bacall is caught in the cross-hairs.

Many times Sirk positions Bacall in scenes in the middle between Hudson and Stack, or puts Stack between Hudson and Bacall. She plays calm and understanding. She’s fearful. She is a woman in trouble in a troubled marriage using coping mechanisms to survive this. She IS a damsel-in-distress but doesn’t go big or showy. Bacall is usually a cool customer; calm, smoldering and collected. I see her maturity as an actress through quietly shifting emotions to weather this soap op’ry storm with a good message…even a smart gal like Lauren Bacall can get in trouble.

You can get all manner of Lauren in this “BACALLATHON”. To see one of her other screen personas all you have to do is put your fingers together, and click. Click the banner for other blog entries. Click the YouTube thumbnails for a nice tribute to “Written on the Wind” accompanied by a Britney Spears song ( yes, Britney! Give it a chance ) – and for the film’s official trailer below. Thanks for reading. Lauren Bacall, you made your mark. It’s your birthday, but you’ve given us the gift. YOU.