“Let’s drag out the ‘victimized woman’ and talk about the gals with guts, grit, gumption and genius!” – Jo, The Last Drive In.

There was only one actress in one film who immediately comes to mind. And that was ELLA RAINES in “PHANTOM LADY.” 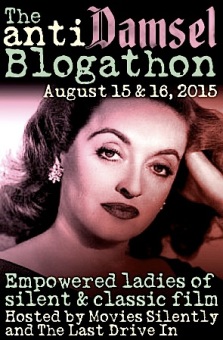 I saw the announcements for the ANTI-DAMSEL BLOGATHON hosted by Fritzi of MOVIES SILENTLY and Jo of THE LAST DRIVE-IN and my heart skipped a little beat. No arrythmia, nothing serious, nothing to call 9-1-1 about, but it did do a small happy dance. This quote in particular caught my eye: 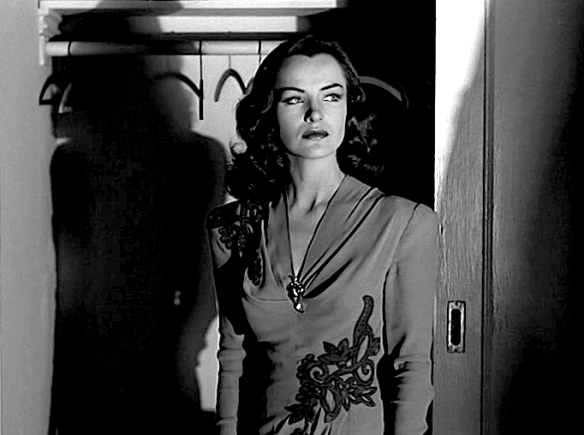 So many characteristics come to mind when I think of Ella Raines in this film: smart, resourceful, brave, intrepid, relentless, determined, competent,  a little foolhardy, dogged and smart. Did I mention smart? Yeah smart. Yes, even though she puts herself in harm’s way in her effort to prove her boss innocent of murder, I think she smartly follows leads in a way I haven’t seen other actresses of the 40’s do. She goes it alone because the Law takes a blind eye. She goes it alone because she’s a woman in love. 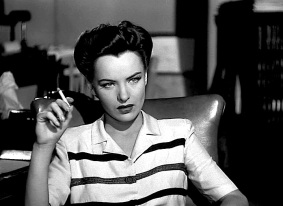 When we first see Ella in her upsweep hairdo and straightening her stocking seams, she’s a cool executive assistant, competently taking the reins of her boss’ architectural firm while he’s under suspicion. Once officially arrested, Ella attends his trial every day for months. 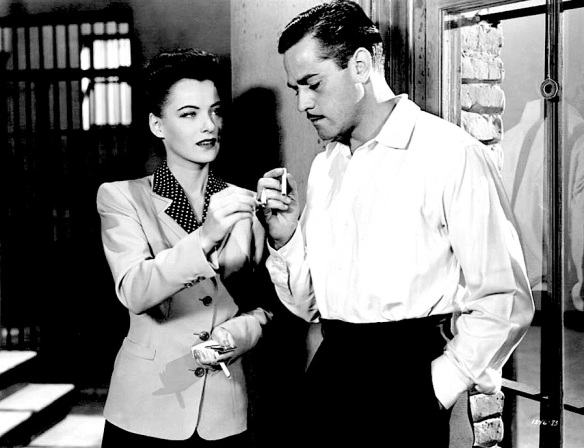 “You need someone to help you who really wants to. Someone who can’t be beat.”

I suppose I can’t talk about Ella’s intrepidness without somehow describing the look of “Phantom Lady” and the look of the situations she’s put in. All praises to director Robert Siodmak and his D.P.: Woody Bredell for the look and pace of this movie. There’s a full world shown in this movie. Lots of extras. There’s an economy of sets and actions but things don’t look low-budget. At the trial, we never see folks on the Stand testifying. We don’t see lawyers pontificating their side of the case; we hear them, but the focus is on the audience…on Ella. She’s the focal point of the entire movie, and she moves the plot forward. 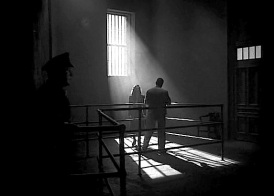 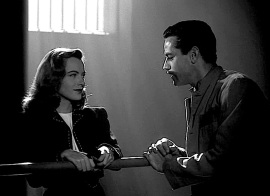 When Ella visits her boss ( played by the stressed out, puffy-eyed, attractive Alan Curtis ) in prison, there’s a stream of light that feels like a warm hazy blanket over the scene and makes me think of church. It’s a lovely shot. She follows leads into dark and lonely places; places I would not go even with a can of Mace and Mike Mazurki by my side. I must check IMDB but off the top of my head, I think Siodmak is an acolyte of Val Lewton films. Shadows and footsteps and silence stir one’s imagination. The LOOK of the film is seductive. And with Ella in these situations, she’s not running from someone…but FOLLOWING them. D’ya see how that makes her an ANTI-DAMSEL?? ( Huh? Huh? ) All of a sudden she’s there. No set up. No preface. A girl walks into a bar… 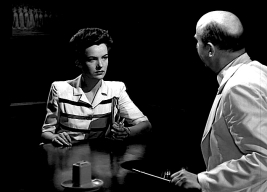 THE BARTENDER – Ella walks into the bar, orders water and stares him down. No matter the bar is empty, crowded, rain or shine, she’s there.  Staring. Her eyes dark, unblinking, like a shark; by dint of her stare, willing him to tell the truth of what he saw. She unnerves him. Waits for him outside. Follows him into the dark. But women are afraid of the dark, right? She follows the bartender to a deserted El train station stop. This is the eeriest of the movie’s scenes because it’s in a normal setting. Not the gothic old dark house, but a train platform. I wait on those myself after a night out. Love the pattern of shadows the station lamps leaves. It’s just Ella and the bartender. He looks around for witnesses and sees none. He walks towards her. It does not end well…for him. 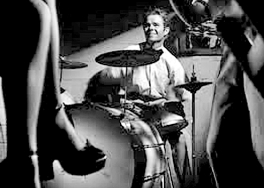 THE DRUMMER – Elisha Cook Jr. plays the hopped up drummer at the music revue Ella’s boss goes to see with The Phantom Lady. He surely must know something. Ella’s there, and loaded for bear: fishnet stockings, smacking on Bazooka gum ( ok…Wrigley’s ). She looks trampy and gives him the come-on. They go to an after hours jam session in one of the wildest, most sexually-laden subtexts I’ve seen from a movie from the 1940’s. 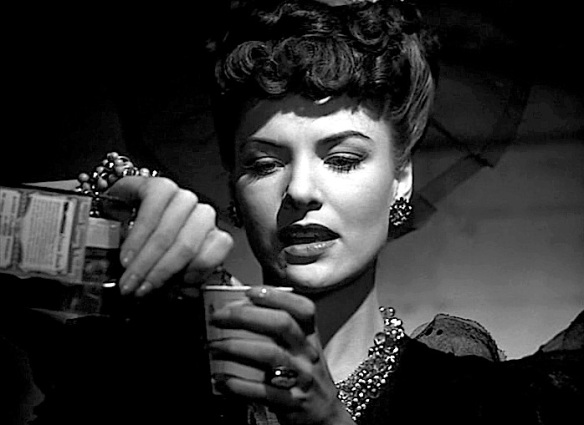 She plies Cook with alcohol, and lets him kiss her full on the mouth. See girls, that’s the part that always gets me…it’s in his kiss; his wet, juicy, slobbery kiss. And then what puts me right under the sixteen-wheel bus, right over the edge…is the look of disgust on her face. What I take away from that scene is not only the crazy orgasmic spin on it all, but the nano-second of disgust on Raines’ face before she plies on more lipstick. Hell, she can’t even wipe his kiss away, but must embed it deeper.

This is a crappy clip of it on: YouTube, but it will give you some idea if you don’t know what I’m talking about. 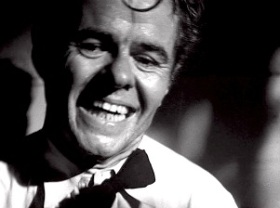 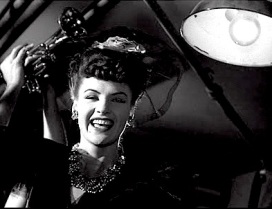 The scene has Dutch angles, quick edits and Ella urging Cook to go faster…faster…fassssster. As if THIS wasn’t enough, she continues to put herself in harm’s way. She goes to the room of this musician, this man…this stranger. The scene plays in the dim room as she sits on his lap and tries to pull information out of him. He’s trying to get what he wants from her but gets rough when he realizes his loose-lips-sinks-ships’ confession reveals some guy has paid him $500 to say there was no dame. Ella is really being put through her paces. Cook mauls her, but she manages to barely escape. She does now have the Detective on her side. It is fine character actor Thomas Gomez as Detective Burgess who senses ( after the trial is over ) something isn’t right with this case. 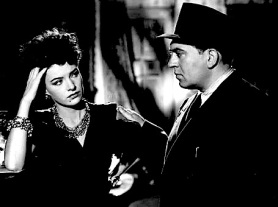 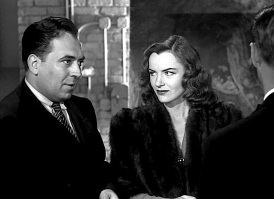 But see, the actual murderer has been tailing Ella, and pays Cook a visit. He tells him: 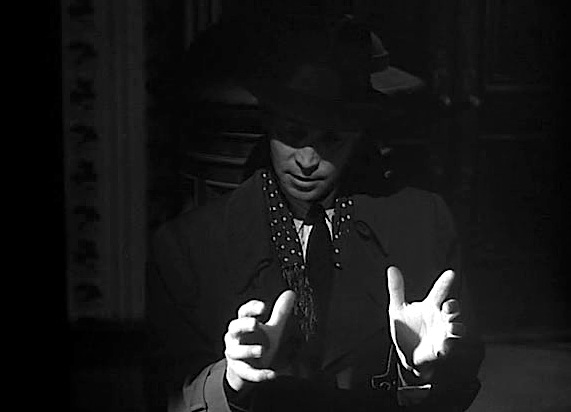 “She would have humiliated herself to get you to talk.“

It does not end well — for our hopped up, hepped up drummer boy. But when did it ever…for Elisha. ( Here is a nice video tribute to Cook. Check it out when you finish page 2. )