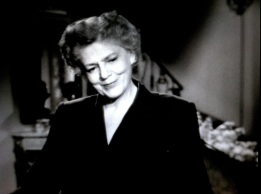 A woman’s place? Naaaah, Ethel knows how to give a young couple some alone time:

Barrymore:   “No man ever made coffee for me and no man
ever will. Where’s the kitchen?
Andrews:      “There.”
Barrymore:   “That’s where I belong. You show Kathy  around.”

“Thing about coffee is it keeps me awake. Nothing more ridiculous than being unconscious on a bed. Besides, I have insomnia; like to blame it on the coffee instead of my conscience. My heart’s an old waste paper basket filled with unpaid bills and paperback novels.”

“I never knew a fish could dance doing a first-rate hula.”

She’s not above rubbing her aching feet at a concert or mugging at a Society dame who’s trying to sssshush her during a Salon recital. She’s fun. She keeps it real:

…And even though it is all a ruse on Merle Oberon’s part ( pretending to be blind, holding a composer contest in the hopes Andrews can win ) Ethel is empathetic to her niece’s feelings. And since she’s supposed to pretend to be an artist…why not go all the way:

Oberon:      “What on earth are you trying to do?”
Barrymore: “Painting. I thought I might have a small whirl at it. I thought I was supposed to
be an artist.”
Oberon:      “What’s that supposed to represent?”
Barrymore: “You wouldn’t dare say that in front of a Picasso. As a matter of fact I started to
paint Dan sitting at the piano, and it turned out to be the piano sitting on Dan.”

There are all sorts of twists and turns in “Night Song” that make things so touch ‘n go. Merle Oberon gets a bit beat up there by bitter Dana Andrews. He has to soften. She has to toughen. And standing by watching all this is Ethel Barrymore. In this movie, she is a tad flirtatious and coquettish. Not in that silly girl saccharine way. But as a Woman, mature, one who’s seen all manner of things including rejection. She judges people, figures them out. She has quips and cracks. She’s caring. She oversees things and jumps in when necessary. And boy, is it necessary. I imagine she’d be a very formidable enemy. This character may be nothing like Ethel Barrymore, and Ethel Barrymore may be nothing like this character. But I suspect there’s a lot of each other in each other. And regardless…

I would sit at her feet.

If you’re interested in reading more about Ethel and
her brothers Barrymore, you’re just a click away: