I haven’t seen this one in for ever and it is chock full of plot: pirates, typhoon, jewel thieves, unrequited love, rekindled lost love, duty, redemption, Gable struggling between what he wants and what he needs…and the wonderful wardrobe malfunction by Harlow that remains in the picture. What more can I ask of Tay Garnett’s 1935 hit:  “CHINA SEAS”?

GABLE – I mean really, didja ever see a thing more dashing than Gable? Good grief, in those Captain whites or the black turtleneck, unshaven and hair undone or spiffed up like a shiny penny – he barks orders to crew and girl alike. He’s very commanding. But he is in the typical Gable pickle. He thinks he’s in love with an upper crust English gal, when he’s really in love with a girl who knows what’s what. I don’t know that I believe 100% his love for Rosalind Russell, but I definitely believe his passion for Harlow. We know where he belongs; he just has to catch up with the audience. And speaking of Harlow…

“You and I are friends. We’ve had a lot of fun together and as far as I’m concerned you’re a number one girl in the archipelago. But I don’t remember making any vows to you nor do I recall asking for any.” 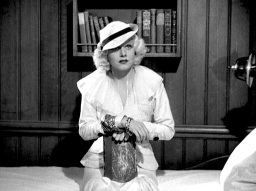 HARLOW – What can I say? She’s a satin gem. She knows exactly what she’s doing. She’s in love, she’s jealous, she’s hurt, she’s angry. She’s everything you could want from pre-code or post-code. Harlow’s just a dream. See her get revved up at the table when she’s being put down by the snootiest and crustiest of the upper crust. She’s puts up with losing her man but she also puts her dukes up and won’t back down. 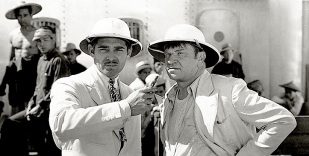 BEERY – I liked the big lug in this. Oh he might’ve been spitting jealous of Clark Gable’s rise in stature on the M-G-M lot ( get real Wally ) and vowed not to work with him again. But it doesn’t show in this film. There’s charm and humor in his scenes and he’s wonderful with Harlow ( recreating the spark they had as a battling couple in “Dinner At Eight” ). He’s not gruff, but Irish and roguish. Oh he still wants to steal some gold, and fairly cripples Gable in an iron boot. But he’s so charming and in love with a dream he’ll never catch that I really like him in this. 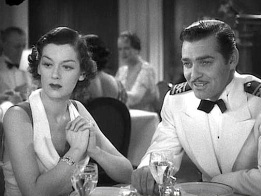 RUSSELL – She’s moving up the ranks at the studio but still a supporting player in this. Hair in tight curls like some kind of Margaret Lindsay-type, she’s the girl Gable aspires for. You know…like he did with Grace Kelly or Mary Astor. But she’s a good egg in this. She’s upper crust, but down-to-earth, (uhmm…chasing) Gable to this port of call. Roz really doesn’t have much to do in this movie and her character good-naturedly gives him up in the end, but she’s a nice presence and contrast to Harlow in this. Russell’s career will come into its own shortly ( with “Night Must Fall” “The Women” and “His Girl Friday” looming ahead in her future ) with a more distinct screen persona and stunning good looks. But she does a good job in this.

For a silver haired man of 56 at the time of this film, he does his own stunts as a man crippled during the course of the movie, but goes out like Veronica Lake in “So Proudly We Hail.” There’s also a fascinating actress names Soo Yong who is allowed to play her character Yu-Lan with upper class bearing, speaking standard English and allowed to sit at the Captain’s table. She really gets in a couple of good digs at Harlow’s expense. 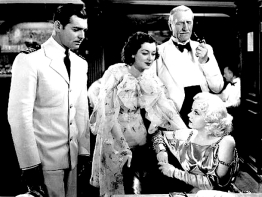 Directed by Tay Garnett in a nice breezy fashion, we see he can handle crowd scenes, and the typhoon scene is very convincing, along with that rolling steam engine crushing every thing in its path. Garnett had command of things. “China Seas” is like sparkling champagne to me, all shiny black and white, bubbly and gritty.