The Ultimate Errol Flynn Leading Lady. The heart and soul of “GWTW.” She weathered victoriously against the hurricane that is Bette Davis. She was a fair maiden, a damsel-in-distress, an old maid learning cruel life lessons from those who should have protected her most. She played a good AND evil twin…fought her way out of an insane asylum and an elevator. She was an unwed mother. She was this and so much more in her illustrious career. She is Olivia de Havilland.

She uses her dulcet voice to calming effect. Her line readings feel spoken, not scripted. Her mellifluous voice can turn steely hard when she says: “He came back with the same lies.” Hard, cold, flat. Her eyes so kind and smile so sweet…but when she turns on Bette Davis in “Hush, Hush Sweet Charlotte” there’s an intensity you want no part of. It feels to me, she teeters between fragility and quiet steely strength. She’s feisty. As much sexual magnetism as Errol Flynn has, her characters do not fear him. Think of their pairings. He has to work to win her: 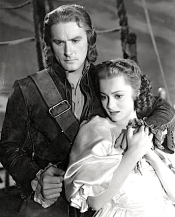 From my friend, Wendy Merckel:

“When I was little, I thought she was the prettiest of stars. She has an uncanny way of looking directly into the camera in some photos…like she’s looking into you right through time. It gives me chills in certain pictures. But the one that first made me notice was this: 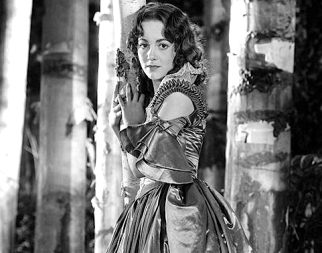 It’s as if she’s looking straight at you. Her persona was almost stately and yet it’s obvious there was far more to her. Such a lady… and yet there is something really strong underneath. I think she must have had a terrific confidence somehow.

The scene in ‘They Died With Their Boots On’ is perfect. She doesn’t look at him. Together they move in synch with one another both hiding their foreboding. But they both know. And she holds herself up…till he leaves. It’s palpable, the tension, love, regret…regret that it will end I mean.”

I second what Wendy says. In this dear wonderful goodbye love scene in “They Died With Their Boots On”, Custer and his wife Libby live their last moments together NOT saying their final goodbyes. It’s so delicately done…the things unsaid. They protect each other. DeHavilland is 25 years old in this scene and her maturity is amazing…tempered …steady…true. This is the last movie de Havilland and Flynn make together, the last scene they filmed together. It makes this goodbye all the more poignant. The music underscoring their goodbye is by master, Max Steiner…tender…heartbreaking. It’s a scene difficult for me to watch without tears in my eyes. I offer you these screen caps so you can dwell on deHavilland’s face and expressions.

I liked how Wendy described the three screen caps below I sent to her as:
Photo 1. Embarrassment, trying to explain
Photo 2. Sinking feeling in stomach, truth…resignation Photo 3. Presentiment of fear, heartbreak

The halo’d effect and lighting in this scene is dramatic and wonderful. Then Flynn steps from the shadows into her arms:

“Walking through life with you ma’am, has been a very gracious thing.”

In “The Snake Pit” a sense of humor comes through even in the face of those terrifying conditions. In “Gone With The Wind” she plays the hardest role, the Nice Girl and makes her goodness a character strength. In “To Each His Own” keeping a vigil and love for her child she has had to give up wins her an Oscar. DeHavilland’s acting is not showy or large. She doesn’t chew scenery. Who else could make it a triumph exclaiming: “I can be very cruel. I have been taught by Masters,” and then walk up those stairs taking the light with her. I find her to be still. Contained.  Not flashy and flamboyant.

There’s so much more to say about this Actress. We have The De Havilland Decision because of her; actors owe her a debt of gratitude for that. Actors are no longer “indentured servants” to a studio – working for them forever. Bette Davis started it, but de Havilland finished it. DeHavilland made her way from ingenue, to a Matinee Idol’s leading lady. And as Ginger Rogers did, deHavilland leaves an established screen partnership to really venture out on her own and see what she’s made of. Of course, she did films without Flynn before, but now, when one puts a final period on one thing…one start another. She showed us what she was made of in a myriad of roles. Her piercing eyes tell a tale of love, fear, contempt or desire. Yes, she is one of a handful of the truly greats from Hollywood’s Golden Era who is STILL with us. She is Miss Olivia de Havilland, two-time Academy Award winner, and she is 99 years old today.

Attention must be paid.

Here is one more look: