Well wouldn’t you if you were participating in the Sex Blogathon? Yep. Click on this banner and dive
<—into the smorgasbord of sex and desire in classic cinema by bloggers all over the blogosphere. My contribution will be the Ernst Lubitsch 1931 film “THE SMILING LIEUTENANT.”
____________________________

I first saw this movie at TCM’s 2015 Classic Film Festival this past March. It’s the pre-code era where folks slept in single beds (!!!) and there was a certain frankness to things. This whole movie, from soup-to- nuts, is an open unabashed love fest to sex, desire and love, with no shame and no guilt to muck up the fun. It’s a soufflé of sexy silly fun all whipped together. With songs and metaphors thrown in all over the place, you know “exactly” what they were getting at, getting on and getting into. This frothy, sexy farce drips with the Gallic charm of a very young Maurice Chevalier. Forget him in “Gigi” – an old man thanking heaven for little girls. ( Wha’?! ) You’ve got to see him as a young man; a randy lieutenant, whose smile and wink gets him into loads of trouble, both good and bad.

Imbued with the masterful Lubitsch Touch, the gossamer plot of “The Smiling Lieutenant” is stitched together with the sheerest threads. Chevalier is a Lieutenant in the King’s Guard. While on parade, he sends an ill-timed smile and wink across the courtyard to his lover, Claudette Colbert. Just as he does that, the King’s procession rides by and the princess ( Miriam Hopkins ) mistakenly thinks that wink is intended for her.

To say, Chevalier likes sex in this movie, would be an understatement. He rolls in it, swims in it, is satiated by it. When the movie opens, a smiling blonde cutie is leaving his apartment in the morning. Lubitsch takes us inside where Chevalier takes us into his confidence and jauntily sings a song about being a boudoir brigadier. He’s positively giddy. He mugs. He’s all over himself. Moments later, he’s visited by a fellow soldier
( Charlie Ruggles ) who is married but smitten and dying for a rendezvous with violin band leader Colbert. We have a married man openly lusting for someone other than his wife. The film doesn’t judge him. He just doesn’t get the girl.

Chevalier steals Colbert right from under Ruggles. ( He never really stood a chance, did he? ) There’s a bit of haggling and negotiating between Chevalier and Colbert about her staying the night with him.

SHE: “First tea. Then dinner. And then…maybe breakfast.”

Chevalier’s on top once negotiations’re complete. 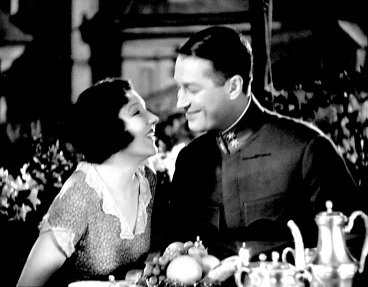 It’s breakfast time, and their cute little “morning after” song is fraught with metaphoric lyrics like: “You put the magic in the muffin.”   Ahhhh oui. Bon appétit. The audience looooved it.

Chevalier has to make it right with the King ( played so wonderfully jolly  by George Barbier ) and the Princess and explain himself to them. Lubitsch just digs the hole deeper for Chevalier. Chevalier wins over the Princess’ dour, middle-aged ladies-in-waiting by being able to spell the name of their country:
F-L-A-U-S-E-N-T-H-U-R-M. 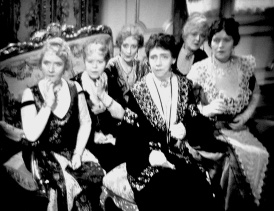 I’m telling you, Chevalier is just catnip to the ladies. He’s won them over. Pheromones waft through the Royal Palace. Hopkins is hooked, lined and sinkered in love ( or is that lust ) with Chevalier. There’s a cute cross-cutting scene between Hopkins extolling his charms with her posse, while Colbert experiences his charms up close and personal. A lot of kissing and hugging and lap sitting. Yaaaaay, pre-code!

The machinations and snowball effect of this crazy smiling plot force Chevalier to make an “honest” woman of Hopkins by marrying her. ( In other words, he’s just hoodwinked! ) But he will not seal the deal on their wedding night, much to Hopkins’ frustration. What a topsy turvy world Lubitsch puts us in.

“You can lead a horse to water but you can’t make
him drink. That’s as far as I go. That’s my limit.”

He does not love her; and with her bloomers, Princess Leia hair buns and sheltered ways …does not desire her. He hooks up again with Colbert with a most ingenious ruse. Complete with orchestra to accompany a night of love, they get to putting more magic in the muffins.

If music be the food of love, uhmmmm, well, you know what to do… 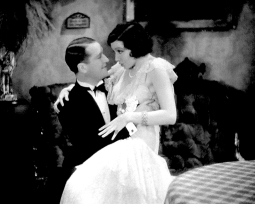 NOW he can come back home a happy satisfied man. The guy is walking on air again. Lubitsch is killing me. Chevalier’s stand-offish manner with his wife and father-in-law changes to  profuse happiness, which is promptly misinterpreted by the poor and clueless King and Princess. ( Look at that face. I’m telling you, I am in love with the Daddy King and would love to play checkers with him.  )

“He called me Daddy.”

Colbert has sex without marriage – Hopkins has marriage without sex. One is protected, the other…without protection.

We’ve seen Wife vs. Mistress scenarios since 1931 but Lubitsch puts a refreshing take on it. First they fight, then they commisserate and then:

“Let me see your underwear.”

See…the one thing women bond over: clothes. Bloomers, underwear and such. This is a great fun scene, the transference of power from Colbert to Hopkins. Colbert makes a jazzbaby out of Hopkins by jazzing up her lingerie ( rhyme it with melody ) and making her the woman Chevalier would desire. She teaches and trains her well. ( Mmm…those lessons. )

“Girls who start with breakfast, don’t usually
stay for supper. Take good care of our Niki.”

Colbert generously and painfully gives him up. I didn’t quite see that coming; the generosity of Colbert to do this. I think I’m still at a lost as to why she does this. She does love Niki.

It’s a very poignant  scene; Colbert’s very expressive as she writes her Dear John letter and leaves her garter and apartment key. These two gals could become friends but I think this is the end for them. Colbert’s walking away puts a lump in my throat.

But Lubitsch switches the tone on us once again.

There will be no checkers tonight. Lets see how apt a pupil Hopkins is…

When Chevalier sees the transformed Hopkins, he is deeeeeeeeelighted. She’s sexy wearing a short cute little negligee, smoking cigarettes and playing a modern tune on the piano. He can’t believe his eyes, gets fortified with some alcohol, and finally runs down to Hopkins’ Galatea, to reap the benefits of Colbert’s Pygmalion. He’s a happy camper. They both are.

Now if I were to go by the Letter of the Law with “The Smiling Lieutenant” instead of the Spirit of the Law, I could get my dander up. Chevalier uses women, marries under false pretenses instead of telling the truth, and cheats on his wife. He suffers from the Peter Pan syndrome: he won’t grow up, juvenile, immature, wants what he wants. Is he interested in love or just his own pleasure? Is he simply led around by his own hap-piness? ( Didja see what I did there? ) Why do Colbert AND Hopkins become allies instead of competitors all for Chevalier’s pleasure and neither of them kick his butt to the curb?

THAT WOULD BE CRAZY!!! What am I, NUTS?!! The Letter of the Law? HA! WHY would I cut off my nose to spite my face, instead of just going along with the flow and Spirit of Lubitsch.

And we come full circle. He’s at his bedroom door talking to us again; mugging and singing to us about how happy he is. Inside we hear Hopkins chime in with a “ Ra-ta-ta-ta, ta-ta-ta, ta-tahhhhh!” And you know she’s happy too. This was a light fun movie with its double entendres and metaphors and all manners of whoopeeee…the movie doesn’t pass judgment on any one, so why should we? “The Smiling Lieutenant” is good clean sexy fun. Ernst Lubitsch says so.

Lubitsch with his “Design for Living” stars Cooper, March and Hopkins

Don’t stop here folks. If you’re curious about films like “The Long Hot Summer”  “Design for Living” “She Done Him Wrong” “Born To Kill” “Pillow Talk” “The Postman Always Rings Twice” and many more films, click this link—> The Sex ( Now That I Have Your Attention ) Blogathon for more. This will be our secret. Don’t worry. I won’t tell…    😉