Hi – I started off my sixth month of blogging by telling you my favorite films made in the 1930’s. I don’t know if you had a chance to go through it because it was lot of information. But if you did, thank you, and you could compare your list to mine. ( How crazy off am I? ) To do this list, I pulled out my old Pyramid publishing book which I bought back in 1978. I skimmed through it to make sure I wasn’t missing anything and came up with my final tally. Below are my ten tip top top ten favorite films for each year of the 1930’s. 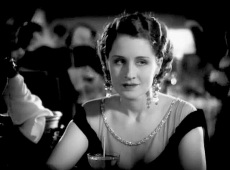 My film viewing is very limited for 1930, but from what I’ve seen, I really like this Norma Shearer film. Her trust broken by her husband’s infidelity she goes for payback by doing the same thing. Somehow…it doesn’t work out quite the way she thought it would. Movies were beginning to talk. Lets see what women are saying.

You’d think my favorite films would be the rat-a-tat-tat of gangster films, or horror movies that move a little slow and stagey for me. No, my favorite film for 1931 would have to be: 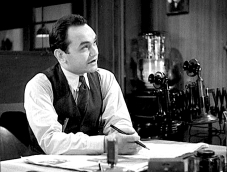 The social media technology might’ve changed, but I can’t tell you just how topical this old movie feels; selling newspapers no matter what the human cost of the story is. Edward G. Robinson’s up to his neck in printer’s ink until he can’ts stands no more. Rooting him on, the great Aline MacMahon. Not just reporting the news, but creating it.

I know there are great gaps in my movie-watching for 1932. I love how fun “Thirteen Women” is, and the thought-provoking and unsettling “Freaks” is a must-see. The sex appeal of “Red Dust” is off the hook but if I have to pick a favorite…I’m really going to have to go with…

It’s a delirious downward spiral into drugs and depravity. Dvorak is wonderful in this, going down like Icarus. Her final plunge is heart-stopping.

Peace, peace; her career’s kingdom for some peace. I don’t know if art imitates life, but Harlow is a game girl in this fast-paced, screwball, free-wheeling comedy. She gets to put her thumb in the eye of a couple of entities: family and celebrity. Harlow goes toe-to-toe with the manic energy of Lee Tracy, and bounces off a good supporting cast who…support her. Oh how I WISH TCM would show “Bombshell” at their next film festival. It would be a laugh riot. Please, check out my blog post about Harlow and this film.

“So don’t you think I’m the same woman that used to eat out of your hands because I’m not. I’m a whole lot wiser and just you put that into that head of yours!!”

Ahh Aline. So strong. So vulnerable. This is a great woman’s picture. Oh no, not in that treacly weepy way that term is meant, but we see all manner of Woman portrayed in this desert drama. How will Aline deal with her past when it reaches out to her? Check it out. You’ll see. My detailed review? HERE.

I like the adventure and journey of it. I like what a woman in love would do. I like that time means nothing withOUT the one you love. A nice fantasy adventure. And a woman’s in power.

We’ve got four pros here, at top form in Comedy. Surprising to me was the teamwork of Tracy and Powell. They played off each other expertly. This is just a plain funny movie of a newspaper sending out their best reporter to entrap an heiress who is suing them. Read all about it, read all about it —> here.

I like the gutsy grit of “Marked Woman.”  And “Stage Door” has Hepburn & Rogers leading the charge…sublime. But this one right here…this one is my Martini movie. It sparkles. It’s perfect:

Forgive me, but this movie hits the “G” spot. I guess it’s my cinematic barometer. If a person does not laugh or like this film, well…l mean what’s not to like: the love story, the comedy, the leads, the lines, the easy pace. The disaster scenes in “The Good Earth” “In Old Chicago” and “Hurricane” are pretty state of the art. But come on: Cary Grant and Irene Dunne, in perfect synch…State of the ART. Leo McCarey won an Academy Award for this classic comedy.

Is this a dramedy? I dunno. But I love the serious tones of this one. It almost feels subversive. Who doesn’t want to make money. Grant has the idea to play now and work hard later. He’s got a fiancee who doesn’t takes him seriously about his cock-eyed plan. But her sister does. She’s battling a similar fate, being an outcast within her own family. Kate…marches to the beat of a slightly different drummer. Her reward…Cary Grant.

Oh boy, what can I say about “The Women” that hasn’t been said in 76-years? The idea of using an all woman cast is brilliant. I realize it doesn’t show women in the best light with the back-biting, gossiping and bickering. But it’s all in good fun. The lines still bite and the performances are stellar.

If you’re curious as to my tip top ten favorite movies of the 1940…you can check—> here.