I enjoyed “WENT THE DAY WELL?“ immensely. Hitchcock could not have done a better job of supplying tension, suspense and thrills. ( Actually, I kind of think Hitch would, but I want to leave a sliver of admiration for other directors ). 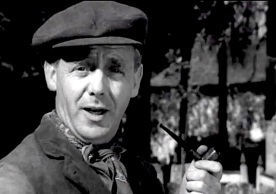 Director Alberto Cavalcanti has us vest our interest in the townspeople of this little English Village. You’ve seen these characters before: the Vicar, the busybody, your sexy Plain Janes, pub drinkers and those to the Manor born. Cavalcanti’s given whole slew of character actors a chance to shine, take the lead, be the hero and save the day.

And heroes all, they were. 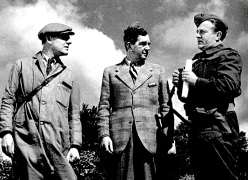 How can I speak of this movie without giving away its secrets? That’s what makes blogging sort of difficult. I’m speaking to you as though you know these movies already. Some of you do, some of you don’t. Maybe you can bookmark this post until you HAVE seen the movie. There! That’s the ticket, lets do that; bookmark this and promise you’ll come back to it once you’ve seen the film. But I’ll try my best NOT to spoil things. Now, this isn’t “THE RUSSIANS ARE COMING, THE RUSSIANS ARE COMING.” “Went the Day Well?” is more like Ewoks fighting Imperial Storm Troopers. They didn’t pull bazookas out of their… bowlers. Everything they use is organic to what they have at their disposal. I’ve seen several of these actors before but the only one I was really familiar with was David Farrar ( of “BLACK NARCISSUS“-fame ). Oh my my my. David! 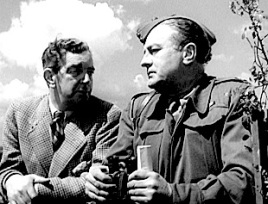 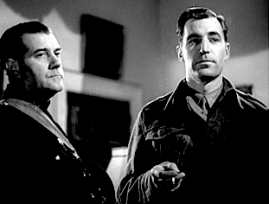 How insidious and dastardly and cowardly clever a plan it was for the Germans. How un-fair and particularly hateful those Nazis were. And how cold-blooded they carried out their mission!

Several characters don’t make it to the end of the movie and their demise caused unexpected audible gasps. Each one broke my heart. The announcement that the children would be killed made my blood boil; Farrar’s character makes this vile decision drunk with wine. What the heck! What IS this?!

“Went the Day Well?” Is no 8″ x 10″ glossy Hollywood movie shot on the biggest, most ex-pensive of M-G-M sound stages. Yes, “Went..Well?” is a movie, of course, but somehow it seemed so real. Perhaps it’s b’cuz the folks were ordinary joes like me. I could identify with the townspeople; just plain folk. You see, with Hollywood, at the end of the day, no matter how plain they tried to make Ann Sheridan and Errol Flynn be part of the Resistance, they still had that glam Oooomph thing going on.

WHEN EVIL WALKS AMONG US

This was one of the most cowardly infuriating things I’ve seen. You know what I’m talking about. Evil…with its arm in a sling. This was the most Hitchcockian element of the story: your villain…nondescript, polite. He walks among them, unsuspected, unsuspicious. And the plot chooses to show who he is in another Hitchcock element: give the audience more information than the characters in the movie. That’s another reason I liked the film. I knew who the bad guys were…which didn’t do my heart any good.

…I had to swallow my screams. 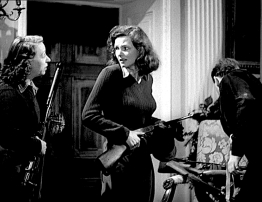 This leads the sweetest moment in the entire film for me. And my silent cheers. I doubt if this were a Hollywood picture, they would have let her pull that trigger. ( Yea Ealing! )

This movie was very well-done. It had me on the edge of my seat. It showed me the bravery, heroism and courage from male and female alike. Women weren’t regulated to just bandaging the wounded and serving high tea. They held their own in defense of their home and country. I rooted for Georgie…was saddened for the telephone operator…despised the Nazis…and cheered as the film came to its exciting climax.

A world was created, peopled with characters you care about. I shudder to think if I could step up to the plate or not were I in their situation. I recommend “Went The Day Well?” And this recommendation is coming from a CineMaven who totally and absolutely resisted seeing this movie in the first place. Made in 1942, the war in actuality had three more years to go of blood sweat and sacrifice. But like I wrote earlier, maybe circumstances like these helped end the war just a wee bit sooner.