Can a woman really “have it all”? This ‘EITHER / OR’ situation of choosing to EITHER stay home OR be in the work force ranges from the serious to the comedic in classic films. There are various reasons for which side of the fence women and men are on on this.

Movies show there is always a conflict for the woman in these situations. This is every woman’s own personal decision…but maybe Hollywood has influenced us just a little bit on either our choice or, how we view others’ choice. I offer you a couple of examples of what happens when a woman tries to have it all…and please chime in with examples of your own.

Mildred Pierce has no choice but to hold down a job and the home front when she divorces her husband. She parlays her job as waitress into a franchise of restaurants. She’s also got a new man in her life. Seems like she’s managing this balancing act. There’s just one fly in the ol’ baking batter: Veda.  (  No pie for Veda.  )

While Gene Kelly gleefully pro- claims “GOTTA DANCE!!!” clicks his heels and shines his pearly whites without a care in the world, Moira Shearer’s character in “THE RED SHOES“ ‘gotta dance’ dreams must mean life or death. She’s being pulled in two directions: she wants to be a prima ballerina, and she’s being pushed by impresario played by Anton Wolbrook. But she’s also fallen in love with a young musician (Marius Goring). She’s dancing on the head of a pin.

It’s so nice to have a man around the house…hey, where’d he go?

In “A LETTER TO THREE WIVES” Kirk Douglas is a teacher and wife Ann Sothern works in radio. Who wouldn’t want a two-income family? With his teachers’ hours he can be there when the kids get home from school and help out around the house. Of course radio’s hours are a little longer, and she’s on call a little more than he, to keep the sponsors happy. She might not be available all the time, but she is contributing financially to the suburban life- style and exclusive country club they’ve become accustomed to. It’s all good …except its created a vacuum that the 0ther Woman – “Addie Ross” – is willing to fill. Is it Ann’s fault she works for a living? 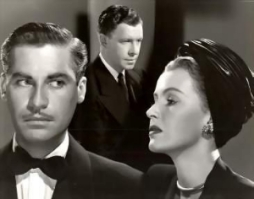 And after the dishes are done and the floor is vacuumed, THEN whaddya do?

“THE ARNELO AFFAIR” – Yes George Murphy is self-absorbed with his job as lawyer and has little time for wife Frances Gifford. And no doubt, John Hodiak is clearly more exciting than  George Murphy. But don’t you think if Gifford had gone back to work as an Interior Decorator, instead of being a stay-at-home mom, she would have been busy designing homes and not have so much idle time on her hands to be lonely for Murphy and fall for the charms of smooth and charming Hodiak? How many times can a gal go to lunch with Eve Arden.—> ( See the movie and read this nice blog post by Citizen Screen about Arden in “Mildred Pierce“ ). ( And another P.S. Gifford and Hodiak worked together a few years before in “Marriage Is A Private Affair.” )

I guess I’ll give Katharine Hepburn the last word on this subject. She is to have said:

“I think that the reason people have an affection for me now is that I have lived a life a lot of women think would have been a nice life to have lived. Dignified but free. They think I’ve done what I wanted to do. They don’t bother to think that they might have five kids and I don’t. But I have brains enough to know you can’t have it all. You just can’t.”

This article sums up my exploration of women having to choose between working in the home or having a career outside the home in “Woman of the Year” “His Girl Friday” and “Weekend Marriage.”