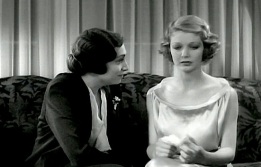 “If you just know the six sentences to say that
would make him propose, would you say them?”

This is the question Aline MacMahon proposes to Loretta Young to hook that special guy. A whole lot of cards are dealt from the bottom of the deck on both sides of the gender gap in “WEEK-END MARRIAGE.” These cards are strewn about like rose petals in Reno.

Love on the Rocks

In this story about inter-personal relationships between men and women, for and against marriage, Lola ( LORETTA YOUNG ) has a perfectly respectable, reasonable, economically sound approach to entering a lifetime partnership ( marriage ) with her attractive but childish object of affection Ken ( NORMAN FOSTER ). She wants to keep her job and contribute her salary to their household. This doesn’t sound revolutionary to me, but I’M living in 2015. As she tells her friend Connie:

Connie ( Sheila Terry ): “Gee, that’s swell Lola…If I don’t marry him soon, Joe says he’ll marry somebody else. Now that he has money, he wants babies. That’s all they ever want.”

Lola: “Don’t be a fool Connie. You stick to your job.”

I. Her husband’s short-sighted skepticism:

Ken ( Foster): “Man doesn’t like his wife working in an office. He wants to work for her. Wants her waiting for him when he gets home.”

Lola ( Young ): “Oh Ken, you’re hopelessly dated… Don’t you see dear, I want to help. I don’t want to be a drag on you. And if you let me keep my job, everything’ll be so much easier.”

Lola: “Well, as long as I feel like working. Or until I feel I can afford not to.”

( Dude, you can take care of me all you want, but can I keep my own money then? )

II. When we see Ken wearing an apron and cooking dinner or shopping for groceries.

His sister-in-law sees he has his hands full

You see, what’s baked into the fine print of the marriage vows along with regular, legally sanctioned bouts of “Whoopee!” is the fact that she is expected to keep up with the housework: cooking, cleaning, shopping as well as do office work. I got the pre-code shock of my life when I saw Young and Foster cuddling in bed together. The same bed. The…one…bed. That looks hopeful, grown-up and progressive for movies. Yay Pre-Code.

My jaw dropped but I ain’t seen nuthin yet…

As the movie goes on, they’re like ships that pass in the night, unable to coordinate their schedules. He makes a mess making pork chops…she comes home to a messy house.

A woman’s work is never done, even when she comes home from work…

Troubles begin when their fortunes change. She gets a raise…

“The time has come when I’ve got to go to St. Louis. Things are in a horrible mess out there…and here’s the point. It would help me a lot to have you along. Of course I realize your responsibilites as a wife and all that. Well there it is. And if you intend to keep on with your career, I think it’d be a very good opening for you. You’d get $50 a week to start and your position would more or less be executive. As a matter of fact, you’d be my assistant.”

How refreshing. No strings; just merit. Gee, this is swell but…

…he loses his job

HE:   “I got cut today. They’re eliminating the Foreign Department. I can have a job for $30 if I wanted.”

SHE: “Nevermind honey. It all amounts to the same thing. I got a raise today.”

SHE: “But Ken do you think that’s nice?” 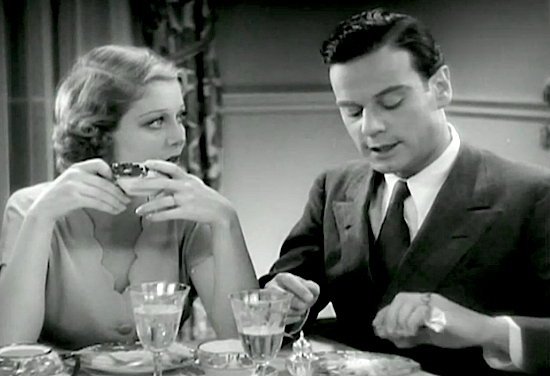 What the… ACK!! On the face of it, I can’t see a thing wrong with earning more money, es-pecially in 1932. Young is glad to contribute until Foster gets back on his feet. But look at the way it’s all framed. This is how the movies set us up: ( “Money?  MONEY?!! She don’ need no steeenking monaaay!!!” ) Each raise she gets jeopardizes her relationship.

( Scroll down just a little more to see page 2 of my argument. )