See what happens when a woman, who realizes she can’t “have it all”, decides to quit her job to concentrate on being a wife… 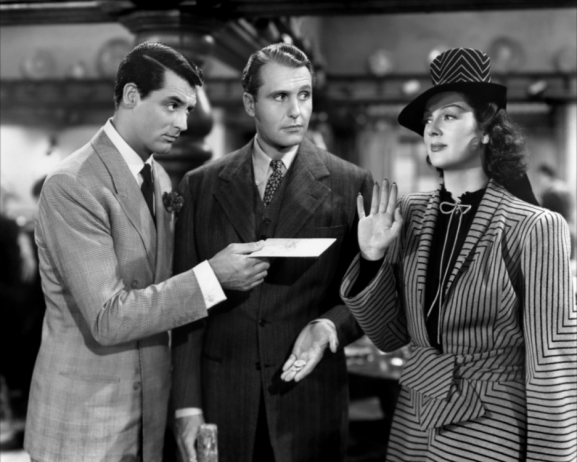 “HIS GIRL FRIDAY” stars Cary Grant as newspaper editor Walter Burns and Rosalind Russell as his ex-wife and ex-star reporter, Hildy Johnson. Howard Hawks directs this mad, dark, frenetic, comedy. “HGF” is not unlike that other screwball classic “Twentieth Century.”  In both films, the women are trying to extricate themselves from an exhilarating but destructive relationship with a man who offers them no emotional stability and is dishonest with them at every turn. Mean-spirited you say? I say squirrels to the nuts, this ain’t for the sensitive and faint-hearted. Every one and every institution is raked over the coals. Nothing’s sacred and if you can’t take the heat…this ain’t the kitchen for you.

In this film, Hildy comes back to her old newspaper to say goodbye to her newspaper gang, her ex-hus-band / boss and her old life. While trying to put a period to her old life, a convict escapes and he’s just red meat for some hungry newspaper men. For the first time, I was really struck by the cacaphonous ‘Moment Of Truth’ for Hildy. The moment she has to make a choice between marriage to stalwart Ralph Bellamy or a career as a journalist. The moment entered my consciousness clanging like a fire engine bell. It presented Hildy’s dilemma in a most extreme way.

As Hildy feverishly types the story of the capture of es-caped convict Earl Williams, she’s be-ing pulled apart by the two halves of her life: her fiancee Bruce (Ralph Bella- my) = Home & Hearth and ex-hus- band Walter (Cary Grant) = Profes-sional Career. Both men love her, in their own way, and Hollywood being Hollywood shows the stark contrast between the two men. As she’s besieged by both men arguing their case, Hildy must choose. No more stalling or delay. Which half will make her whole. The crescendo of the scene is handled masterfully by the three pros ( …and kudoes to Howard Hawks. ) The choice is not hidden behind a little voice in a guilt-ridden’s woman’s head or a waffle toaster. It’s an outside voice, yelling and screaming and talking over other voices fighting to be heard and chosen. And Hildy finally chooses:

“If you want me Bruce you gotta take me as I am instead of changing me  into something else. I’m no suburban bridge player. I’m a newspaper man.”

When push comes to shove, she chooses the cut-throat world of unscrupulous gypsies. She’s a reporter. Newspaper ink flows through her veins. Hildy chooses a career over marriage…marriage to Bruce, that is. See, there’s the hitch – Walter is part of her decision. There’s still love there. EiITHER Hildy is actually getting the best of both worlds being a reporter and married ( again ) to Walter ( and I say be careful what you wish for ) OR she’s making the same mistake, twice. Maybe Walter’s learned something; he almost lost her. Naaaah, he hasn’t learned a thing. This is not a happy joyful positive-take-on-life comedy. If you’re looking for that, that’s not this. It’s a satire, and hard-hitting. ( Ben Hecht and Charles MacArthur, were newspaper men, remember? )

And let me give a brief shout-out to the performances of our two leads, Cary Grant and Rosalind Russell. If you look at each of their careers ( Grant did “In Name Only“ and “My Favorite Wife“ before and after “His Girl Friday” and Russell did “The Women“ and “Hired Wife“ before and after ) you can see that they’ve not done a role like this before in their career. Grant’s comedy was screwball and very broad and Russell in “The Women”…well you know Russell in “The Women.” They’re both excellent here. Grant might have the easier or tougher job as Walter Burns. He’s a shark. He’s relentless. No soft moments, no compassion for guppies who happen to swim his way. He’s on a search and destroy mission: Get-That-Story is his raison d’être. He’ll do anything or say anything to get it. Have we seen Cary Grant ruthless yet in his career? Doing it this funny way takes the edge off of ruthlessness.

Russell’s performance should have earned an Oscar if not at least a nomination. Let’s see who was nominated for 1940:

Sorry, I’m picking Roz and you know, Bette Davis is my girl. Russell played the part several different ways within the movie. She was funny, sarcastic, helpless, withering and compassionate all the while being competent in her job. A great scene is when she goes to the prison to visit Earl Williams ( played in mousey glory by Norwegian actor John Qualen ). She’s sympathetic in that scene but cagey as well in trying to get a story and trying to give him an alibi for why he killed the policeman. When her interview is over with him, I’m haunted by the sheer way she says to Earl, “Good luck.” I think I felt her shame. Russell shaded her performance in many ways that I don’t think the edgy Hepburn could do. Gee, not even a nomination…

I am struck by the driving, anarchical force of “His Girl Friday.” And in the driver’s seat taking us to the edge of the cliff…is Howard Hawks.

He’s a master of many genres, and I’d say he had the Midas Touch with comedies like “Twentieth Century” “Bringing Up Baby” and “Ball of Fire.”

Hildy would leave that world until she couldn’t leave that world. Hildy needs to share her life with someone with her same world view. Hildy and Walter are made for each other.

Next week, read what happens to Loretta Young when she tries to have it all in “WEEK-END MARRIAGE.”