Folks lined up for Multiplex Theatre 4. Photo
by Danny Reid of Pre-Code.Com 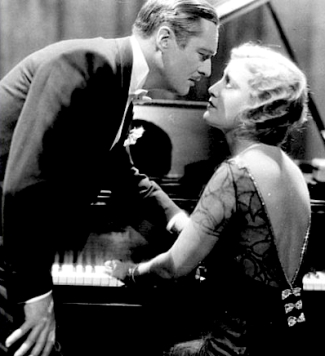 This movie is one of Jeanette MacDonald’s  very few non-singing roles and she does nicely as a straight actress. In the film, Edmund Lowe  is quite the ladies’ man; so much so that he and his friend decide to get away from all daughters of Eve on their yacht. In arranging for some alimony for his ex-wife, he talks to lawyer Roland Young  and they have a discus-sion on the merits of women. Lowe is cynical; Young is patroni-zing. Young bets Lowe that he can’t get a kiss from the first woman that comes through the balcony door. Uhmmm, we won’t count the maid (  Louise Beavers  ) who walks into the room.

Who does walk through the door is Young’s wife played by Jeanette MacDonald and that doesn’t sit right with him. And wait till MacDonald finds out about the bet…things really take a spin on the pre-code side. She wants to explore this with Lowe and feels she has license to because of the bet. It’s a sticky wicket for Young. She’ll test the waters to see if she’s a good girl, or bad wife.

I thought the movie was okay. The audience liked it better than I did. Perhaps I can get a pat on the head for trying something different in my movie menu. Maybe the screening came too close to me having seen the Lubitsch film and it suffered a little by comparison. ( Oh yeah, I’m all about Lubitsch now – I suppose I’ll have to add “The Merry Widow“ and “The Love Parade“ to my list ).

The pacing felt slow, and pairing Young with MacDonald as husband and wife seems like a crime against nature. ( Forgive my bias. I just don’t know how squirrelly chaps like Roland Young or Charles Ruggles EVER got a girl in the movies. ) Lowe and MacDonald had nice chemistry. And there’s the great Una Merkel  too who gets a good lion’s share of facetime. Now sometimes things slowed down for me while they let Merkel wax on and on, but it was interesting to see her really have the spotlight because after all…it is Una Merkel. The plot twist was good having McDonald in on the bet and working it to her advantage ( as a married woman ). And making it all the more interesting is their genuine attraction for each other. Fellas, don’t bet on women!

And now for something completely different:

Fair enough, you might not like his comedy and admittedly, I’m all over the map with a broad sense of humor: sophisticated, screwball, slapstick. You can slay me with a banana peel or dazzle me with words. There was Chaplin’s Little Tramp and Keaton’s Stone Face. The Marx Bros. were anarchists. W.C. Fields’ screen character has to be the most put upon man in comedy and it’s all there in “The Bank Dick.” 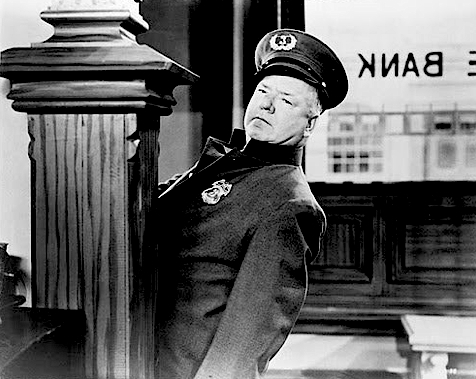 The movie is just out and out funny to me. See, he has me at his walk; those mincing little heel and toe steps tickle me. I’m already primed to smile. Fields can’t get through a door without some tic or incident propelling him through the force field. He gets in his own way. He stumbles and bumbles. He can’t put on his hat. He has no business acumen. He’s so easily scared he scares himself. And he drinks…a lot. Even getting a shot of booze requires some OCD shenani-gans with a tumbler of water. Here, Fields is Egbert Sousé – I know I know, but it’s pronounced Sue-zaaaay, accent grave over the “é”. He doesn’t appreciably do anything to support his family. I suspect they’re on Welfare. Besides, with a family like his, you’d join the Foreign Legion.

Egbert’s family…leeches and hangers-on who suck him dry

The movie is cast with some of the greatest character actors in show-business. You might not know the names but if you saw them, you’d smile: Cora Witherspoon ( tearing into a piece of chicken is funny after always seeing her as a Society dame ), Jessie Ralph ( the look of contempt on her face is priceless. I can hear her thoughts now: “And I held my own with Garbo in ‘Camille‘,” ), Evelyn DelRio (as Fields’ kid and she ain’t scared of him either), Grady Sutton, Franklin Pangborn, Shemp Howard, Russell Hicks, Pierre Watkin and Una Merkel again. They are all UP to the task of fooling, growling and pestering Fields. And they all do their trademark schtick in the bargain. Fields’ twisty turvey words tickle me. To cower Sutton into buying some bogus stocks, Fields tells him:

And the close-up shot of the weak handshake the bank manager gives Fields made me bust out loud laughing. ( Shiny objects mesmerize me as well, I’m easy ). Writer Mahatma Kane Jeeves ( Fields’ nom de plume ) weaves these disparate incidents into a well-oiled tale that ends with a funny ( and well-timed ) car chase that I can’t even imagine HOW intricate and serious it was to film. Of course, all’s well that ends well as Egbert traipses after his bartender down the road.

Fair enough, you might not like his comedy and I’m admittedly all over the map with a broad sense of humor, but I say give in to him and you won’t regret it. He’s a smart comic. I know now that W.C. Fields is a comic genius; he melds verbal and physical comedy together along with sly sly ( you have to be smart to spot ‘em ) comic bits into a cohesive piece. ( Scroll here  to check out his bit with Mr. Muckles and kumquats ). 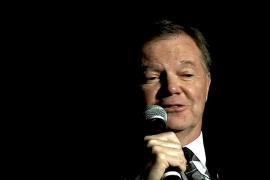 W.C. Fields’ grandsons Ron and Allen Fields ( one of them looking very much like him ) introduced the film and were interviewed by actress Ileana Douglas. They offered us a brief glimpse into a man who took the world very personally.