Turner Classic Movies Classic Film Festival was in full swing March 26 – 29. Classic film fans from all around the country and the world ( Europe and Australia are representin’ ) came to laugh, cry, marvel, be surprised, hook-up and bond over the smorgasbord of films TCM has put on this year’s menu.

Now to be honest, there was a bit of fussing and feuding by fans about this year’s programming: “Not enough classics.” “What direction are you going?” “Why are the ‘real classics’ being shuffled into smaller venues.” “Grrrr!” Yeah, I was down with all that. I, too, was disappointed by the schedule. I wanted more classics from the studio-era of Hollywood. But I was talked down off the ledge…settled into the schedule…and imagined how different my festival experience was going to be. So, I’m here. I’m fine. I’m watching movies.

I offer my apologies now for any poor photography you may see here. I’m no Ansel Adams to begin with, and everything was done in a fast and furious pace anyway. F-stops be damned!

March 24th ( Tuesday ) –  During a 5.5 hour flight from New York City’s JFK I sat next to a very attractive gentleman…who had three children crawling, climbing, whining and spilling near me. ‘Dad’ bought me three Bloody Marys to make up for his little rascals, who he would trade off in varying combinations with his wife sitting several rows behind us. The lady in the aisle across from me praised me: “I don’t know how you’re doing it. You’re so calm.” I don’t know how I did it either other than realizing I had no choice but to deal with it, and he seemed sufficiently embarassed. Oh yeah…and the Bloody Marys.

As soon as I touched down at Burbank’s Bob Hope Airport ( the only way to fly into Hollywood ) and checked into my hotel room
( the first of two ), I threw my luggage down, changed my blouse and dove into Hollywood Boulevard on the hunt for my friends. I’m telling you NYC’s old Times Square area ain’t got nuthin’ on Hollywood Boulevard at night. Not knowing specifically where they’d be…and by the sheerest luck, I found them bellied up to the bar inside the Roosevelt Hotel.

Nice re-connecting with them; talking, drinking, laughing with not a drop or iota or scintilla of seriousness. ( Europeans are in the group so I must convert iotas into scintillas for the sake of inclusiveness ). There was the businessman with his tall tales and quips ( the plus-perfect tense, anyone? ) And the drink my friend bought for me that burned my mouth – ( what the heck ) which reminded me of a funny story with a marine… My evening ended with talking ( discussing…arguing…bantering, she knows how we roll ) to my friend on the corner of Hollywood and Highland and then in the hotel lobby about Marilyn Monroe’s place in Hollywood, in proportion to her iconic status. Bleary-eyed, hoarse ( and me not the least bit tired ), I must say that was the best conversation of my night.

March 25th ( Wednesday ) – I settled in to where I would hang my hat and rest my weary drunken head for this long weekend, the Hollywood Rubix off Hollywood Boulevard and N. McCadden Place: 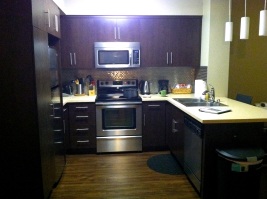 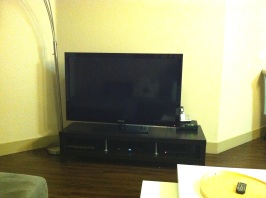 I never turned that tv on. I had the real thing.          The dining area aka my editing station. 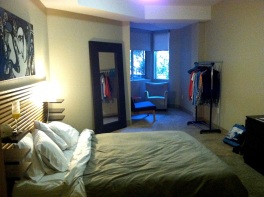 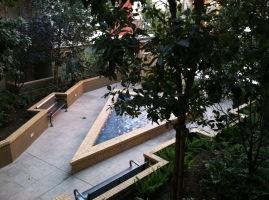 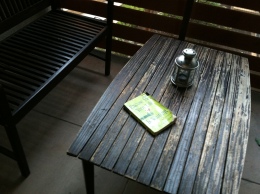 The balcony. A nice quiet place to read or do a puzzle ( HUH? ) Yeah, I didn’t do either.

I joined friends as they finished up breakfast at Mel’s and then we went to the Roosevelt to wait until swag time ( 2:00pm where folks could pick up their passes and gift bags from TCM. ) I got some buttons ( but no bows ) thanks to a man named Ed, and Citizen Screen and then timed my walk from the

Roosevelt to the Montalban Theater to prepare for something special in store for Saturday at that theater. Then it was off to the first of my pre-festival festivities.

Tweet-Up Meet-Up – I attended the #TCMPARTY  “Tweet-Up” held by the Roosevelt Hotel’s pool. The #TCMPARTY is a group of folks on Twitter who’ll have a group Tweet during a particular movie on TCM.
( Here is an example of a fast and furious session for the movie “Out of the Past” ). I’m pretty new to the group. Pretty new to Tweet-ing period, but I pushed myself to go. It was sweltering hot by the pool, but I’ve just had a New York winter in New York that was dismally cold, so I welcomed the sun. Here’s where you put the names with the faces with the handles. ( Whew! ) Though my shyness was kicking in in high gear, I enjoyed people-watching and the camaraderie amongst the group is pretty strong. Hell, I’m happy I was invited and hope to participate in more TCMPARTY Tweeting. 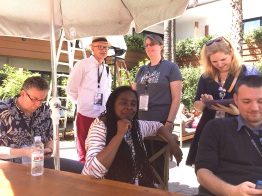 The people behind the names of Twitter’s #TCMPARTY – I’m telling you, you’ve got to be quick with this crowd.

Walking along Hollywood Boulevard, I had to stop for my girls: 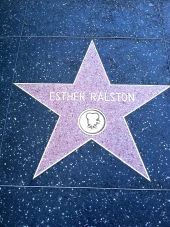 Click on each star to find out who they are. One of them was known as “The American Venus.” 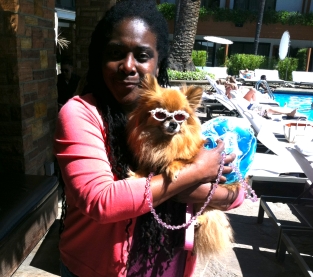 Swingin’ Soiree with Christaaay – Christy Putnam’s nom de plume is Sue Sue Applegate and she is just the big-hearted gal you’d expect from Texas. I call her a cross between Perle Mesta and Texas Guinan. She hasn’t socked me in the jaw for those comparisons, so I think it’s safe to say she knows these are compliments. She had a gathering at Musso and Frank where folks gathered before heading off into the night. I saw many there that I haven’t seen in a year. There were so many truncated simultaneous conversations going on that it would have sent Emily Post into a coma. But I think we all understand that we sort of gulp down 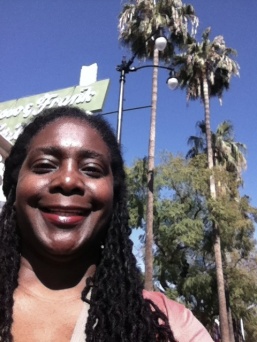 each other’s company because there’s so much to do and so little time. To tell the truth, as a Baby Boomer, I don’t always understand the festival community’s social interactions ( my friend said: “You think too much.” But that’s what grown-ups do, think things through. ACK! Another battle to look forward to  ) but hey…when in Hollywood, Hollywood swings like a juggernaut do. So, cheers:

I was lucky enough to sit between two interesting people, and therefore once again hide my shyness. Author Preston Neal Jones who wrote two books on the making of “Night of the Hunter“ and the making of “Star Trek, The Motion Picture”. He was a big ol’ teddy bear, to say the least with a gentle voice and very forgiving of me when I had to interrupt him to say “hi” to other folks  joining the group. ( Aargh! My father would have tapped me in the back of the head and my Mom would have given ‘the glare’! )

Monika Henreid sat on the other side of me. Her father was movie star Paul Henreid…

You know, tall, wavy-haired, handsome Paul Henreid from “Casablanca” and “Now, Voyager.” Talk about her being down-to-earth. And name-dropping? Ha! I lapped up her conversation like I did my martini. But come on, it ain’t “name-dropping” if you’ve known these folks since you were a little girl. Thanksgiving dinner with Bette Davis, playing with Fred MacMurray’s kids, hanging with Shirley MacLaine at Hef’s house ( Hugh Hefner!! ) Come ON! Love it.

I’ll drink to that.  ( Thanx Christy for the shots of me with Preston and Monika! )

YA MUSTA BEEN A BEAUTIFUL BABY…

Through the ‘Going to the TCM Film Festival’ FaceBook group, hosted by Kelly J Kitchens Wickersham, we got to meet child star Cora Sue Collins who talked to our group. It was fantastic. 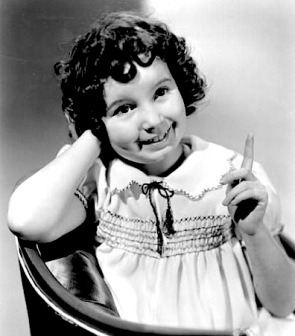 Ms. Collins stepped away from a successful career at eighteen for marriage, children. But while she worked in Hollywood, she was really a working actress. You can see her play Claudette Colbert’s child in “Torch Singer” or Myrna Loy’s child in “Evelyn Prentice.” She also played many stars AS children in various movies including in Merle Oberon in “The Dark Angel”, Frances Dee in “The Strange Case of Clara Deane”, Zita Johann in “The Sin of Nora Moran.” Most famously Ms. Collins was personally selected by Greta Garbo to portray her as a child in her 1932 film “Queen Christina.” ( Why TCM did NOT invite her to introduce the film was a missed opportunity and a mystery beyond mystery to many of us ). HAND-PICKED! ACK! Ms. Collins knew Garbo until her death. 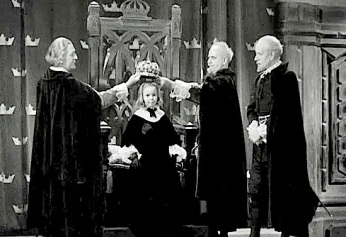 In the courtyard near the pool at the Roosevelt, an interview and Q & A was conducted with Cora Sue Collins which was wonderful. She was full of stories and memories. She was gracious, classy and a cutie. She broke her foot a few days before our event, but was a real trouper to still join us –
( Barbra… ). She remembers 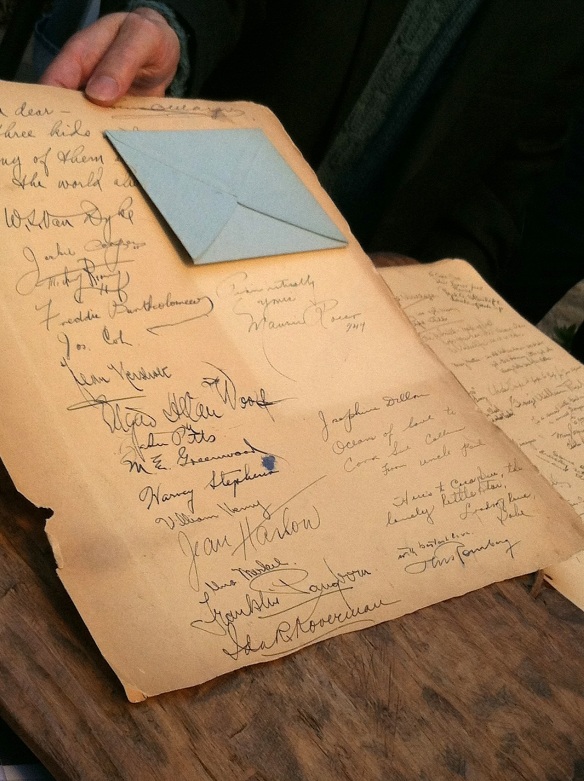 Cast your beady eyes on the signatures on this birthday card for seven-year old Cora Sue.

and maintained friendships with many of the grown-ups she worked with, and had a full and rich life outside of the industry. She had a great story about being baby sat by Lana Turner ( Gaaaah!! ) and being pampered by Lana with what we know today as a mani-pedi. Lana also shaved off Cora Sue’s eyebrows to the consternation of her Mom. ( She still has to draw on her eyebrows to this day. Oh yeah…she SHOWED us, too ). 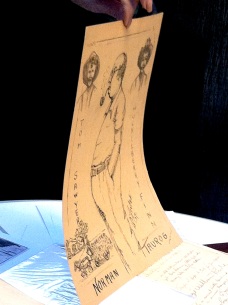 She told a bawdy story of Tallulah Bankhead and Lucille Ball with Desi. She knew Helen Hayes and just about everybody. But being a housewife and mother is what truly made her happy. She held our attention for a good two hours. This was a great treat.

Thank you Aurora for getting this shot of me with Ms. Collins.

CALIFORNIA’S SUFFERING A DROUGHT, SO MAKE MINE ALCOHOL

Hey, I’m just trying to help THEM out!

THE FORMOSA – Wednesday ended with the unofficial official unofficial start of the festival – the gathering at the Formosa. 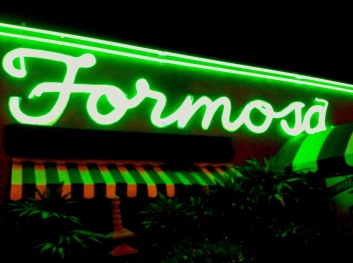 All the different tribes gather at the watering hole to have the annual pow-wow young / mature, chic / chic-er, home-town / tourist, East Coast / Left Coast, North-South and the rest of the World. I braved it alone by cab with a cabbie the Roosevelt valet had to instruct several times on HOW to get there? ( Wha’?! ) As soon as I walked into the darkened dungeon I heard someone call out my name. Yo! It’s Carrie Specht, who made me feel so comfortable. As the crowd of L.A. regulars drifted out 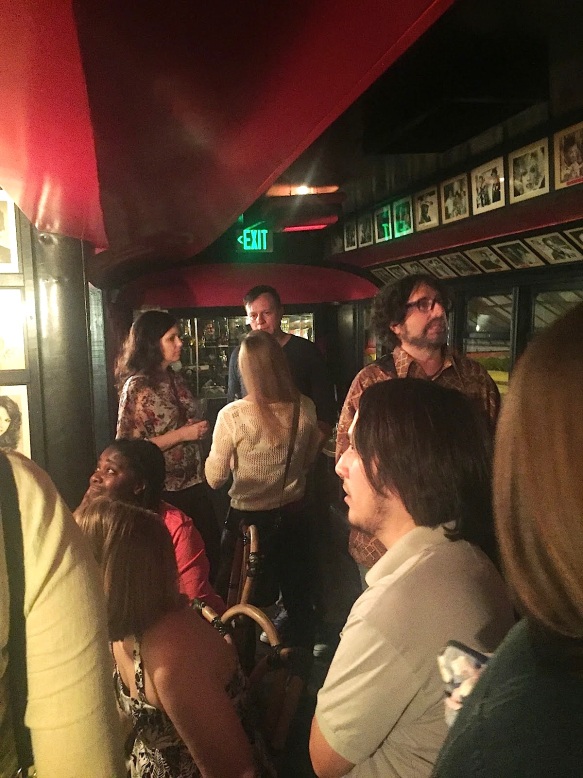 Photo taken by Raquel of the ‘Out of the Past‘ blog

of the club, the classic film crowd of all stripes poured in to mingle, drink and play catch-up. My own group of pals finally arrived and I hung out with them. For an introvert, it’s a rough scene but somehow my Dutch courage kicked in and the cacophony of talking was music to my ears. When the night ended, we all walked along Santa Monica Boulevard back to our hotel, in the balmy night.

Cora Sue Collins: —–> “It’s Fun To Be A Housewife From Phoenix.”