Heavens to Murgatroid…I’m no scholar. No aficionado. I have a passing knowledge of one…and am a groupie of the other. JOHN FORD and ALFRED HITCHCOCK are two of the most famous directors in the history of movies.

( Psst! I CONFESS: The reason I even put Ford’s name first is to curry favor from his fans so they won’t roast me on the luau pit. You understand, Hitchcock fans… ) Here are two young men from different backgrounds and different countries, telling stories through images. Their work will span decades and is still revered today.

A DIRECTOR BY ANY OTHER NAME

Fans in both camps have affectionate nick names for these two directors.

I was struck by these particular moments in both directors’ films for a variety of reasons. These iconic moments are instantly recognizable by any fan of these two men:

I like the similarity of the doorway shots of Wayne and Stewart ( who’ll soon appear together in Ford’s 1962 classic “The Man Who Shot Liberty Valance” ). Are both men at the end of their rope here? One doesn’t seem to be able to get through the door to join The Family. The other has lost The Dream…the illusion. “North by Northwest” here just represents the Impossible. They are hanging by a thread. Hitch pushes the envelope even further in “NxNW” when he has Martin Landau step on Cary Grant’s hand. The tension is impossible. I love the shot of Roddy McDowall from “How Green Was My Valley.” This little boy is becoming a man waay before his time…seeing things a boy should not see. One grows up too quick, fast and in a hurry in coal-mining Wales. Roddy and James Stewart share the utter stunning loss that leaves them motionless. Frozen in time; not seeing. Am I reaching? Am I stretching. I dunno. You tell me.

THE LAWS OF ATTRACTION

I finally saw “The Quiet Man” at the TCMFF last April and was really taken with it. It was love at first sight for them both; but Wayne has to really fight for O’Hara’s love in a way that she would understand and feel. Oh yeah…that kiss in the graveyard when it rains. WoW! I haven’t seen “They Were Expendable” yet, but I want to. How to make love normal, under conditions of war…in spite of war. Besides, aren’t the Duke and Donna Reed so cute together? ( And both from Iowa, too. )  I have a germ of an idea to explore ‘John Wayne In Love’ in movies and what that looks like. He’s adorable and heart-felt. Cary Grant & Grace Kelly. << Sigh! >> Hitchcock’s creme de la creme of gla’mour and l’amour. Fireworks? Hah! What a great metaphor Hitch uses in “To Catch A Thief.” “Vertigo” – my favorite as you know. Is love built on deception, delusion, illusion, obsession not really Love?  Perhaps it’s the love that burns the hottest. Hey, I’m just asking questions. 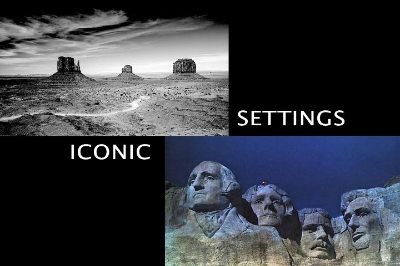 Hitchcock and Ford took two American landscapes and turned them into their own personal avatars. I need to see both of these up close and personal. You can’t think of either setting without thinking of the director who used them. They’ve made them their brand. I mean, who does that?

C’mon. You know you breathed a sigh of relief when both Wayne and Grant take these ladies into their arms. 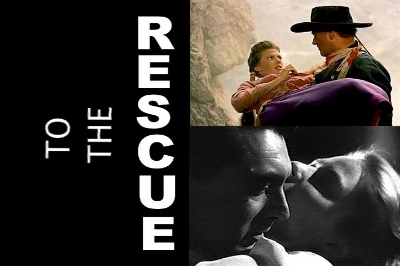 Both men come to terms with the journey they take to rescue someone they really love. They stop fighting themselves and their pre-conceived notions and get to rescuing. Admitted “fat-head” Cary Grant scooping a poisoned Ingrid Bergman outta that bed is the stuff of dreams, right girls? Who cares if you need a stomach pump. There’s a den of Nazis downstairs in “Notorious” and Cary Grant is whispering in your ear: he’ll protect you. John Wayne as Ethan in “The Searchers.” Hell bent in his search and destroy mode until Debbie’s in his arms. All his hate is released. After all, she IS Family. Ford and Hitchcock show these men come to the rescue. ( …about time, fellas. )

The mind is a terrible thing to waste… 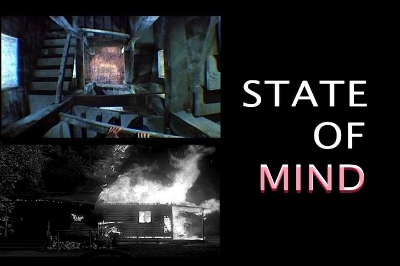 …But a great set-piece is a wonderful metaphor to use. Each director expresses our hero’s state of mind in a different way. That crazy staircase that is James Stewart’s source of guilt and triumph. He’s cured of vertigo though he loses his girl. ( The operation’s a success but the patient… ) “…Liberty Valance.” You all know the movie better’n than me. I just know seeing Wayne go loco with pain over not having Vera Miles broke me down. The MacGuffins of both movies hide the lovesick pain in plain sight.

TWO HEADS ARE BETTER ‘N ONE

Andy Hardy never had such a man-to-man talk.

Collaboration at its best. I think Wayne and Grant might be Ford and Hitchcock’s favorite leading men. What director wouldn’t want to live vicariously through the suaveness and virility of each man. Big, strong, handsome men of action. Alter egos of each director.

Perhaps this is a cinematic Rorschach test. Hopefully this post will spur folks more knowledgeable about each director, to contribute their thoughts on the similarities of these two men. I’ve merely scratched the surface.

9 thoughts on “FORD & HITCHCOCK: A TALE OF TWO MEN”