Broderick Crawford IS King Kong. Yes, absolute power corrupts absolutely…and loses everything. How did he even get PICKED for this role? Helen Broderick’s baby boy.

It’s Brando. And if just saying that isn’t enough of a reason, you’re right. It may be chic to knock him now. But he gives a wonderful performance. He was different and interesting. He worked from the inside out. 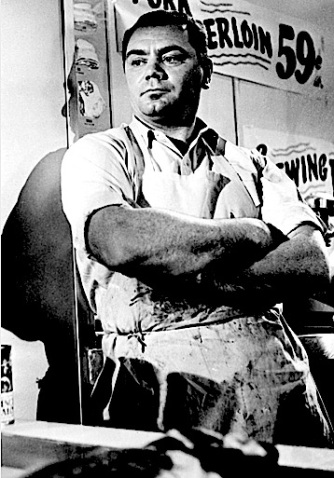 To come off of “From Here to Eternity” as the sadistic Fatso and be this sad little man is a testimony to Borgnine’s acting. His pathos will break your heart in this movie. The suspense of his almost blowing the best thing to come into his life is killer. “Whaddya you wanna do?” “I wanna win an Oscar!” Well you did Ernie, ya DID win an Oscar!!! Well-done.

A spine of steel…and as wrong as he could be. To see him realize in that one moment, his wrong-headed, misguided decisions is a thing to behold. Guiness holds your attention. As an Actor should. And he’s An Actor.

I find Peck’s earnestness an aphrodisiac. He is a man of quiet strength and integrity in this. And he’s handsome as all get out. He always is different in each perfor-mance. I am in love with Gregory Peck. There, I said it out loud!

Oh no doubt he’s a monster. But why did I find him ingenious and brilliant and charming. Ohhkay… I’m funny that way.

He gives such a great perfor-mance as a man dying of AIDS still fighting for his right to be treated humanely, fairly. Grand job Tom.

His testosterone makes me swoooon. But that aside, I think Russell Crowe did a magnificent job as a gladiator, fighting to get back to his family. Crowe’s a very fine actor; hunkers down into the depths of the characters he plays. His off-screen antics get him into a lot of trouble and after all, the Academy IS a popularity contest. Play the game…win some Oscars. Or be like Russell Crowe – the games be damned; judge him for his talent.

NEXT: My Favorite Performances for BEST ACTRESS…