The war is over and things are still a little dark on my list. I’ve seen thirty-five movies this year, and what a wonderful year for movies. I mean how can I go wrong with a list that contains the gorgeousness of Cary Grant, not to mention The Blonde, The Brunette and The Red Head of the 1940’s. 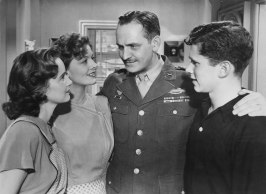 You have to be ready to invest your time with this movie. Wyler covers the waterfront with the depth and breadth of what war does to those who serve and those who stay at home. They may be at home, but time does not stop for them. The film is cast perfectly with us following the story of three soldiers whose assimilation back into society is very different. Thoughtfull, layered, a very well-deserved choice as the Academy Award-winning BEST PICTURE.

MY FAVORITE MOMENT: The last scene in the film – Dana Andrews walks over to Teresa Wright and kisses her to swelling music. Her hat falls and their kiss goes into the fade-out. < SIgh! > A life-affirming masterpiece. 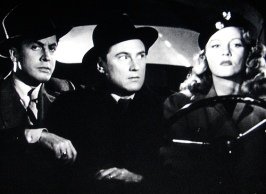 You see that look on Herb’s face? That’s not the look of love. It’s the look of fear when the girl you love is crazy, and the man next to you is a gangster. Yeah, you’re being taken for a ride in this interesting thriller. Gangster Robert Armstrong ( years away from his hamstringing King Kong ) has died in the gas chamber, but is revived by Rudley in order to show Gillie where stolen money he stole is buried. Even a mangy old cat knows not to give its nine lives to a money hungry blonde. Jean is wonderful in this, 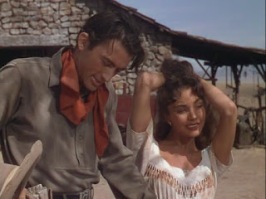 Yeah yeah yeah, I know what they dub this movie. “Lust in the Dust.”

I love it. It’s big. It’s sordid. It’s Cain and Abel. And the prize…Jennifer Jones. I thought she and Peck played against type. Selznick tries to outdo “GWTW” and some think he made a mess of it. There were a lot of movies to choose from in 1946. But this one gets me. You’ve got a Gish, a Barrymore, a Houston and a Butterfly in this epic. And Peck’s bad boy is like Cary Grant in “Notorious” – too stubborn to admit he flat out loves Jones; could have saved himself a lot of trouble. But, what woman sometimes wants to have a shoot-out on a mountain top with her man. 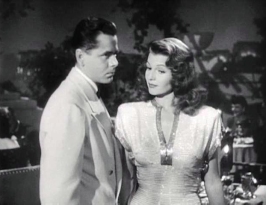 One of the best acting performances of her career. She goes from sensuous to hurt little girl to temptress to simply, just a woman in love. It’s a great S & M classic.

You can read my full review of the movie—-> here. 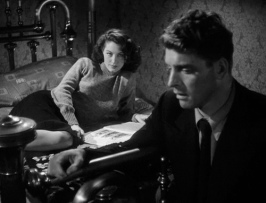 <——-I love this shot in the movie. He can’t look at her, and she’s in control. Don’cha love a girl who can double triple cross you?

To make this noir souffle, start with a smoldering Ava, add a pinch of lovesick Burt Lancaster ( in a t-shirt ), swirl a Hemingway short story into a taut tight mystery. And voila, you have one of the classic films noir of the 40’s. Ahhhhhhh…delicioso.

FAVORITE MOMENTS: ( * ) At the party where Burt sees Ava for the first time, the resigned look his date, Virginia Christine gives as she watches Burt fall for Ava. And later, how she sits on Sam Levene’s lap now happily married to him.

( * ) In a room full of men, Ava tells husband Albert Dekker: “You touch me and you won’t live till morning.” Come on, admit it. The girl’s got moxie. The girl’s got chutzpah.

( * ) The jig is up and Ava pleads with a dying Albert Dekker for an alibi. I love Levene’s line: “Don’t ask a dying man to lie his soul into hell!” It’s the best line in film noir. 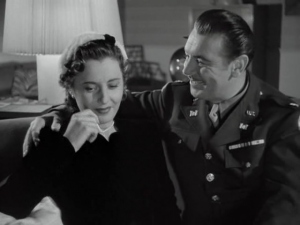 Yeah, it’s a woman’s picture. It’s sort of Stanwyck’s version of “Now, Voyager.” She’s a widow dominated by her mother, repressed, has no real life of her own but lives through her two sons. A tall handsome soldier will bring her out of her widow’s weeds. Yeah, it’s a ‘Woman’s Picture.’ Wanna make something of it?! One of my favorite Stanwyck roles. She’s nice and doesn’t have to blow the house down. Good seeing her with her ol’ screen pal, George Brent. They have chemistry. And by the way, Eve Arden is her best friend. 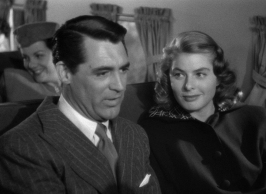 Hitchcock does what Hitchcock does best. Suspense. The crane shot down to the key. The uranium bottle smashing. Evil right in your face. A mother-in-law like Madame Konstantin. And then there’s the rocky romance of two people who you know should be together from the very beginning. What a great story, by a master storyteller. By the end, Grant rescues his lady fair. But not before letting her get mixed up with a pack of Nazis. Hitchcock.

MY FAVORITE MOMENTS: Grant and Bergman on the balcony. No, not the kissing the scene. These two:

( * ) When he comes back knowing her assignment. Bergman quietly pleads with Grant to tell her how he feels; to tell her what he could not tell them. Awww man Cary, tell her, you dope! I can’t quite give you a pass for being a fat-head. ACK! ( Well…maybe…I…can.  )

( * ) Bergman’s admonishment:  “What a little pal you are, Dev. Right below the belt every time.”

Grant and Bergman will meet up again twelve years later, in a comedy “INDISCREET“ which you can read a little about here in my friend Christy’s article. 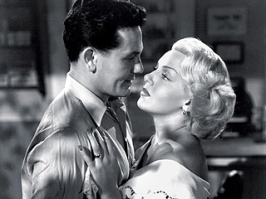 It’s the roll of a lipstick case that gets the uhhh, ball rolling. Who’d have thunk there’d be all this drama in a California roadside diner. With an older man, his young wife, and a young virile drifter in the mix, what could happen? Murder is hatched and baked in the hot California sun. You know, down the road from MILDRED’S. Murder doesn’t smell like honeysuckle. It smells like burning hamburger. And don’t worry “OSSESSIONE“ is on my ‘to watch’ list. 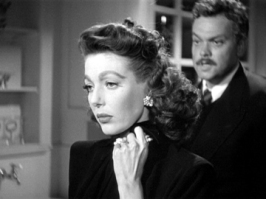 I’m new to this movie and this movie is new to me. It’s a new favorite and definitely one of my top picks for this year. Young marries Welles and now she and her New England town have a dyed-in-the-wool Nazi on their hands. Since we know more about her husband than she does, we watch with baited breath as Young discovers her professor/hubby is not what he appears to be. Welles and his nemesis, Edward G. Robinson are great in this cat and mouse game. ( I read Agnes Moorehead was considered for the Robinson role. My mind reels at how great THAT would have been. ) I swear Loretta Young is two different women; in the 30’s she was a doe-eyed, pre-code hottie and here in the 40’s her mature quiet beauty screams respectability and reserve. I was impressed by the suspenseful way the story unfolds, and with Young’s acting. Richard Long was very good as the kid brother.

FAVORITE MOMENT: Young screams at Welles not to touch her and hands him a poker to kill her with. ( “Use this!” ) 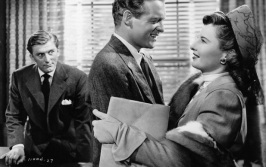 Murder, mystery, blackmail and sick twisted love all rolled up into black and white glory. I love love LOVE Stanwyck in this. She’s not evil. I think Martha Ivers is just, well…misunderstood. She’s a business woman covering up a dark secret from childhood. That’s got to take a toll on a gal; makes her do the things she does. Van Heflin unknowingly opens a can of worms as the childhood friend who realizes too late he ‘can’t go home again.’ A husky voiced blonde ( Lizabeth Scott ) needs a fresh start but gets entangled in the Ivers web. And a weak-willed husband ( Kirk Douglas in his screen debut ) drowns his sorrow in alcohol knowing he’s married a woman who despises him. Keeping and unlocking secrets. Miklos Rosza’s music. Stanwyck and Scott facing off. What’s not to love. 1946 – it was a very good year for movies.