The war has ended. I’ve gone to thirty movies this year while the world became safe for democracy. I’ve enjoyed a few heartwarming family films this year (“Christmas in Connecticut” “Our Vine Has Tender Grapes” “A Tree Grows In Brooklyn.”) But mostly my favorite movie fare shows the dark and twisted side of love. Here are my favorites…in alphabetical order ~ 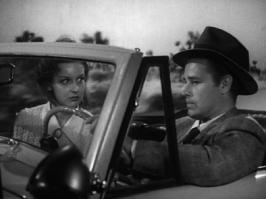 Who’d have thunk that hitchhiking would open up Pandora’s Box of worms? Things spiral from bad to apocalyptic for Tom Neal when he picks up Ann Savage in the desert. This girl is so tough she wears a Mohair sweater in the Mojave Desert!! With a limited budget and sparse sets, this story is economically told and a thing of beauty. Any more money and the picture’d be ruined. Edgar G. Ulmer rocks. He could make a feature-length film on your lunch hour.

McGuire has always been a favorite of mine with her voice of brushed velvet and her sincere characterizations. Robert Young is a vet from the 30’s but got a chance to play some complicated roles in the 40’s. He’s climbing the ranks with me. This is a good solid love story with a wonderful message: beauty IS in the eye of the beholder, and if you love someone, they are beautiful. Movie magic. 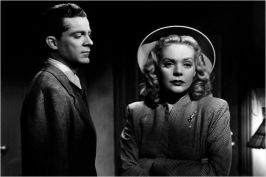 If you like your redemption with a twist of mystery, then this is your movie. Dana Andrews is a particularly bad boy as he marries Alice Faye for her money so he can be with Linda Darnell. I still don’t fully and completely understand the movie, but I like the dark mood of it. This was Faye’s last movie as she drove off the Twentieth Century lot and didn’t look back for twenty years.

You wouldn’t expect Erich von Stroheim is a fool for love, but he is. And he’s got it bad for Mary Beth Hughes. Hughes and cad-about-town, Dan Duryea, want von Stroheim’s money, and they go about it in the worst way. Von Stroheim is pitiable as he waits for a woman who’ll never come. Poor poor von Stroheim. Low budget, just the way I like ‘em. ( If you’re curious about Hughes, click on her photos above.  My friend “Mongo” wrote a litlte sumthin’ sumthin’ about Hughes as well.)

This is a real thoughtful drama, yeah with shades, slight shades of spookiness. A plague sweeps a Greek isle and with Karloff as a General who’s stuck on that island. I don’t know if the inhabitants are more afraid of the plague or Karloff. I’m thinking they’ll take their chances with the plague. Good cast, atmospheric. Val Lewton, you know. ( See what my
pal Fernando has to say here about “Isle of the Dead.” )

“I don’t envy you. I’m sorry for you. You’re the most pitiful creature I’ve ever known.” Gene Tierney gives the per-formance of her career in this drama of jealousy on steroids. She doesn’t gnaw on the scenery or pull on your heartstrings. Her stunning looks juxtaposes the bone-chilling lengths her jealousy takes her. She’s just outta control. We watch the web she weaves as she ties the noose tighter and tighter, for a Pyrrhic Victory. And in the face of all this, Jeanne Crain is not over-shadowed. Her quiet beauty, sweetness and resolve is an oasis for us. I love the quiet resignation of  the mother, played by Mary Philips ( …former wife of Humphrey Bogart. ) Cornel Wilde? Oh, he’s just an attractive deer caught in Tierney’s laser-beamed sights.

My friend and I talk and text about this classic. When you get a chance, read what we have to say here.

I just love love love this movie. It’s a tender love story with a Cyrano twist. As menacing as he was as ‘Uncle Charlie’ in Hitchcock’s “Shadow Of A Doubt” Cotten’s very different here. He plays hurt and damaged very well as Jones’ protector…with something to hide. We have two opposing intents in “Love Letters.” One person wants to regain her memory to become whole and love fully; and the other wants to hide a truth that may lose him her love. And lets hear it for Ann Richards who plays Jones’ best friend. She’s interesting. (  She’s also in “Sorry, Wrong Number.” )

“Get out before I kill you!” The audience had to have been in shock to see the shenanigans of Veda Pierce in this 1945 movie. After all, she’s sleeping with her mother’s love interest. I’m a little taken aback myself in 2015. What else can I add to this classic that hasn’t already been said before…and brilliantly. This is flat out a great drama and touches on all sorts of issues and levels. I love Joan in this; she subjugates her fierceness to be this masochistic, self-sacrificing Mother. But this movie would be nothing without Ann Blyth’s performance. Are monsters born or made? I think the movie is cast perfectly from Carson-to-Arden to-Scott. Yes, and even Bruce Bennett.

Eddie G. hasn’t got a snowball’s chance in Hell of escaping being burned alive in the clutches of sultry Joan Bennett, who herself, is in the clutches of Dan Duryea. Both Robinson and Bennett don’t realize they’re in the same boat: the S.S. Abuse and will never have the  person they want.  It’s already a known-fact that Edward G. can do anything. But when I see Joan Bennett in “Woman on the Beach” or “Father 0f the Bride” or “The Reckless Moment” I see why she is a leading lady of unsung treasures.Thanxxx to Fritz Lang, “Scarlet Street” has got to be the most ironic and devastating movie ending of the 1940’s.